David Boies not only acts as PDVSA US Litigation Trust counsel. According to three people familiar with the case, aside from legal fees, Boies is to get 22% of the 66% gifted by PDVSA. Bill Duker is to get another 22%. Then, there is an investigator retained by Boies, called John Brennan, who will get the other 22% according to sources. This whole thing was set up through an Engagement Letter that won’t pass the smell test.

The trust set up by Boies is meant to be funded by a vehicle called simply Algamex. Court filings show that Algamex representative is Bill Duker. Inexplicably, PDVSA ceded 66% of potential case proceeds to the trust, which Boies, Duker and Brennan will share in equal parts. 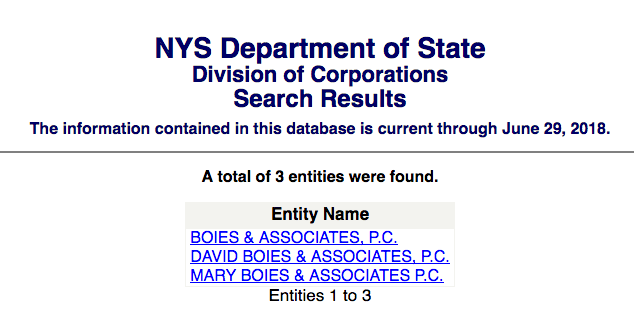 Fast forward 20 years. Boies is, by now, head of a very successful -in its own right- law firm. One of the least known facts about Boies’ career is his services to Venezuela’s brutal dictator, whose cocaine-trafficking nephews Boies defended.

That gig, representing drug-dealing Venezuelans, wasn’t just happenstance. Nobody walked to Boies, Schiller & Flexner offices. No Venezuelan regime official called him. Notice that Venezuela’s Presidency, or Petróleos de Venezuela (PDVSA) -generally described as one of the world’s largest oil companies, aren’t even listed in Boies’ website as clients, but they are.

Boies took on Nicolas Maduro’s cocaine-trafficking nephews upon request from his good friend, and long time associate, William (Bill) Duker. Let’s go back a couple of steps here for context.

In the murky world of PDVSA, every deal of size comes about by paying bribes. That’s just the norm. But sometimes extraordinary events bring rare opportunities. An oil strike back in 2002–2003 brought PDVSA’s production and sales to a halt.

Wilmer Ruperti, back then just a shipmaster, seized the moment and offered PDVSA’s top management a solution: he would charter ships to circumvent strike-caused blockade and get trade going again. Chavistas, desperate to beat striking workers, agreed and Ruperti started commercial deals with Novoship, Russia’s State-owned shipping company. Soon, Russian ships were moving PDVSA cargoes in and out of the country. Ruperti became a billionaire overnight.

Ruperti, though, is the kind of Venezuelan “successful entrepreneur” that gets to be sued -by the Russian State- for corruption. Having screwed the Russian partners thanks to whom he got minted, Ruperti would spent about a decade trying to mend relationships, both in Moscow and Caracas.

Eventually, he came back to PDVSA’s fold, through shipping agreements with new partners. When the deal got sour, Ruperti found himself -yet again- being sued for misappropriation of $260 million paid by PDVSA, which he pocketed instead of sharing with his partners.

Just how Ruperti managed to extract $260 million from PDVSA remains a bit of a mystery. Although sources familiar with the case say that Ruperti paid Rafael Ramirez, PDVSA’s former CEO, a $62.4 million bribe into a bearer-shares Panamanian company called Intercontinental View Inc. through an account at Lugano’s Banca Zarattini. 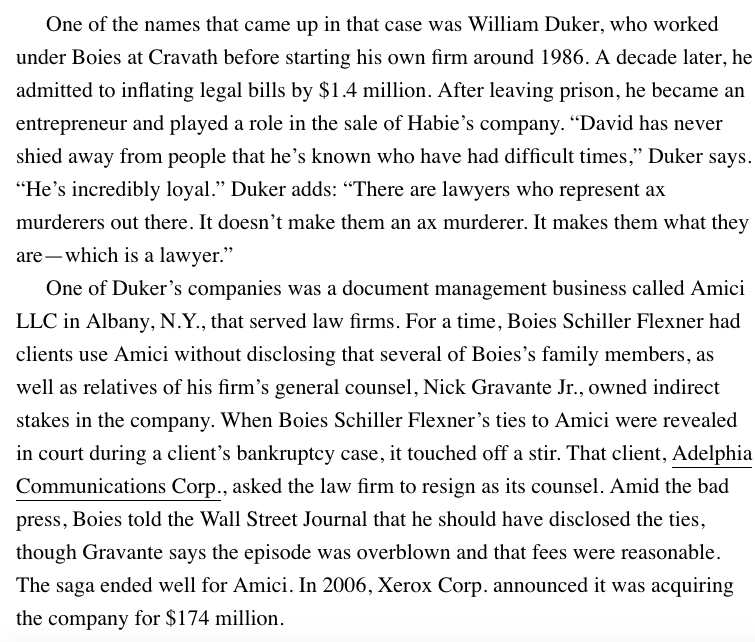 With that pile of fresh cash, Ruperti got himself a new yacht sometime in 2015. Island-hopping in the Caribbean he met one Bill Duker. Another extraordinary event brought Ruperti’s to the forefront: Nicolas Maduro’s nephews got arrested in Haiti in November 2015, for trying to smuggle 800 hundreds kilos of cocaine into the U.S.

Ruperti, again “trying to help”, mentioned to new “yachting buddy” Duker that he was keen on hiring a lawyer that would take on the case. Duker’s answer was to introduce his associate, and also yacht enthusiast, Boies.

Boies would also be retained by Ruperti in the case of Joshua Holt, a U.S. missionary arrested on trumped charges in Venezuela.

The two cases mentioned were of little monetary value to Boies. More of a political play. That, however, changed when PDVSA came into the picture. Boies is currently ear-deep into a mega lawsuit pitting PDVSA against some of the world’s largest energy trading companies.

Boies allegedly set up PDVSA US Litigation Trust. There’s no paper trail behind formation of the trust. Boies chose two of the three trustees: Vincent Andrews and Edward P. Swyer.

As it turns, Vincent Andrews was sued (RICO and fraud) prior to that, and his lawyer was none other than Boies. Andrews was found guilty in a California court, but before paying damages he filed for bankruptcy. A lengthy case followed, one in which Boies was involved, and lost.

See the pattern here? Andrews is charged with RICO and fraud, refuses payment -through years of litigation, and the first thing Boies does when setting up his own shop is to use Andrews. Boies saw no conflict in registering a company, right after departing Cravath, with a fraudster. Duker was sent to jail for stealing money from the U.S. government. He did his time, came out, and pal Boies ensured he’d get by by sending lots of business his way. Boies saw no conflict, neither revealed until it was found, that his own children were partners in a Duker company retained by Boies’ clients.

Boies is blind to conflicts, his life long association with a convicted felon and fraudsters, or his servicing dictators, drug traffickers, and money launderers proves as much.

People familiar with proceedings say Nicolas Maduro is not happy with the arrangement with Boies and wants more than 34%. Neither is the new, all powerful CEO of PDVSA, Manuel Quevedo -who is doing deals with Trafigura (one of the main defendants), while that company is extending credit lines to PDVSA and duking it out in court against Boies!

And much less is Tareck el Aissami, Venezuela’s new Economy Tsar and OFAC-designated kingpin, whose long time associate Ysmel Serrano was described by Boies in particulars of claim as one of the bribed PDVSA officials.

Chavistas want to renegotiate terms, but Boies isn’t playing ball, arguing that matters pertaining the trust can only be decided by trustees, two of which he has under his thumb.

Boies is also in cahoots with Ruperti, since the trust’s inception of course. Ruperti sold this farce to Maduro & co. As case proceedings tick along, the very standing of the trust is being challenged. It remains to be proven, by Boies, whether the trust was set up in strict observance of Venezuelan legislation. Word on the street is, it wasn’t.

Witnesses, that Boies was expected to produce, keep cancelling as per direct orders of Nicolas Maduro according to case documents filed.

The identities of ultimate beneficiary owners have now been leaked, and Boies has seen his aura of infallibility take an absolute hammering. Brennan, Boies own investigator, has contradicted him on record. The main defendants in the case have not even been served, and the court may lack jurisdiction over them.

And then, to compound trouble, there’s the issue of a competing criminal probe, filed in Switzerland on behalf of PDVSA, by another law firm associated with Ruperti. As part of that proceeding, a server that allegedly contained all the evidence Boies was banking on to argue his case was sent to a Swiss prosecutor. Boies colleagues have admitted in court hearings that they “don’t have documents from after 2006 to today.”

The Swiss prosecutor may, or not, decide to allow Boies to get a copy of the server. More likely, the Swiss prosecutor may decide that it is in PDVSA’s best interest to share that information with the U.S. Department of Justice instead, which, again according to people familiar with the case, has taken an interest and has approached its Swiss counterpart.

Boies might be eyeing his 22% of a case that, by some estimates, exceeds $5 billion worth of claims. But then, he could also leverage his knowledge of this affair, and its parties, in unrelated future cases between actors involved. After all, this is the guy who hired Israel’s black ops firms to silence Harvey Weinstein victims. This is the guy defending Najib Razak.

This is a man that couldn’t see conflict in giving a plane ride to an opposing prosecutor. This is a man whose bullying tactics to protect fraudulent behaviour of a businesswoman he was associated with is the stuff of legend. Boies is a multimillionaire that sees no issue in putting himself at level of utterly destitute and famished Venezuelans living through a humanitarian crisis brought about by the very criminals he defends. 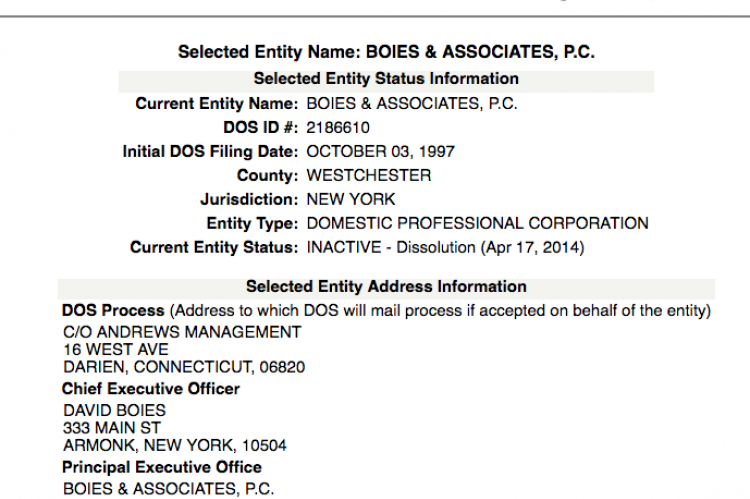