That Conoco lawsuit against PDVSA US Litigation Trust must have a lot of folks quite nervous. There are inaccuracies in particulars of claim, like the ultimate parent of Algamex in Isle of Man, or who exactly is behind the Trust. In any case, leaks have started, and one of the emails that hit my inbox this morning contains details of the Engagement Letter, between Boies Schiller Flexner LLP (BSF), and Nelson Martinez, acting as Venezuela's Minister of Energy on behalf of PDVSA.

To say that Venezuela got properly fucked (pls forgive use of expletive) would be an understatement. Martinez, enjoying life now in some dungeon in Venezuela, is MIA. That means, the arrangement whereby Martinez agreed to be the figurehead responsible for dealings with Boies & co is, erm, moot (?). Given that representative of one of two parties sits in jail and can't come to the phone, who is Boies dealing with now? Moreover, what of Boies imposed arrangement that non-PDVSA parties could not stand in, and engage in any way with Boies' law firm of Litigation Trust matters?

It doesn't end there, of course. In view of such insane, and totally illegal, arrangement according to Venezuelan legislation, how can Boies then offer Reinaldo Muñoz for deposition? Muñoz is not an employee of PDVSA, in fact he has absolutely nothing to do with PDVSA, or with Venezuela's Ministry of Energy, or with any entity remotely associated to energy / oil matters. Muñoz is Venezuela's Attorney General (Procurador). No wonder Boies is claiming State Doctrine: a cursory check on standing of Trust is certain to expose its utter illegality.

Then we have how proceeds are going to be divided. Boies is a good businessman, the yachts and lifestyles he and his partner in crime have are expensive... Not only Algamex may provide necessary funding to the Litigation Trust: BSF is also pitching in! So Martinez agreed that PDVSA would pay costs incurred by Boies & Algamex before gross returns of claims are divided.

Which brings me to division of proceeds: confirming earlier sources, Boies' law firm, Boies Schiller Flexner LLP, is to receive 22% of all proceeds. Boies' 22% share is to then be divided 65/35 with Meister Seelig & Fein LLP. Algamex, read Bill Duker, is to get another 22%, and the Brennan Group (John Brennan) is to get 22% as well. PDVSA is left with 34% of whatever is left after paying costs to Boies & Algamex, settling and agreeing on value of proceeds, and dividing the rest 66/34.

Sheer rackecteering this is. I asked Boies, whether he or any of the dodgy parties associated to him, paid bribes to obtain such a deal. For here's America most celebrated lawyer, getting a deal that doesn't make any commercial sense to PDVSA (easily the most corrupt energy company in the world), and we are to believe that he just got the deal, just like that, without greasing some hand somewhere? The involvement of Wilmer Ruperti makes all the sense in the world now.

Boies and his financial secretary got requests for comment. So did Alexander Pencu, of Meister Seelig & Fein. None have replied.

The interesting aspect of this, to me at least, is that Conoco Phillips's lawsuit is but an action against PDVSA US Litigation Trust's components: BSF, Algamex, Brennan Group, Meister Seelig & Fein LLP, Vincent Andrews, Edward Swyer (is that other Swyer there related?), and Nelson Martinez / PDVSA. PDVSA's 34% share isn't going to cover much, but still: popcorn time! 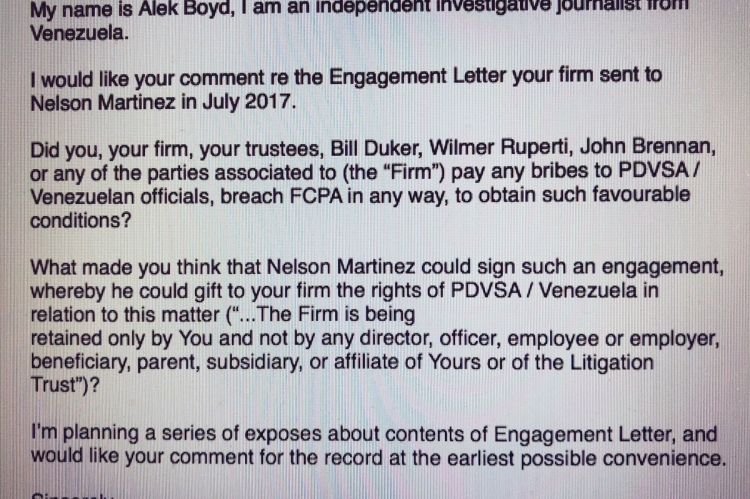