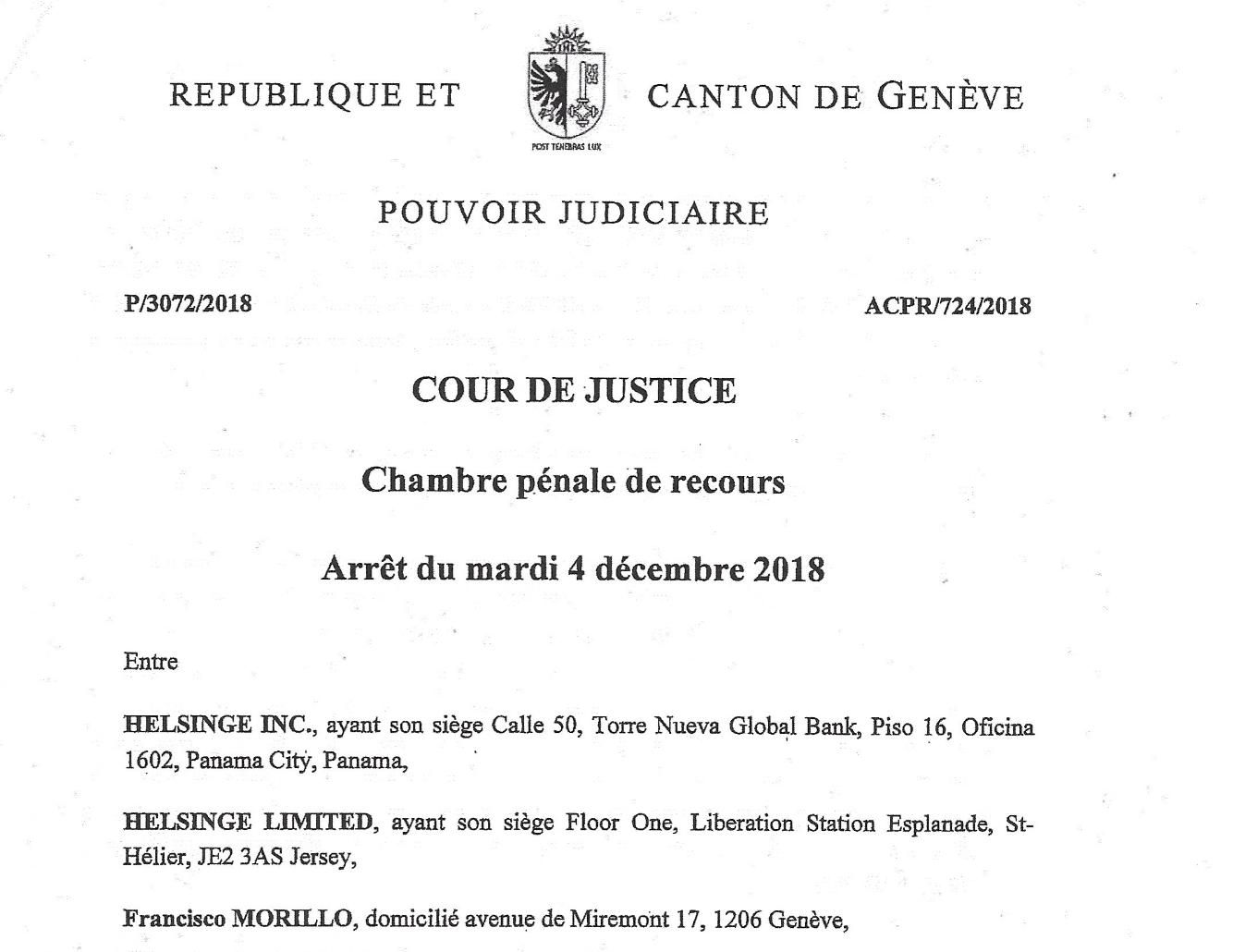 Further from news last week about a ruling for PDVSA in penal lawsuit brought against Helsinge, Francisco Morillo et al, sources familiar with the case in Venezuela have provided additional details. A Geneva court dismissed Helsinge's arguments challenging legitimacy of PDVSA, as an aggravated party in a conspiracy to defraud the Venezuelan energy giant. Helsinge's (idiotic) argument was, basically, a repetition of its (valid) line in a civil case brought in Florida by PDVSA US Litigation Trust. No one in Helsinge's camp seems to have realised the difference between PDVSA directly bringing a penal claim as an injured party, and PDVSA passing rights to claim to PDVSA US Litigation Trust, to act on its behalf on a civil matter. On that very basis, the judge dismissed Helsinge's challenge. This ruling has huge implications for Helsinge's Swiss co-conspirators, i.e. Glencore, Trafigura, Vitol, Lukoil, et al. 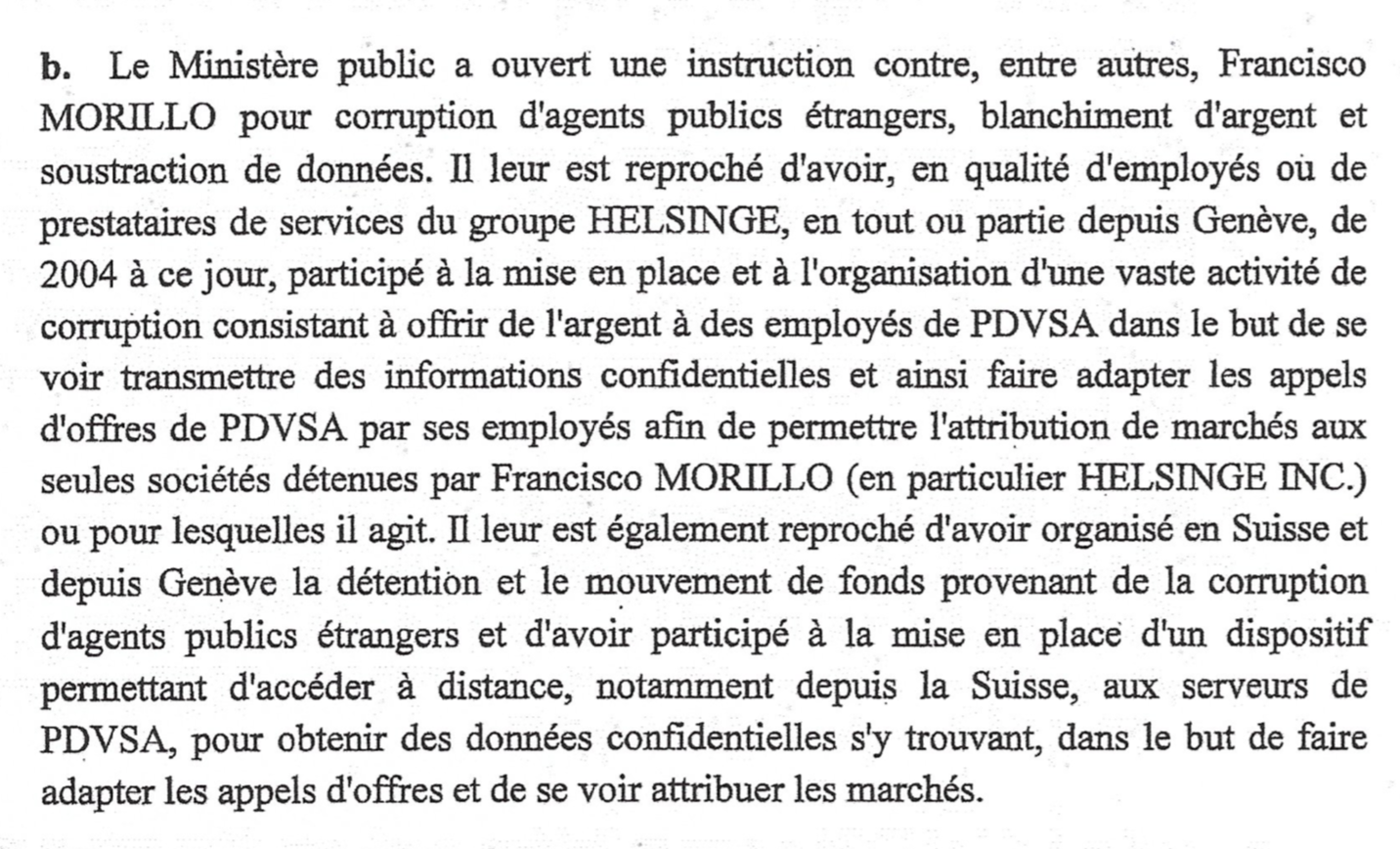 Helsinge's ran a conspiracy -beginning in 2004 according to the ruling- whereby it bribed PDVSA officials to gain real-time access to oil tenders' information, whether for itself, or to pass it along to the likes of Glencore, Trafigura, Vitol, Lukoil, etc. Bribe payments were organised from Switzerland / Geneva. With that information, Helsinge and its partners kept winning and winning bids. The ruling also alleges that members of the conspiracy could access PDVSA's oil tenders information in real time, from Switzerland.

Loss figures vary, though it is alleged it goes into the billions. While there's almost universal consensus on the scandalous percentage (66%) that PDVSA US Litigation Trust managed to extract from (jailed) Nelson Martinez, who had no legal right to be either forming a trust of the type or ceding PDVSA's legitimate rights to claim, no one can reasonably question the validity of PDVSA wanting to get back to Swiss energy trading houses that traded billions through utterly corrupt practices (standard operating procedure).

The ruling is going to cause more than one headache to Jeremy Weir, Ian Taylor, Vagit Alekperov, and specially to Ivan Glasenberg, considering the U.S. Department of Justice's July's subpoena to probe Glencore's operations in Venezuela. Once probing authorities start getting into the merits of the case, i.e. evidence contained in a Helsinge server, that's when the fun will start. For remember: Glencore, Trafigura and Vitol also stand accused of paying millions worth of bribes to Brazil's Petrobras, and yet another probe into the affair was launched last week.

Morillo, being the weakest link in this chain of corruption, is almost certainly going to be thrown to the wolves, just like what Trafigura did with its own Mariano Marcondes Ferraz. Venezuelan authorities, if serious at all about fighting corruption, should start its own investigation and arrest the implicated, most of whom are in Venezuela. Ditto U.S. DoJ.

Consulted authorities from Geneva's Penal Court of Appeal claimed ruling should be published around mid January. 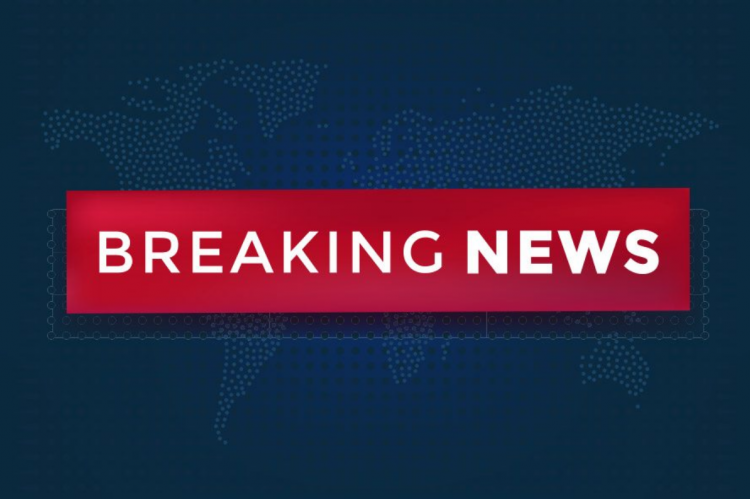