PLEASE READ UPDATE ADDED 03/04/2017 BELOW - It has become a custom. Unsupported information leaked to this site ends up being confirmed by official evidence. The latest puts to rest an extraordinary claim: that Derwick Oil & Gas was actually a silent partner of Russia's Gazprombank Latin America Ventures B.V. in its dealings with Petroleos de Venezuela (PDVSA).

A detailed explanation is in order. Derwick Associates is a Venezuelan company that bribed its way to getting 12 procurement contracts between 2009-2010. Due to the fact that contracts granted by PDVSA and other Venezuelan public institutions were executed by a Missouri-based subcontractor (Pro Energy Services), U.S. Attorney of the Southern District of New York launched a probe into the affair, confirmed by Swiss authorities in late March.

Pro Energy Services invoiced Derwick Associates about $1.3 billion, but Derwick Associates charged an estimated $2.25 billion in total to PDVSA and other Venezuelan institutions. The resulting billion had to be laundered. In February 2011, Derwick Oil & Gas was registered in Barbados.

But it would be in September 2013 that the first leak about Derwick Oil & Gas activities arrived. It related to one of Derwick Oil & Gas directors, Francisco Convit. What was claimed by informants couldn't be confirmed. Then in June 2014, a source in Morgan Stanley revealed that a former U.S. Ambassador to the Dominican Republic was offering oil and gas (as much as 75,000 BPD) from Venezuela, on behalf of Derwick. At around the same time, another source revealed that Derwick's representatives had visited Brazil's BTG Pactual top managers, flogging oil concessions, as in partnerships in mixed enterprises, with PDVSA. None of it could be confirmed.

In the meanwhile, Derwick acquired nearly 20% stake of Canada's Pacific Exploration & Production, becoming one of its largest shareholders. Alejandro Betancourt, CEO of Derwick Associates and director of Derwick Oil & Gas, now sits in Pacific board, as an "independent director".

Betancourt's Pacific bio is one lie after the other. Derwick Associates -in its power plant related activities- does not operate anywhere but in Venezuela, where all the work commissioned was carried out by Pro Energy Services. It would be impossible for Betancourt to support -with verifiable evidence- his alleged "significant experience in the oil & gas business in projects ranging from Europe to Africa". Neither Pacific Energy, nor Canadian financial authorities, complied with minimum regulatory checks to determine legitimacy of Betancourt's funds.

In the context of the struggle between Pacific Energy's former management and the -undesired- arrival of Betancourt & co, a document was leaked to this site, showing Derwick's CFO (Orlando Alvarado) association with a representative of Gazprombank (Christophe Gerard) in PetroZamora, a joint PDVSA-Gazprombank enterprise. The document above, along with other circumstantial evidence, prompted further research for information related to PetroZamora's formation.

And yet a further twist: right after Bloomberg broke the "Swiss Banks Land in Middle of Money-Laundering Probe -- Again" news related to Derwick and PDVSA, a message arrived in my inbox: "do you know that derwick is a silent shareholder in gazprombank latin america ventures b.v.?"

Convit was director since September 2012 until 4 April 2016, when Alvarado seems to have taken over the role. While Ivanov and Gerard have been / are directors / holders of class A shares, Convit and Alvarado hold class B shares.

PDVSA's CEO meets Gazprombank's Boris Ivanov in Caracas, in November 2013 to sign loan agreement. No mention of Derwick, or any of its executives, was / has ever been made.

After consultation with an energy expert, more evidence was found, in Venezuelan Official Gazette.

Congress and first Presidential Decree established that 60% of shares would be allocated to Corporación Venezolana de Petróleo S.A. (CVP) and 40% would belong to Gazprombank Latin America Ventures B.V., while the second Presidential Decree granted a 25-year production period in designated area.

The new venture would produce oil in a 697.96 km2 area in Zulia estate, described as Bachaquero Tierra and Lagunillas Tierra.

On 28 April 2015, Venezuela's Congress approved an expansion of oil producing area allocated to PetroZamora. Additional rights for Bachaquero Lago, Bloque VII Ceuta, Bloque III Bachaquero, and Bloque III Centro were granted, increasing the concession's area by 1,157.07 km2. This new act of Congress was followed on 2 June 2015 by a Presidential reform to some articles of previous Decree no. 8,905.

There is no mention of Derwick Oil & Gas, or of Orlando Alvarado, anywhere. But then, the information below gave the game away. This is the same Francisco Convit that acts as a director of both Derwick Associates and Derwick Oil & Gas, as seen above. So Derwick has in fact been a silent partner in Gazprombank Latin America Ventures B.V. since first negotiations with PDVSA. Worth noting that Convit / Alvarado are described as class B shareholders in PetroZamora, as they are in Gazprombank Latin America Ventures B.V.

So here's a question: did Hugo Chavez, Diosdado Cabello, Rafael Ramirez, and Nicolas Maduro know, as officials authorizing creation of joint venture, that Derwick's execs were partners? Given the amount of coverage that Venezuela's power plant fiasco has gotten, its corruption and associated international probes, how could chavista officials allow Derwick to carry on doing deals with the State?

Reuters informed in July 2013 that Gazprombank -no mention to the Latin America Ventures B.V. branch- would give a one billion USD ($1bn) loan to PDVSA for the creation of PetroZamora. PDVSA's CEO signed the loan deal with Gazprombank's Ivanov, as seen in video above. Sources familiar with Derwick's activities claim that it placed up to to $300 million of its own funds into that loan, to be laundered through PetroZamora. PetroZamora should to be producing over 70,000 BPD now. Employees of Derwick, like former U.S. Ambassador Hans Hertell, have offered PetroZamora's oil and gas in the open market. Little wonder how Convit can shout in excitement after purchasing a $2 million horse for his racing stable...

A Panamanian shell companies structure, including Mossack Fonseca-registered Kayland Holdings, and Beefield International are alleged to have been used by Derwick Oil & Gas to wire funds to Gazprombank Latin America Ventures B.V. via accounts in BTG Pactual-owned BSI, Banca Credinvest, Julius Baer, HSBC and the Royal Bank of Canada.

Gazprombank Latin America Ventures B.V. and Derwick Oil & Gas entered into a loan agreement in April 2013, whereby Derwick committed to fund Gazprombank's loan to PDVSA for PetroZamora's purposes, said people familiar with the deal. An example was provided to this site: a transaction that took place in October 2014, when Christophe Gerard sends communication to Convit informing about payment of some $12 million as part of "loan agreement" repayments.

Requests for comment sent to Gerard / Gazprombank have gone unanswered. A Venezuelan shareholder of Banca Credinvest (Antonio Pardo Andretta) denied any association between his bank and Derwick's people. Banca Credinvest, in particular, is said to be at the core of transactions between Derwick and Gazprombank Lantin America Ventures B.V.

Gazprom and Gazprombank were included by the U.S. Treasury in its list of sanctioned Russian entities due to Ukraine's invasion. U.S. Attorney of the Southern District of New York and Swiss authorities are investigating PDVSA and its corrupt deals with Derwick in particular. Ivanov and Gerard have direct links to Gazprom and Gazprombank.

Alejandro Betancourt -Derwick's main boss- has been claiming for years now that he is associated with Gazprom.

The final question is: are Gazprom staff (Ivanov and Gerard) facilitating Derwick's money laundering and using PDVSA for that purpose?

The letter is signed by Alejandro Betancourt. Other documents show wires made from BANSTEAD ASSETS SA (Panamanian corp. controlled by Francisco Convit) account at Compagnie Bancaire Helvetique to Gazprombank Latin America: on 25 April 2013 Convit wired US$ 9.5 million, while Betanncourt wired the US$ 12.9 million mentioned above, from CALANDRA BUSINESS SA, another Panamanian co under his control.

In separate documents Betancourt's banker claims his client has a "Personal net worth evaluation (in USD)" of US$ 600 million; in Convit's case personal fortune is estimated at US$ 200 million. This is truly interesting, for by September 2013 the only known deal Betancourt and Convit had ever done was to get 12 no-bid contracts for Derwick Associates. In separate document, produced by Derwick Associates' CFO Orlando Alvarado also in September 2013- Betancourt claims that Derwick Associates is "a company with sales over US 1.7 billion over the last three years in the EPC energy business...", and goes on to say that he has "Originated and executed commodity transactions for Derwick clients for sales over US$ 250 million."

The question that has to follow is: what kind of profit margins are Betancourt and Convit extracting from Derwick, whereby sales of $1.95 billion turn in little over three years into personal fortunes amounting to $800 million? And, where do they pay taxes on such income? Sources knowledgeable of tax affairs in Venezuela have told us that Alvarado, for instance, has paid just BsF 228,183.68 in taxes between 2011 and 2017, that's just over $1,100.

Other documents put to rest the manner in which Derwick Associates was contracted in the first place: contratación directa, read no-bid procurement contracts handed over by father of school chums (Javier Alvarado Ochoa), and other utterly corrupt chavistas, like Alberto Joanes Urdaneta Urdaneta, and Luis Carlos de León. 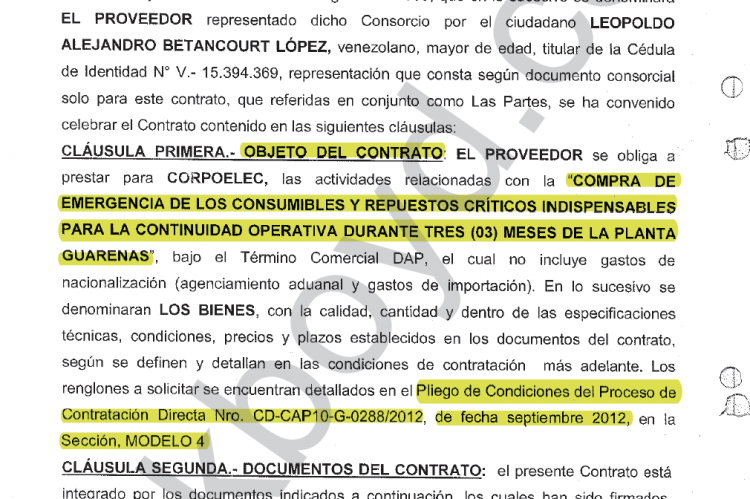