In PDVSA’s corruption leagues focus on Francisco Convit, Matthias Krull is a non-story

Focusing on Matthias Krull -the German-Venezuelan "banker" used by Francisco Convit, Raul Gorrin, Nicolas Maduro et al to launder $1.2 billion worth of PDVSA funds- is like pretending that El Chapo's driver was the head of the Cartel. When it comes to PDVSA, most roads tend to lead to Rafael Ramirez, who was the architect in chief of the world's largest looting of assets and money that anyone has seen. Krull is a bagman, an enabler getting a commission, a nobody, in yet another corruption scandal involving PDVSA. As a corruption scholar focused on Venezuela I can tell: Krull isn't the story here. Let's talk about Convit instead.

Before 2009, nobody beyond some middle class families in a Caracas neighbourhood knew of Francisco Convit Guruceaga. Then, Hugo Chavez decreed a power emergency: blackouts and outages were to be alleviated by handing no-bid, procurement contracts to a completely unknown company called Derwick Associates. Derwick Associates was, at that time, a Panamanian shell company. It did not have a track record of business in the procurement of power plants anywhere on earth. Still, the Minister tasked with "fixing the problem", Javier Alvarado Ochoa (wanted, on the run and hidden in Austria as per sources), had a son that happened to have gone to school with Francisco Convit's friends: Pedro Trebbau and Alejandro Betancourt.

That, and nothing else, got Derwick Associates its first contracts. Pure nepotism. Once that happened the Derwick boys got creative. Convit, Trebbau and Betancourt milked not only their friendship with Alvarado's son, but Alvarado's very own network, which included one Nervis Villalobos (jailed in Spain, pending extradition to U.S.). Villalobos was one of Rafael Ramirez favourite operatives. Derwick negotiated its corrupt deals with PDVSA -with Ramirez- through Villalobos. Derwick, in fact, contracted Villalobos as a "consultant".

The $4 billion plus graft scheme preceded that of Krull and Convit by about two years. Like the Krull and Convit one, it was negotiated by an associate of Derwick: Villalobos. Like the Krull and Convit one, it was pitched to Ramirez, who approved it. Like the Krull and Convit one, it involved Alejandro Betancourt, CEO of Derwick Associates and partner in crime of Convit and Trebbau (among others). But it also involved executives from El Nacional newspaper. And brothers Luis and Ignacio Oberto. And associates of Danilo Diazgranados. And bankers, one in particular, Frenchman Charles Henry de Beaumont from Switzerland's Compagnie Bancaire Helvetique, very well versed, like Krull, in all aspects of money laundering. Beaumont was Danilo Diazgranados' errand boy. Beaumont was also Convit and Betancourt personal banker. In fact, this site has published documents -authored by Beaumont- where he argues that Convit had a net worth of $200 million while Betancourt was worth $600 million... in 2013! This is right after the power plants gig, before oil partnerships with Gazprombank and money laundering schemes with PDVSA kicked in.

A meeting in Miami with a source familiar with Beaumont's activities left me in awe at the level of detail that the U.S. Department of Justice (DoJ) has with regards to that specific $4 billion plus deal. That source provided DoJ with copies of Beaumont's laptops, which contain huge amounts of incriminating evidence, not only on Convit and Betancourt, but on Luis Oberto, Raul Gorrin, Danilo Diazgranados, Swiss, Austrian, Panamanian, Venezuelan and Caribbean banks... That source has explained, in excruciating detail, the operations of Convit et al. That scheme, allegedly pending Grand Jury preparations, was meant to be in the hands of (now retired) Dick Gregory, who was allegedly coordinating a joint Houston-Florida-New York action against the culprits.

But Convit's business did not end with power plants and parallel foreign exchange deals. Convit and Betancourt are also partners of PDVSA, and of Gazprombank, in an oil-producing venture called Petrozamora, first revealed in this site in 2016. Convit is an associate of sanctioned Russian entities. But Convit's and Betancourt's oil deals did not end with the sacking of now disgraced, wanted and on the run Rafael Ramirez. No. Another oil concession called Petrosur was granted to them by Nicolas Maduro's top justice chief, Maikel Moreno, who, among other things, provides Raul Gorrin and his Derwick friends with legal protection in return for nice fees. And Gorrin, an associate of Convit's in Krull's non-scandal, was also involved with Alejandro Andrade, former Treasury Chief, thanks to whom nearly £3 billion (Sterling that is) worth of Treasury funds were assigned to Gorrin for -yet- a previous similar parallel FX market "deal". And in that, other, nearly £3 billion scheme, guess who was the banker of choice? Charles Henry de Beaumont, of Compagnie Bancaire Helvetique.

Is anybody keeping count? It would be foolish to claim that Convit, Betancourt, Gorrin, the Obertos and Ramirez worked alone. There are other facilitators that belong to the crime syndicate: Danilo Diazgranados, Armando "Coco" Capriles, David Osio, Victor Vargas, Francisco D'Agostino, Moris Beracha, Juan Carlos Escotet... The certain thing is that Convit and Betancourt seem to be very close, if not outright involved, in many of the largest corruption scandals of the last few years in Venezuela. They're in bed with the Russians too. And with the most corrupt elites in Spain and in the U.S. Yet, they are free. Convit is in Venezuela, where Maikel Moreno and Nicolas Maduro will guarantee nothing will ever happen to him. And Betancourt? He keeps travelling the world with his associates, totally unencumbered and pretending to be a businessman, in his N717FM jet.

Venezuela has become a regional headache. The Trump administration is meant to be weighing all cards to deal with the mess. A simple one would be to issue international arrest warrants on all these folks, who without a doubt, as Betancourt's case seems to be, will sell even their mother if that means keeping the loot and freedom. Mountains of evidence in the FBI, SEC, DoJ, DEA, OFAC, HSI, etc. hands must be used, and acted upon, without further bureaucratic delay. 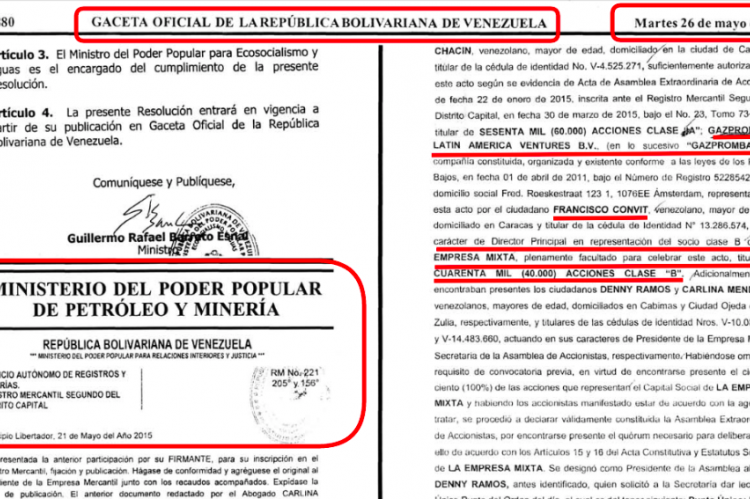