Let us get into specifics: on 5th May 2016, Andorran Prosecutor Canòlic Mingorance sent a Letter Rogatory to Mireille Venet, Assistant to National Financial Prosecutor's Office in Paris. Mingorance requested Venet to launch a probe into Rafael Ramirez, Luis Mariano Rodriguez Cabello, Diego Salazar, Nervis Villalobos, Javier Alvarado, et al for their involvement in laundering approximate €2 billion worth of PDVSA funds through Banca Privada d'Andorra (BPA). According to Mingorance's Letter, the case in Andorra actually started when Andorra's Financial Intelligence Unit (UIFAND) got information from its French counterpart TRACFIN, alerting about a $99,980 tip that had been wired to a hotel employee by a Panamanian shell (Highland Assets Corp) controlled by Salazar. TRACFIN reports obtained by this site expose, for the first time, the name of tip receiver: Eric Beaumard. 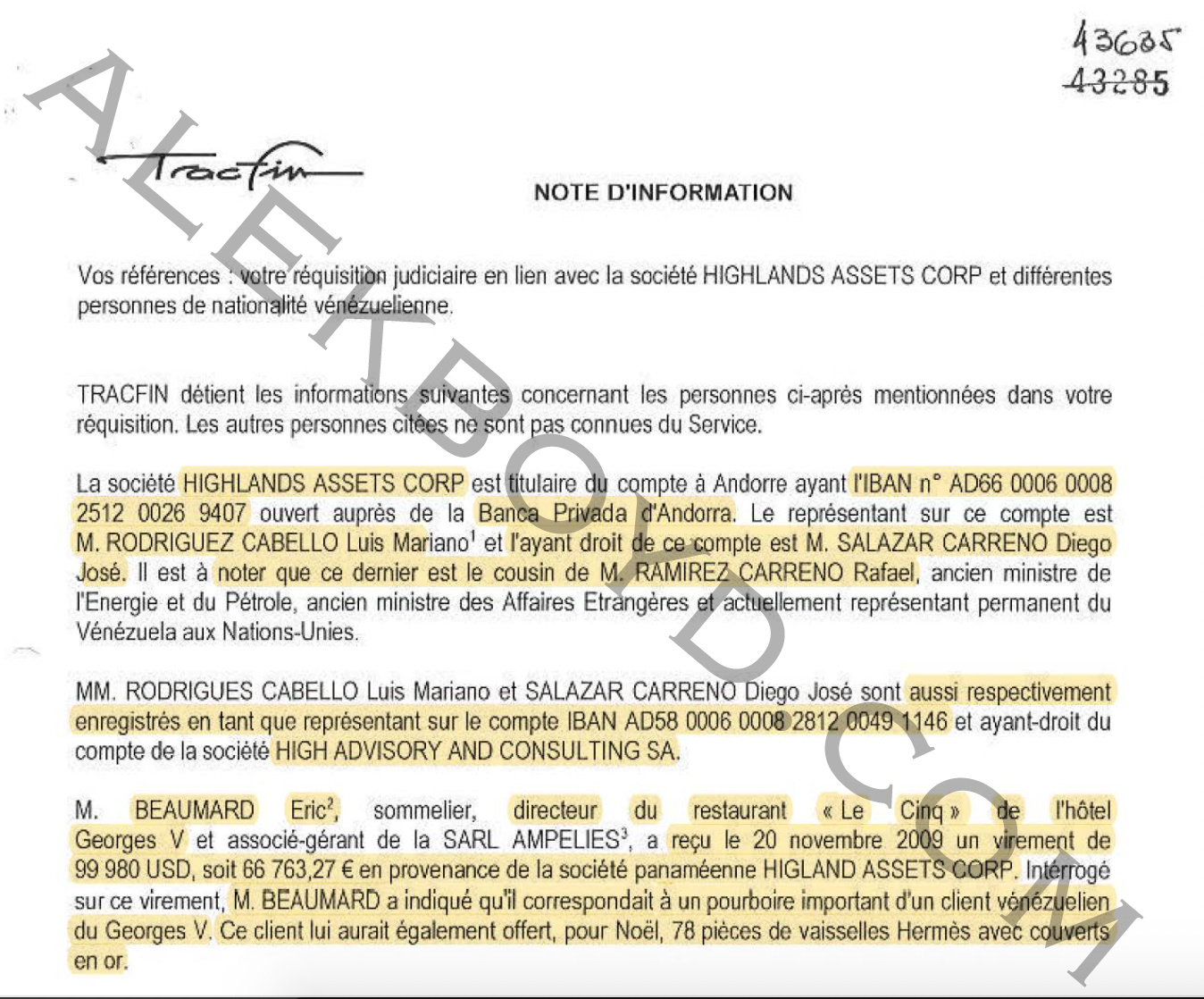 Salazar's Highland Assets Corp wired from BPA the $99,980 tip to Ampelies, a company under Beaumard's control, on 20 Bovember 2009. The ensuing scandal was of such magnitude that U.S. Treasury's Financial Crimes Enforcement Network (FinCEN) ended up naming Banca Privada d'Andorra in March 2015 as a "Foreign Financial Institution of Primary Money Laundering Concern".

Monsieur Beaumard, however, continued selling fine wine to Salazar, even after Andorran authorities and FinCEN had exposed his involvement in massive money laundering at BPA. TRACFIN established that Ampelies (Beaumard's shell) got two payments into its HSBC account, 12 April and 6 May 2016 respectively, for €61,320 and €99,300. This time, Salazar's funds originated from account 44149 00001 00001212400 at Banque d'Escompte, which trades as Banque Wormser Frères. TRACFIN's reports added that Salazar opened that account, on his name, 24 November 2015. That is eight months after FinCEN's enforcement action the folk at Banque d'Escompte proceeded to open an account for Salazar.

Beaumard, a recipient of "best sommelier in France and in Europe" in the past, is the restaurant director and sommelier of Hotel George V in Paris (Four Seasons). He describes himself as "a cheerful and frank go-getter unafraid to stick to his principles: finding wines that speak the truth." The chap must be cheerful indeed, to have prompted Salazar to give him a $99,980 tip as well as an offer of a 78-piece gold tableware set by Hermès. As per his proclaimed character attributes, Mr "go-getter" is "unafraid" all right: he just continued servicing Salazar.

But l'affaire Salazar, as defined in TRACFIN's reports, wasn’t just tips, wine and clothing purchases. Mingorance had also found about a €40 million transfer that Salazar had organised from his Swiss accounts (Hottinger & Cie, Credit Suisse), with the purpose of real estate acquisition in France. This is where law firm FTPA and Jean-François de Clermont-Tonnerre came to help.

In August 2016, Emmanuel Chirat with the Office of Serious Economic and Financial Crime (Parquet National Financier - PNF), sent communication to TRACFIN's Director requesting all information in the following respect:

TRACFIN identified two companies, linked to Salazar, in France: Inverdt Consulting and Cliona Holding. Both shells had bank accounts (two each) at Banque d'Escompte. Cliona was described by TRACFIN as a Luxembourg’s company dedicated to real estate acquisitions whose registered adderess in Paris is 17/19 Av. Montaigne, one of two buildings that FTPA & Clermont-Tonnerre helped to purchase on Salazar's behalf.

This site's sources have consistently reported that Ramirez regularly visits an olive growth in the outskirts of Rome (BoMa). Further delving into BPA's case files we found that Nervis Villalobos had wired €2,5 million in March 2012 from BPA to Banca Mediolanum S.p.A. (Patrizia Longarini IBAN IT05BOJ062J41200000012J5JS8), to purchase an apartment in Via dei Monti Parioli 38 in Rome. Furthermore, refurbishing invoices related to the property were also filed with BPA's money launderers. Despite being registered in a different residential address in Rome, Ramirez lives in Villalobo's property according to Italian records.

While Ramirez's name does not appear directly linked to any companies, properties or bank accounts in France, TRACFIN's findings in relation to Salazar's Cliona point in the right direction.