Puzzling turn of events regarding Wilmer Ruperti: after years of legal battles against the Russians in different jurisdictions, freezing orders, settlements, etc., Ruperti is returning the favour, and suing Novoship. In the Commercial Court of the High Court of Justice (case no CL-2018-000824), Maroil and Sea Pioneer, two companies under Ruperti's control, are suing Novoship and a bunch of companies associated to it. Particulars of claim include damages of "between USD 53.5 million and USD 90.8 million for breach of an agreement... an indemnity in respect of USD 22 million..." and associated "interest on all sums". A web of deceipt and rampant corruption follows...

This tale started when Novoship basically caught Ruperti making false representations in shipping contracts. Through corrupt arrangements approved by Rafael Ramirez, Ruperti was given the task to sort out PDVSA's shipping needs during the oil strike of 2002-03. With that in hand, Ruperti then found equally corrupt counterparties at Novoship, which readily entered into shipping contracts with a company controlled by Ruperti, instead of directly with PDVSA. Ruperti registered shells that had PDVSA's name on it. He replicated the formula with Novoship.

Ruperti would then subcontract another of his companies, which would in turn be contracted at a substantial profit by PDVSA. Ruperti was many middlemen roled into one, and "made" an absolute pile. The Russians eventually found out, and sued Ruperti, who lost in all jurisdictions where claims against him had been brought (claim 1).

Having antagonised the Russians, Ruperti then established a working relationship with the Sargeant family. Fresh shipping contracts were entered into between companies controlled by the Sargeants and PDVSA. The Sargeants then brought claims for breach against PDVSA, and designated Ruperti as negotiator-in-chief (claim 2). But then, the Sargeants must have realised that Ruperti was, yet again, lying about status and settlement negotiations with PDVSA, and sued (claim 3).

The fascinating thing about all this, is the information being ventilated in the different lawsuits.

We know now that it was Rafael Ramirez who hand picked and commissioned Ruperti, making him an overnight Venezuelan Fredriksen.

In claim 2, Ruperti argued with PDVSA that he had suffered losses of some $580 million. We found out about how PDVSA's Jesus Enrique Luongo (cousin of Ramirez), agreed to settle and paid some $230 million into: a) Ruperti controlled shells and b) Intercontinental View Inc.

Funds destined to settle Ruperti's claim with Novoship were deposited in an escrow account controlled by Yves Klein of Monfrini & Crettol lawfirm in Switzerland, acting as counsel for Novoship. Where else have we seen Crettol in the context of Venezuela? As secretary in a shell belonging to Baldo Sanso, brother in law and trusted lieutenant of Rafael Ramirez.

Why is Prada Gomez of note? A separate corruption scandal was exposed in the Spanish press recently, involving former Spain's Ambassador to Venezuela Raul Morodo and his son Alejo. Prada Gomez is among the arrested in connection to further PDVSA corruption.

In Ruperti's saga, there's also a mention of Latin American Petroleum Inc. Again, a seemingly non descript shell that happens to belong to Danilo Diazgranados, involved in countless corruption schemes in Venezuela. Good thing about keeping track of all these thugs is the ability to connect the dots, and so from separate deals involving also PDVSA and Ramirez, we learned how Diazgranados sent instructions to his Compagnie Bancaire Helvetique (CBH) banker Charles Henry de Beaumont, about confirmation discharge of his two accounts at that bank: Craft Financial S.A. (acc no 20686) and Latin American Petroleum Inc. (acc no 21371).

Other documents pertaining Diazgranados transactions at CBH account for yet another scheme, this time at FONDEN, whereby de Beaumont informs CBH that Diazgranados' Craft Financial S.A. has been "picked" by FONDEN to conduct £1.2 billion worth of operations in UK Gilts. Going back to Ruperti's latest lawsuit against Novoship, we learn that Novoship has dragged Burford Capital UK and Daniel James Hall into it. The reason seems to be that Hall -retained by Novoship to investigate Ruperti- exchanged information related to Ruperti that was part of a settlement with Novoship. The trade happened, as alleged in filed documents, with Daniel Sargeant, who was also suing Ruperti (claim 3). Daniel Sargeant, who  had a separate family dispute with Harry Sargeant, provided Hall with "salacious information" about Harry Sargeant, who Hall was also investigating in yet a separate claim. In a recent filing, Novoship argued that Hall and Burford made "fraudulent representations", and described Hall's use of Ruperti information obtained in the course of his activities for Novoship as a "breach of confidence and unlawful and would or might constitute a breach of the Defendants’ duties owed to the Claimants." Ouch. Novoship seems to be passing the buck to Burford and Hall in case Ruperti's claim has any legs.

Novoship's claims ring hollow somewhat, considering that, presumably, it must have entered into some kind of settlement with Ruperti in claim 1, which included a Mr Yuri Nikitin. Novoship parent company Sovcomflot's UK's senior manager Lord Fairfax was, as recently as late 2018, exploring ways for the UK government to apply Unexplained Wealth Orders to Nikitin, who lives in the UK despite having been sentenced to jail -in absentia ?- in his native Russia.

It appears that Ruperti used PDVSA money to settle with both Novoship and the Sargeants, and is now seeking to get back at them with his latest antics. Ruperti, let's not forget, is also in the thick of PDVSA US Litigation Trust scheme against Glencore, Trafigura, Vitol, Lukoil et al, through connections to David Boies and Guerric Canonica. One thing is evident, man's totally unencumbered about size, power and reach of his legal enemies. 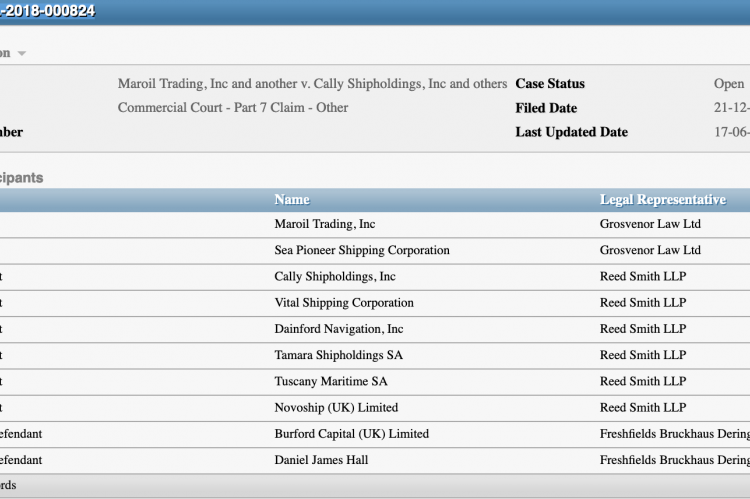