Sources in Venezuela report that PDVSA has entered into a service agreement with an American company, allegedly controlled by Harry Sargeant. While no formal announcement has been made, chavista source Aporrea informed on Thursday that PDVSA had penned 14 new deals to ramp up production by 1.025 MBD in 14 different fields, as previously announced by this site back in August. Aporrea added that Harry Sargeant, described as an "influential businessman and friend of Donald Trump", got a better deal: a 25-year service agreement with PDVSA, whereby production costs will be shared on a 50.1% - 49.9% basis. Chavista group "PLATAFORMA CIUDADANA EN DEFENSA DE LA CONSTITUCIÓN" is decrying Nicolas Maduro's decision to grant PDVSA's CEO Manuel Quevedo extraordinary powers to enter into such deals.

This site has seen some documents related to the service agreement referred above. The service agreement was initially signed by Manuel Quevedo -on behalf of PDVSA Petróleo S.A. (PPSA)- on 9 November, followed by an addendum on 15 November. An associated offtake deal was signed on 21 December by Jose Rojas Reyes, PPSA's Commerce and Supply VP.

The offtake refers to crude production from Rosa Mediano and Tia Juana fields. EREPLA undertakes to increase production, and market output in cargoes between 240,000 and 1,000,000 barrels. The offtake agreement will have the same duration of the service agreement: 25 years, renewable for another 15 years.

Production costs will be offset from crude value at wellhead and subsequent marketing of such by EREPLA.

Any breach by PPSA to service agreement and offtake agreement terms, with respect to deliverables, obligations, corruption and bribes, subjects PPSA to further U.S. sanctions and OFAC's licenses / licensees' conditions, under addendum signed 15 November by Quevedo. None of the parties can renounce conditions imposed by U.S. sanctions and OFAC. Without OFAC's express authorisation, and PPSA's acceptance, EREPLA cannot cede / transfer any of its contractual obligations / rights.

The fact that such clauses were written into the contract shows how dire the situation at PDVSA is. While chavistas take such a clause as treason, reality is that none of the other 14 contractors mentioned would have submitted to the kind of scrutiny the U.S. Government and Treasury imposes on licensees doing business with sanctioned parties. Some of them in fact (Venezolana de Enfriadores C.A. - VENENCA below), are controlled by OFAC-designated kingpins like Samark Lopez. Can anyone imagine Lopez agreeing to be subject to U.S. sanctions and jurisdiction in his corrupt deals with Tareck el Aisami and PDVSA?

A 60-40 percent model was applied to all previous joint ventures between Chinese, Russian, Cuban, Brazilian, Spanish and American companies with PDVSA. This site is particularly keen on understanding: 1) how did Sargeant manage to get PPSA to surrender to OFAC's close monitoring and observation; and 2) just how did he manage to get PDVSA to lower its participation in the service agreement to 50.1%. For that is a clear break from previous model, whereby PDVSA's partners did all the heavy lifting and investment -as EREPLA agreed to- for a 40% share.

Requests for comment have been put to Sargeant, replies will be posted in this site if and when they arrive.

Another very interesting clause, establishes that buyer, i.e. EREPLA, undertakes to destine offtake crude to U.S., Europe and Asia, and China "but only by mutual agreement." What this means is that U.S. Treasury is going to have detailed information, at the very least, on this bit of PDVSA's oil exports. Even if EREPLA were to agree to PDVSA's requests to send shipments to China, the U.S. government will know how much, when and where PDVSA gets paid for such deliveries.

It appears that systemic corruption in PDVSA just got that bit more difficult. Once full details of this new partnership are in the public domain, parties willing to invest in Venezuela will surely demand similar conditions. If U.S. Treasury starts monitoring operations of American businesses / businessmen in Venezuela that will bring more transparency. For now, that's a good thing. 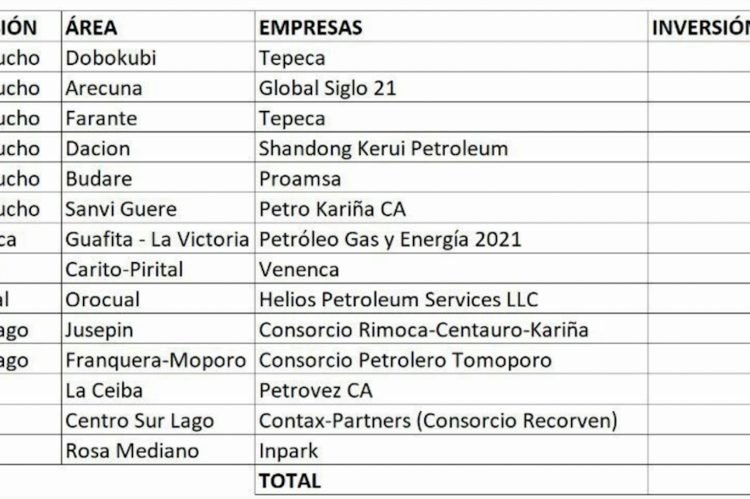