The UK's National Health Service's (NHS) website defines Psychosis as "a mental health problem that causes people to perceive or interpret things differently from those around them. This might involve hallucinations or delusions." Then, on the topic of delusions, the NHS claims "delusion is where a person has an unshakeable belief in something untrue. A person with persecutory delusions may believe an individual or organisation is making plans to hurt or kill them." Hearing what Boligarchs say, when confronted with evidence that demonstrate their utter corruption, suggests a common psychotic disorder (delusional disorder) shared among members of that class. Francisco D'Agostino is the latest exhibit.

A source informed this site that D'Agostino ordered raids in Caracas, back in 2013, against people thought by Derwick Associates to be our informants. Request for comment were put to D'Agostino, who came back with almost immediate denials. That was, of course, to be expected. But then D'Agostino went on to say: "I've got nothing to do with Derwick and you know it."

The reply to that was that, precisely because his partnership with Alejandro Betancourt was known to us, request for comment were sent. D'Agostino then exhibited what can only be described as a form of delusional disorder, i.e. his perception of reality is completely distorted.

D'Agostino was included in a lawsuit against Derwick Associates because he tried, unsuccessfully, to silence a critic of Derwick Associates corrupt business practices. In fact, there is a recording somewhere in which D'Agostino can be heard saying that paying "consulting fees" -thugs' term for bribes- was a matter of standard practice, in order to get procurement contracts in Venezuela. D'Agostino's admission was made in the context of a conversation -about Derwick Associates- with human rights advocate Thor Halvorssen.

And to be clear, D'Agostino would know a thing or two about corruption in Venezuela, as his father (Franco D'Agostino) was one of the most corrupt contractors in the pre-Chavez era. D'Agostino Jr. grew up around corruption. He married Victor Vargas' daughter and worked for Vargas. His brother in law is Henry Ramos Allup. His partners are Oswaldo Cisneros and Alessandro Bazzoni. He's mates with Luis Oberto, I mean the guy has an unshakeable, un-washable stench, he epitomises corruption.

A while ago this site found evidence -in Luxembourg's register of companies- that identifies D'Agostino as a partner of Alejandro Betancourt (Derwick Associates CEO) in a shell called BDK Financial Group.

When that evidence was put to D'Agostino in another messsage, his reply was "as of today I have no partnerships with Mr. Betancourt." As of today... right. D'Agostino went on to recommend this site improves the quality of its work, and also to be "more serious" in order to avoid discredit.

D'Agostino is, of course, not alone. His partner Alejandro Betancourt maintains an equally distorted belief of absolute innocence, despite mounting evidence to the contrary. Wilmer Ruperti, known for corrupt practices, says everything he's done -business related- is due to his "unmeasurable love for Venezuela". Raul Gorrin, currently flavour-of-the-month Boligarch, also protests any suggestion of corruption as origin of his sudden, and quite unexplainable, wealth.

Miguel Angel Capriles Lopez, Victor Vargas, Juan Carlos Escotet, Rafael Ramirez, Javier Alvarado, Luis Oberto, Francisco Convit, Alex Saab, Majed Khalil, Pedro Trebbau, Orlando Alvarado... every single one of them suffers the same psychotic behaviour. Exposing their wrongdoing, which this site does with gusto, is, quoting the NHS, nothing but a plan to "hurt" them, reality hurts them, official documents hurt them. They are all delusional, though fortunately the cure is being administered in increasing dosage by justice systems in different jurisdictions. 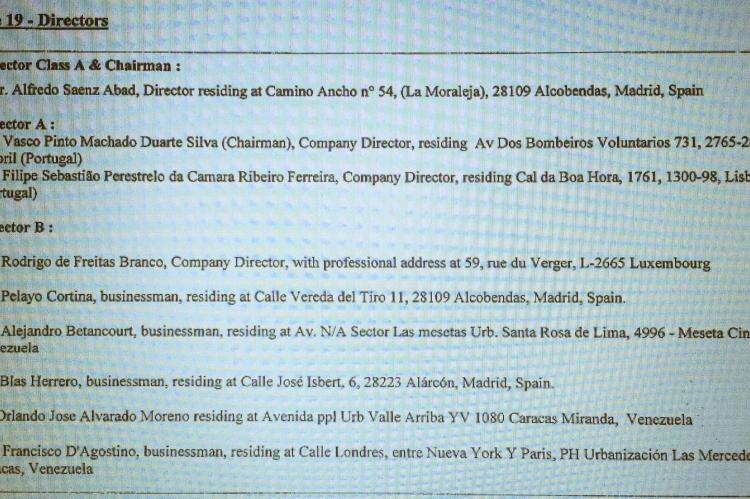