In the latest exhibit of "news" related to Venezuela, Bloomberg took a page out of Reuters' plagiarism book and published a report about Libre Abordo, Schlager Group, Grupo JOMADI and PDVSA.

You couldn’t even bring yourselves to acknowledge @reuters, which plagiarised same post before you:https://t.co/QYy48Rqcpi https://t.co/iuXybw3GdP

Plagiarism is theft of intellectual work. When it comes to reporting Venezuela's rampant corruption, no news organisation, anywhere, can begin to measure up with the volume of work published by us since late 2002. We have been steadfast and focused on that one topic ever since. News cycles, clickbait, editorial constrainst and legal threats have never been considerations interfering with our work.

Some people say we should feel proud, honoured even, that such prestigious news organisations basically copy our work and present it as theirs. Obviously those who claim that have no idea the effort and time it takes to produce original, unique, ground breaking investigative journalism, and are less aware about the personal risks, and financial hardship that comes with it. Doing what we do here, for nearly two decades, belongs in the realm of extreme charity. How can anyone be so deranged as to try to gain credit for somebody else's charitable work?

Venezuela is a banana republic, a failed state for all intents and purposes. It is also the Western Hemisphere's most corrupt country. Piercing the veil of disinformation and propaganda of even such a place, however, requires blood, sweat and tears. We have suffered, directly, legal threats, terrorism, defamation campaigns, assaults, break in, theft of laptops, forced exile, and gotten countless other forms of intimidation by the thugs we expose here in their desperate and futile scrub reputation attempts. Our audience is not large, and it was never meant to be. Our target has always been law enforcement. In that field, we are also unique, as many of our investigations ended up triggering criminal probes in different jurisdictions. This is the main reason why this site has become a favourite for plagiarists.

Latest example, again, is Alex Saab and his Libre Abordo gig with Nicolas Maduro's regime. As soon as we posted our story, federal agencies started looking into Libre Abordo, Schlager Group and Elemento. Reuters then lifted our story, followed a few days after by Bloomberg. Alas this is not the first time either use our work on the specific topic of Alex Saab.

In early January 2016 we posted about Trenaco, a little Colombian shell connected to Saab. It was about a mega energy deal (~$20 billion) in the works. We revealed the connections to Colombia's Gustavo Petro, Swiss registry details linked to a Venezuelan lawyer, increase of capital, etc. Six months later, Reuters produced an "exclusive", recycling most of what we'd exposed.

In April 2019, on another hit job about Saab, this time by Bloomberg, again information published by us was used without attribution. When confronted a Bloomberg person told this site they couldn't credit our work.

Our seminal reporting on Alex Saab ended forming the basis of a Department of Justice indictment against him. Saab is now a criminal, a wanted man. Other Venezuelan thugs share same fate, thanks to our work.

Our investigative reporting has filled books and countless "news reports" over the last 18 years, more often that not without attribution. It continues to be a mystery for us how any "professional journalist" can seriously attempt to misuse / misappropriate our work, and claim it as an exclusive, when a simple Google search can prove the contrary. Every college student / graduate in the developed world knows about plagiarism, however the premise  keeps eluding journalists covering Venezuela.

As soon as I saw Bloomberg's piece I confronted Ben Bartenstein via Whatsapp. I asked why was he plagiarising my work. He replied in the most disingenuous way, first asking who I was (Bartenstein's first email regarding this site's work dates from April 2016). Then said he didn't follow, then said he was busy with some Argentina stuff, to less than 20 minutes after first reply adding "feel free to call".

I also sent an email to Bartenstein around same time, asking for contact details of person responsible at Bloomberg to deal with formal plagiarism complaints. This was replied by Lynn Doan, Managing Editor of Energy and Commodities Americas, with details of Laura Zelenko "senior executive editor of news standards". Despite claiming not knowing who I was, or what was I talking about, a visitor from Bloomberg's IP addresses  checked this site's Libre Abordo piece twice. Bartenstein is a regular visitor to this site, and has recently been reading our posts about Francisco D'Agostino (Elemento Ltd) and Libre Abordo, that is two of the main topics in yesterday's hit job.

We look forward to Zelenko's reply to our plagiarism complaint, while stressing to all plagiarising hacks out there that chronology can't be beaten. 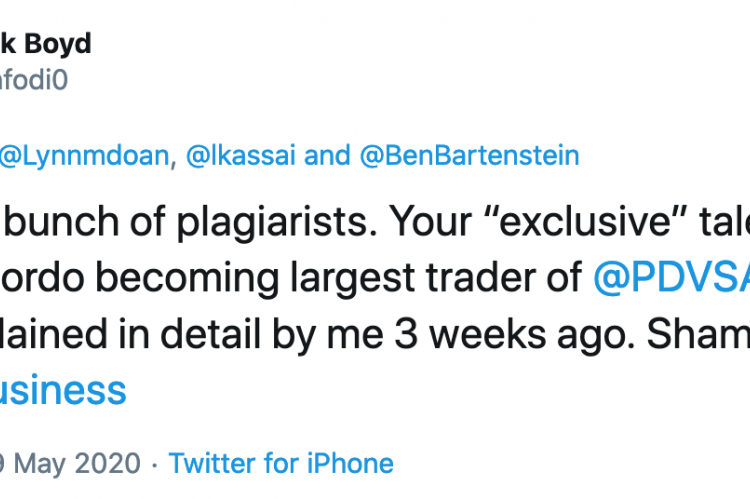