The "Who is...?" series is a new type of article this site will be posting on a regular basis. Given that the editor of this site has become a source for journalists, bankers performing KYC, prosecutors, immigration authorities, public policy analysts, intelligence agencies, and concerned citizens, such research will be published in a simpler and more comprehensive way.  The "Who Is" series is an attempt to provide accurate, factual snapshots of some of the most notorious members of the clique inside corrupt governments and enabling societies. Readers can use the contact page to suggest future profiles. Who is Andrés René Guzmán?

Executive Director of Yaciretá Binational Entity, a joint Argentina - Paraguay commission that built and runs the Yaciretá Dam, and “the Minister” is none other than Julio de Vido, Argentina's Minister of Planning and Public Investment. Who is Frank Holder?

As the dust settles in the spurious lawsuit against Banco Venezolano de Credito brought by proxies of the Venezuelan regime (Derwick Associates), it is worth exposing some of the parties that participated in this malicious charade. FTI Consulting deserves special mention. It is a public listed company, that deals in a number of things, among which PR management. Who is Wang Jing?

Nearly all reports written on the topic since have questioned Nicaragua's choice of partner: a Chinese individual called Wang Jing. More from the BBC: "The Chinese businessman behind a $40bn (£26bn) plan to build a canal through Nicaragua has promised transparency and insisted his project is not a joke." Luis Oberto (aka Luis Alfonso Oberto Anselmi) one of the most discreet members of the Venezuelan Boliburgeoisie. A mention here, another there, it seems that Oberto has been able to fly under the radar for quite some time now, although INFODIO readers -an extraordinary source of information on all these white-collar thugs- have been sharing intel on Oberto and his operations. Ruperti knows his market. Before 2002, he was a "tanker master", that is a ship captain who most probably was living on a meagre public servant's salary. Like other Venezuelan "entrepreneurs", Ruperti likes to pretend that he is some sort of tycoon, a criollo version of Aristotle Onassis. However, in a little known document from the Commercial Court of the Queen's Bench Division of England's High Court of Justice, Novoship UK Ltd v Wilmer Ruperty et al (Case No: 2006 FOLIO 1267), Ruperti provides as good as a yet-to-be-let-known explanation as to how, exactly, he became a "shipping magnate". Ruperti's knowing the market consists of a tried and tested formula: exploit contacts with key Venezuelan officials, keep them sweet, and see how your wealth mushrooms Alejandro Betancourt (a.k.a. Leopoldo Alejandro Betancourt Lopez, Leopoldo Betancourt, Alejandro Betancourt Lopez) is a chavista wunderkind and CEO of Derwick Associates. A 'pioneer and global entrepreneur' he seems to be preparing his move to Spain, considering the tough times in his native Venezuela. Given his worldwide 'stature' as a 'businessman, philanthropist, innovator, and financial wizard,' Mr. Betancourt’s PR team recently unveiled a new website: AlejandroBetancourt.Es (notice Spain’s TLD) to serve as his presentation card to the world. Betancourt's "aristocratization" process (honouring geografical context I shall define it as "Slimification" or the process by which LatAm businessmen with dubious pasts / credentials and even more questionable wealth become "respectable") merits some scrutiny. Let's just skip the puff piece his PR people put up in Wikipedia, and head to his very own bio page, which is a superb place to appreciate the 'achievements and record' of a man of his 'stature'. Who is Juan Carlos Escotet?

"In the 15 countries where BANESCO INTERNATIONAL FINANCIAL GROUP operates, which includes the USA, it complies with the highest anti money laundering prevention and control standards. This stance, based on our Code of Practice, is recurrently verified, both by internal mechanisms and by competent authorities in each of the countries we operate." Who is Miguel Angel Capriles Lopez? Readers appreciative of this kind of investigative posts feel free to make a donation. Next in series [information / leaks welcomed at alekboyd at protonmail dot com]:

Who is Jose Vicente Rangel?

Who is Gustavo Cisneros?

Who is Victor Vargas Irausquin?

Who is David Osio?

Who is Norberto Odebrecht?

Who is Roberto Rincon? 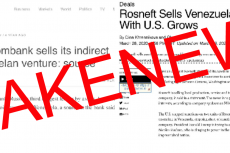