Joshua Goodman reports in "Venezuela hired Democratic Party donor for $6 million" about a FARA filing -by PDV USA Inc- that "...documents, which were disclosed Thursday, show a U.S. subsidiary of Venezuela’s state oil giant PDVSA agreed to hire Marcia Wiss’ Washington law firm in March 2017. That’s the same month it signed a consulting deal for $50 million with scandal-tainted former Congressman David Rivera." Goodman further added "The contracts have come to light as allies of opposition leader Juan Guaidó work with the Justice Department to uncover any corrupt dealings at another wholly owned PDVSA subsidiary, Houston-based Citgo, which for years operated as a cash cow for Venezuela’s ruling party." [bold added] Guaido's actions might bring him, Lilian Tintori and boss Leopoldo Lopez down.

If true, Guaido's alleged work with the Justice Deparment could well be his undoing. Under his watch, humanitarian funds released by the U.S. government have been misused by his close collaborators in prostitutes, booze, and who knows what else. Prospects for his boss Leopoldo Lopez, however, are worse.

David Rivera was contracted by instrumentalities of PDVSA in the U.S. for lobbying in 2017. The contract, for $50 million, was never executed properly, though Rivera got $15 million. The Miami Herald reported that, from that sum, Rivera paid $4 million to Raul Gorrin to "prevent U.S. sanctions".

Univisión then reported that Raul Gorrin gave $500,000 to Lilian Tintori, wife of Leopoldo Lopez. The donation allegedly took place after Tintori solicited funds to Gorrin during a breakfast at Gorrin's mansion in Miami in 2017. Univisión further reported that funds given by Gorrin to Tintori originated from PDVSA's lobbying contract with Rivera.

As to the nature of PDVSA being a foreign principal, Tortolero's document states:

"The Bolivarian Republic of Venezuela is the sole owner of Petroleos de Venezuela. The Venezuelan government, through the Ministry of Energy and Petroleum, establishes national petroleum policies and also regulates and supervises PDVSA's operations. The President of Venezuela appoints the president of Petroleos de Venezuela and the members of its board of directors by executive decree (these procedures were, however, amended by statute enacted by the Venezuelan National Assembly as of February 2019). The Shareholder's Meeting, the highest governing body of PDVSA, constituted the ultimate authority over the direction and administration of PDVSA. The decisions of the Shareholder's Meeting were binding, within the limits of its powers, on the company. Venezuela was represented by the People's Power Minister of Petroleum and other ministers that the President of Venezuela appointed. The powers of the Shareholder's Meeting included: approving the annual report of the Board of Directors, as well as the financial statements and consolidated budgets of investments and operations of PDVSA and subsidiary companies or entities; defining the functions and duties of the members of the Board of Directors; and issuing regulations on internal organization. As sole owner of PDVSA, Venezuela may have subsidized or financed components of PDVSA's operations or business during the relevant period."

Regarding activities, Tortolero explains that "Until January 2019, PDV USA provided shareholder services to PDVSA, including engaging vendors on behalf of PDVSA. From 2015 through 2018 PDV USA engaged three vendors to perform FARA-registrable activities. These engagements, which are the subject of this registration, were made on behalf of, and at the direction of PDVSA."

PDV Holding new board, hand picked by Guaido, is responsible for the filing. We find fascinating, and unprecedented if true, that Guaido would be keen to engage with DoJ to "uncover any corrupt dealings". In 2017, when PDVSA entered these contracts, Guaido was Head of Venezuela's Congress Audit Commission. He was busy then, exonerating the likes of Mauro Libi, an utterly corrupt chavista Boligarch.

If a serious DoJ probe is launched, the first victim will be Guaido himself, followed closely by Lopez / Tintori, who despite preposterous protestations, have had a very public and documented engagement with Gorrin. That is, the very corruption between PDVSA and Rivera that Guaido wants to expose and investigate now, links straight back to Lopez and Tintori. It won't be too much of a problem, for DoJ, to map the corrupt networks in which Tintori has always moved in Miami, starting with Fabiola Colmenares and former chum Gonzalo Morales Divo. DoJ should also take a good look into Guaido's appointees, like Jose Ignacio Hernandez, and how CITGO and its funds have been managed.

Equally notorious is the widespread misuse of humanitarian and USAID funds during Guaido's "interim presidency", Guaido's closest relatives' association with Alejandro Betancourt, Gorrin's instrumental participation in getting Lopez from house arrest to the Spanish Embassy during botched attempt in 30 April 2019, links between Tintori, her sister and Julio Herrera Velutini, that is, should DoJ approach toward this investigation be the same as that applied to criminal probes related to chavismo, or the Boliburgeoisie, we anticipate the whole Guaido political structure will end up indicted. 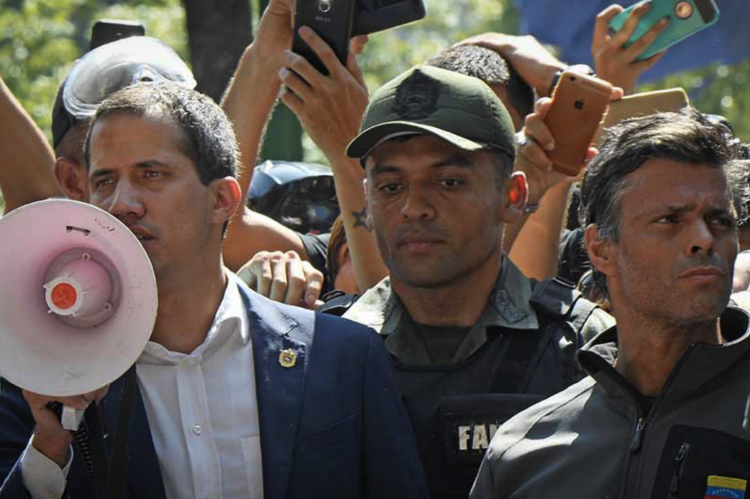