Who is Wang Jing? Man behind Nicaragua's canal project is as dodgy as they come.

BBC Mundo reported on 13 June: "La Asamblea Nacional de Nicaragua aprobó, por 61 votos a favor, 25 en contra y una abstención, la construcción de un canal similar al de Panamá, que una los océanos Atlántico y Pacífico." Translation: "Nicaragua's Congress approved by 61 votes for, 25 against, and 1 abstention the construction of an interoceanic canal similar to Panama's." Understandably, given its geopolitical significance, an avalanche of news followed. Nearly all reports written on the topic since have questioned Nicaragua's choice of partner: a Chinese individual called Wang Jing. More from the BBC: "The Chinese businessman behind a $40bn (£26bn) plan to build a canal through Nicaragua has promised transparency and insisted his project is not a joke." 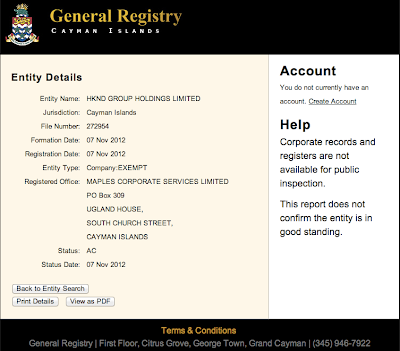 Having failed to find a directory of companies at 2 International Finance Centre, I called the concierge and was told that due to "privacy issues" no information about their tenants can be given. The concierge refused to confirm whether HK Nicaragua Canal Development Investment Co., Ltd. had offices in that building. When I asked whether it was a secret which companies had rented offices at 2 International Finance Centre, the lady told me that if I wanted to know, I had to go there in person and check in the buildings' board. So much for transparency... 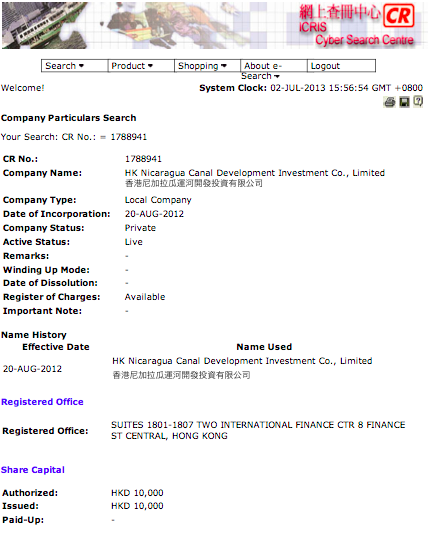 So Wang Jing's HKND, a $1,200 venture registered just two weeks before a memorandum of understanding was signed (5 September 2012), was "identified" by Nicaragua's Interoceanic Authority as "the most adequate partner" to carry out a $40 billion project to rival the Panama Canal. For the purpose of the project, HKND acquired in April 2013  Nicaragua's Empresa Desarrolladora de Grandes Infraestructuras S.A. Of note, the fact that Jing's Cayman Islands' venture was created after the MoU was signed.

But who is this Wang Jing? What is his track record in the infrastructure and engineering field?

Wang Jing is meant to be the boss of Xinwei, a telecoms company formerly owned by State-owned Datang Telecom. Hong Kong records show that he resides at no. 3001, unit 1, Building no. 3, FANGQUNYUAN YI QU, in Beijing's Fengtai District. He says he lives with his mother. As per archive.org records, Jing's first reference as chairman of Xinwei appears in Xinwei's website in March 2010. By that time Xinwei had been taken to private hands, although a few photo ops with leaders of China's Communist Party visiting pepper Xinwei's website. Xinwei appears to have patented a system called McWill, which it claims to be "the only commercialized 4G technology in the world." Xinwei claims that said technology is used in more than 20 countries. Mcwill's site was registered by Gang Huang from Beijing Holland, a Chinese purveyor to the "cable & wire industry as well as electrical equipment industry." Certainly, the "world's leader in 4G technology" website leaves a lot to be desired.

Jing, who refused to say what university he had attended, claims to have made his money mining in Cambodia. As far as our research goes, there's no evidence of such activities. Anywhere. Jing has said that international investors will come up with required funds ($40 billion), but has failed to name a single investor. Feasibility studies are meant to be conducted by McKinsey & Co, while other individuals, such as Li Chuan of Kirkland & Ellis International LLP, Bill Wild, and Ronald MacLean-Abaroa were part of Jing's entourage in Nicaragua.

While Jing claims that China's Railway Construction will also participate in conducting feasibility work, there's no official evidence to that. Anywhere. Furthermore, reports in Chinese media warn that the project is fraught with risks, and most likely unviable, given its geopolitical significance. The argument, in short, goes that the US government is not about to allow China to build and control an interoceanic canal in Nicaragua.

The most shocking aspect of this issue is not even Jing's lack of credentials, track record and funds. But rather the way in which Daniel Ortega, the utterly corrupt and pedophile President of Nicaragua has renounced his country's sovereignty in this deal (see annexes in agreement below). The plans include, in addition, construction of the following:

Nicaraguans are, understandably, incensed by this. In telecoms, which is meant to be Jing's "area of expertise", Nicaragua also granted him a license as mobile phones services provider in January 2013. Jing said that his Xinwei would invest $2 billion, $700 million in the first year. As of today, not one line has been offered and the company has no presence in that market. How could Jing, a manwithout track record in similar projects and with a couple of companies whose capital probably don't exceed $10,000, make the government of Nicaragua agree to a 50-year (plus renewable periods) deal? How could the government of Nicaragua agree to rubber stamp an agreement where it is claimed that Jing's company "has plenty of power and corporate capacity to fulfil its obligations and execute its plans"? How will Jing come up with $40 billion, if, as widely reported, the Chinese State is not behind him? Why would Nicaragua renounce -irrevocably and unconditionally- the sovereignty of its Central Bank in relation to this project? Why would Nicaragua give a little known Chinese man the power to expropriate whatever private property he wishes? I beg to differ with Jing: unless China provides backing this project is a joke.

ACUERDO MARCO DE CONCESION E IMPLEMENTACIÓN con relación a EL CANAL DE NICARAGUA Y PROYECTOS DE DESARROLLO by alek_boyd
The "Who Is?" series is a new type of article I shall be posting on a regular basis.  Given that this blog has become a source for journalists, bankers performing KYC, prosecutors, immigration authorities, public policy analysts, intelligence agencies, and concerned citizens, I have decided to publish research in a simpler and more comprehensive way.  The "Who Is" series is an attempt to provide accurate, factual snapshots of some of the more "colorful" members of the fauna inside corrupt governments and enabling societies. Readers' suggestions for a "Who Is?" profile can email me at alek dot boyd at gmail dot com.