Hugo Chavez used to rule through TV screens. Never one for orthodoxy, the putschist's command of telecasts was legendary. He rose to power thanks to his "por ahora" speech in 1992, calling rebel armed forces to surrender, and once in power, he commandeered airwaves like no one had ever done before, or since. Nicolas Maduro doesn't have that gift, his public addresses are very disagreable events. And then Venezuela has produced another first in Juan Guaidó: government by hashtag.

#VamosBien. It means, the going is good, we're on the right track, we're doing good. Could be an offspring of Teodoro Petkoff's "estamos mal pero vamos bien", and Guaidó wants to shield us from reality ("estamos mal"). In any case origin is unknown. What is inescapable, to this observer at least, is Guaidó's lack of substance. Government by hashtag is the epitome of another vernacular saying: "como vaya viniendo, vamos viendo", which means make it up as we go along.

Hundreds of thousands of people in rallies, in the Venezuelan context, mean jack, as the whole world painfully saw recently. It continues to be a problem that opposition to Maduro's regime is concentrated in Venezuela's large cities. On the one occasion that hundreds of thousands were needed to shield entry of humanitarian aid, Guaidó didn't manage to rally the troops.

Photo ops with foreign leaders are also worthless, within Venezuela's borders. Guaidó's number one priority is "cese de la usurpación", which means Nicolas Maduro is expected to surrender his position and power. How exactly will that happen: by tweets from John Bolton, or pictures posted by Comandante Rubio? By #alloptionsonthetable hashtag? If the first step in Guaidó's plan is to get Maduro to leave, the leaving part, how will that come about?

Nicolas Maduro's regime is not an orthodox government, but a hybrid, composed by totally corrupt military engaged in drug trafficking, totally corrupt institutional framewok, terrorist groups, organised and non-organised crime, guerrillas, kingpins, and other non-complying apolitical actors. We have seen how Guaidó is basically gifting posts to friends and family. But where are the appointees that will deal, for instance, with ELN, now emboldened enough to re-engage in terrorist killings in Bogotá?

How about external but equally important actors, like Cuba? Who is the Russian affairs designate? Who's talking to the Chinese man, and to Erdogan? The truth is, there's no plan but a common-shared wish that, somehow, Maduro will leave, relinquish power and in so doing will convince all of the above to lay arms, abandon schemes that generate billions and go with him. It is sheer insanity to have such expectation, and until Guaidó does not provide clear examples of how will the chavista mess be dealt with, I'd say there is not a single chance that a transition will succeed.

Imagine, for instance, what Francisco Morillo and Swiss energy traders sued by PDVSA must think when seeing the expert they hired being appointed by Guaidó as Procurador (General Legal Counsel): "why, thank you very much indeed Henry Ramos Allup!" Morillo is playing in the same game the most powerful boligarchs -from Raul Gorrin to Alejandro Betancourt, the Oberto brothers, Coco and Michu Capriles and Danilo Diazgranados- are actively engaged with these days: oiling Guaidó's platform so amnesty is guaranteed.

It's early days allright, but the Obama from Naiguatá is far, very far indeed, from getting it. We are not the party faithful, we are not taken by the looks and warm smile. Our role isn't to blindingly celebrate Guaidó's every measure, return, tweet, photo op, or hashtag, but to point the inconsistencies, failings, corruption, nepotism, and lack of vision. We have no time for idiotic and baseless triumphalism. If a truly democratic Venezuela is to emerge from chavista scorched earth time, a much more mature, intellectually deep, and capable opposition must take charge. Guaidó and his mates ain't it. Much more needs to be done. 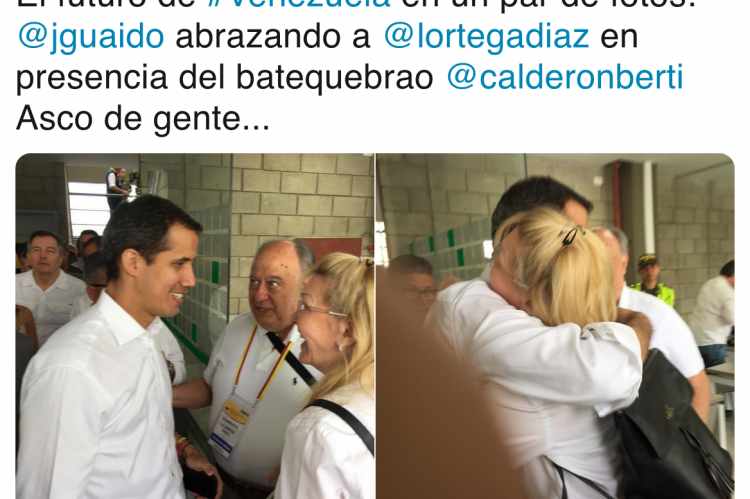