The U.S. Government Accountability Office (USGAO) released a report yesterday, "Additional Tracking Could Aid Treasury's Efforts to Mitigate Any Adverse Impacts U.S. Sanctions Might Have on Humanitarian Assistance", which found that "Despite U.S. federal agency efforts to identify and ease potential negative humanitarian consequences of such sanctions, humanitarian organizations still face problems serving Venezuelans." We read the, erm, accountability report, and found no mention, for instance, of Juan Guaido's close collaborators spending humanitarian aid funds in prostitutes and booze in Cucuta. We found no mention of destination of USAID funds given for rural development to Futuro Presente, an NGO controlled by Yon Goicoechea. The chapter "Humanitarian Organizations Report That They Continue to Face Challenges in Assisting Venezuelans" (p. 33), says nothing about mismanagement of humanitarian aid resources by the very "USAID implementing partners" that USGAO interviewed for the report.

We find intellectualy dishonest, in the extreme, to blame U.S. Treasury sanctions on the current Venezuelan economic debacle. The USGAO report claims that since sanctions started in 2015, Venezuela's economy has been negatively affected. When it comes to chavista corruption, PDVSA's oil sales between 2001 and 2016 were $1.305 trillion USD. Venezuela and PDVSA issued ~$180 billion worth of debt in that period. A conservative estimation will bring total to over $1.5 trillion, of which not much is left.

How could USGAO even suggest sanctions as reason underpinning current predicament truly escapes us. Had chavismo not wasted $1.5 trillion, no amount of rather innefective sanctions would have impacted. The debate must start, and must finish, with the real culprit: rampant corruption, the sort that given free rein bankrupts even a resource rich petrostate.

The U.S. government, through its Departments of Justice and Treasury, has done some work over the last decade, to fix the problem. Alas it's always been meek, timid, extempore: attempts to cure terminal cancer with a band-aid. Take, for instance, the referred Treasury sanctions regime, studied by USGAO. American companies and individuals have been, largely, forbidden from further business with chavismo. No secondary sanctions have been imposed. Not even already imposed sanctions have been enforced on parties that are openly in breach (case in point Gazprombank Latin America Ventures, GPB Energy Services). Some visas have been cancelled to chavista operators. Banks accounts in the U.S. have been shut and funds frozen. But there's a whole world out there eager to fill the void. Switzerland will happily take all diverted corrupt proceeds. Russia, China, Turkey, Iran, Cuba, the UK, Spain, France, Italy, Singapore, the UAE, Colombia, Mexico, the Caribbean, to name but a few, are chock full of people, companies, banks, vessels, clearing houses, officials, etc., that have replaced American counterparts and are, literally, laughing all the way to their non-USD denominated bank accounts.

More exhibits: Rafael Ramirez, Hugo Carvajal, Nervis Villalobos, Javier Alvarado, Alejandro Betancourt, Alessandro Bazzoni, Francisco D'Agostino, Danilo Diazgranados, Charles Henry de Beaumont, Joseph Benhamou, Luis and Ignacio Oberto... there they are, in their respective plush residences in Europe, Mexico, the Dominican Republic, cracking up at the sanctions, laughing at U.S. government's inability to even get to them. Not even Alex Saab has been pried away from Cape Verde, from Cape Verde FFS!!!

It is an absolute joke, to think that closing one part of the global stream of commerce is going to have an impact on those who have "made" fortunes precisely avoiding it. Europe, Latin America, the Caribbean are very nice indeed, when sitting on hundreds of millions, or billions, stolen from Venezuela. Money, in whatever denomination, is accepted everywhere.

Mind, the USGAO report didn't even get right the figure of Juan Guaidó: he wasn't "sworn in as National Assembly President on January 23, 2019". He swore himself in. There was no formal act, of the Congress he presided, supporting his middle-of-the-street swearing in charade.

Until the real cause of the problem is tackled, Venezuelans will continue to suffer. They are victims of a political system wherein the only concern is self enrichment. This has nothing to do with sanctions, and all to do with corruption. First thing USGAO should’ve done, is to check what U.S. political allies from Venezuela are doing with whatever funds they do get. Arguing that "humanitarian organizations assisting Venezuelans are still experiencing some challenges delivering assistance", without acknowledging how, for instance, prostitutes, alcohol and corruption hinder delivery of said assistance is, quite simply, dishonest. 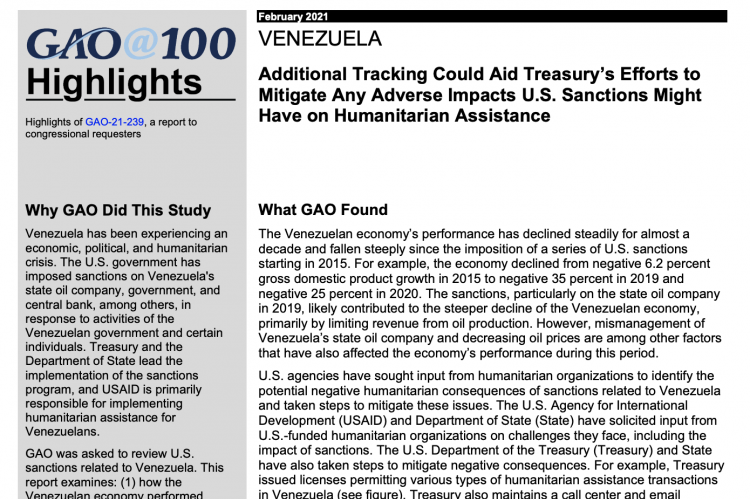