Raul Gorrin Belisario, it could be argued, is the one boligarch with access to circles that matter in Venezuela: presidency, supreme court, army, intelligence, and boliburgeoisie. As such, he was right in the thick of an "arranged" coup, whereby Juan Guaido and boss Leopoldo Mandela were going to topple Nicolas Maduro. Trump administration officials were au courrant, encouraging the enterprise. Venezuela's Supreme Court Chief, Maikel Moreno, arguably an employee of Gorrin, was in on it. Vladimir Padrino, Venezuela's National Armed Forces boss, also took part. Gorrin, who has direct access to Nicolas Maduro and Cilia Flores, was the orchestrator in chief. That someone so close to the powers that be in Venezuela is even remotely considered as an honest broker by U.S. officials purportedly keen on seeing the end of chavismo is the epitome of what Kim Darroch* described as an "inept" administration.

Gorrin shot to fame, not long ago, as one of the thugs that have basically looted Venezuela. He cut his teeth as the go-to-guy to have criminal probes buried forevermore: a "protection" racket, set up with Luisa Ortega Diaz, that guaranteed freedom from prosecution for princely sums. He then became an "entrepreneur", and started all kinds of money laundering schemes centered at Venezuela's Treasury. From there and already a billionaire, he moved onto similar activities with PDVSA, assisted this time by Alejandro Betancourt and Francisco Convit, who had a direct line to Rafael Ramirez through Nervis Villalobos.

Betancourt and Convit themselves have had a stellar career in Venezuela's Grand Theft. Even before graduation, if we are to take their BS at face value, they formed Derwick Associates. Then a school-mate-cum-son-of-BARIVEN-boss got them into power generation procurement, through which they pocketed -through overpricing- over a billion USD according to expert estimates.

That billion wasn't enough, of course. So these born again "entrepreneurs" then partnered with Luis and Ignacio Oberto, and set up a money laundering scheme and embezzled some $4.2 billion from PDVSA (through Violet Advisors and Welka Limited during Ramirez's reign). Gorrin, who was central to an even bigger scheme at Treasury, and had done similar deals with the Obertos, must have thought that partnering with Convit and Betancourt was just the natural progression, and so he did partner with them, in a money laundering replica scheme centered again at PDVSA (through Eaton Global and Rantor Capital) assisted by Carlos Erick Malpica Flores (Cilia's favourite nephew), energy schemes (Petrosur), and lobbying in DC.

And so many years later, the Justice Department caught the lot of them, with their pants down, and proceeded to indict and charge Gorrin, his benefactor at the Treasury Alejandro Andrade, Convit, and some of the PDVSA underlings that signed. Alas Betancourt is still to be indicted, despite certainty of his role. A case of some thugs being more equal than others, in which Rafael Ramirez, father of all gargantuan corruption schemes at PDVSA, is a key part.

Curiously, while Ramirez would like to escape pending probes all over the place by replacing Maduro, as the true representative of chavismo originario, Gorrin, Betancourt and Convit are putting their time, not inconsiderable resources, network and ill gotten wealth to ensure continuity of business in a -very unlikely- transition.

While Gorrin is cooking all manner of political deals between chavismo and the opposition, Betancourt is feting Guaido's brother in Madrid and having meetings about "regime change" in Venezuela. Having close connections to Leopoldo Mandela surely helps. So on April 30th, when Guaido scooped the world with a coup that never was, Betancourt was on his jet to Venezuela, presumably to celebrate the return of democracy and freedom. It wasn't to be though, so u-turn back to Madrid, or London, till further notice.

But there's something sinister going here, something those inept American officials are missing, entirely. Betancourt and Convit are in business with the Russians, the sort of Russians that are accountable directly to Vladimir Putin.

In a completely unprofessional email exchange, Orlando Alvarado (CFO in various Betancourt / Convit shells) berates Victor Rivero, Operations and Quality Manager for Nynas in Venezuela. Alvarado was incensed by Rivero's decision to return to Petrozamora a crude cargo that had higher than acceptable water levels.

Petrozamora is the JV formed between Gazprombank and PDVSA. Betancourt and Convit obviously got into that thanks to Ramirez. A "bonus" of some $904 million was paid to PDVSA. Petrozamora thus became, as per Rivero's claim, Nynas largest crude provider. In his rant, Alvarado emailed Rivero the following:

Most interestingly, Alvarado did not see a problem in having over 30 PDVSA, Nynas, and Venezuela's Petroleum Ministry officials copied in the exchange, but crucially, he also added in CC the email address of Vladimir Anisimov (Vladimir.Anisimov@gpb-ngs.com). This Anisimov character seems to be a former FSB General, who was Deputy Head of FSB's Internal Affairs department. Do note the gpb-ngs.com domain and who it belongs to: GPB Global Resources, headed by Boris Ivanov, partner of Betancourt and Convit's Derwick Oil & Gas in Gazprombank - PDVSA Petrozamora joint venture.

So let us spell this out very clearly indeed: any negotiation involving Messieurs Betancourt and Convit is almost certainly known by the Kremlin; any promise of immunity from prosecution negotiated by Messieurs Betancourt and Convit is known by the Kremlin; any deal offered or in the works is known by the Kremlin. Thanks to Betancourt, Putin knew before anybody of mercenary plans being pitched around by Erik Prince. Hence this site's argument that it is Lavrov, and not Pompeo, who knows exactly what's going on in Venezuela. That gives his boss much leverage, and an advantageous position in any and all Venezuela-related, back room discussions with the Trump administration.

Whatever Maduro and his crew don't volunteer to Putin, in exchange for protection, Gorrin, Betancourt and Convit bring in spades. Putin knows, with precision, what is really happening in Guaido's camp, who are the turncoats that Gorrin has lined up to further oxygenate and re-invigorate chavismo, he's privy to discussions of Leopoldo Mandela and his hand picked "officials", you know the ones tasked to "recover Venezuela assets" and "renegotiate / restructure Venezuela's debt", as much as about deals being brokered with Henry Ramos Allup, Manuel Rosales, Julio Borges and Henrique Capriles. And by sheer fear of consequences, Putin has quite possibly the unadultered version, not the crap that Gorrin et al and opposition politicos are feeding utterly inept Trump officials. In short, Putin knows what's really going on inside chavismo, opposition and boliburgeoisie: that's two and half sides more in a problem Uncle Sam is mostly blind about.

In such scenario, who can muster hopes of a transition?

Nothing will ever happen to the likes of Gorrin, Betancourt and Convit in Venezuela, regardless of who's in power. The hope has always been that international probes spearheaded by the Justice Department will change that. But such probes are far too slow, conducted by law enforcement officials far too disconnected to peers in other jurisdictions. Al Capone was brought down on tax evasion, law enforcement famously only needed to prove one crime. Same in other historic cases of large criminal organizations, like John Gotti and the Gambino crime family. Though when it comes to modern, criminal organizations of global scope, like chavismo, with allies like Putin, there's very little the Western world can do against them.

There are mountains of incriminating, water tight evidence against chavismo and the boliburgeoisie. As I keep telling law enforcement, just this site has posted enough to put some of these thugs away for a very long time. We can prove, beyond all reasonable doubt, the crimes of Betancourt, Convit, Gorrin, the Obertos, Alex Saab, Smartmatic, etc. While America keeps entertaining impossible scenarios, Putin, Maduro, the Cubans, Gorrin et al are, alas, having a laugh and playing liberators.

*Even a broken clock is right sometime. Bit rich for UK officials to be calling anybody, anywhere, inept, considering the state of Brexit, May, Corbyn, Osborne, Cameron, Gove, Nigel Farage, Gordon Brown... and the certain prospect of Boris Johnson becoming PM. When talking about ineptness, the UK takes the cake! 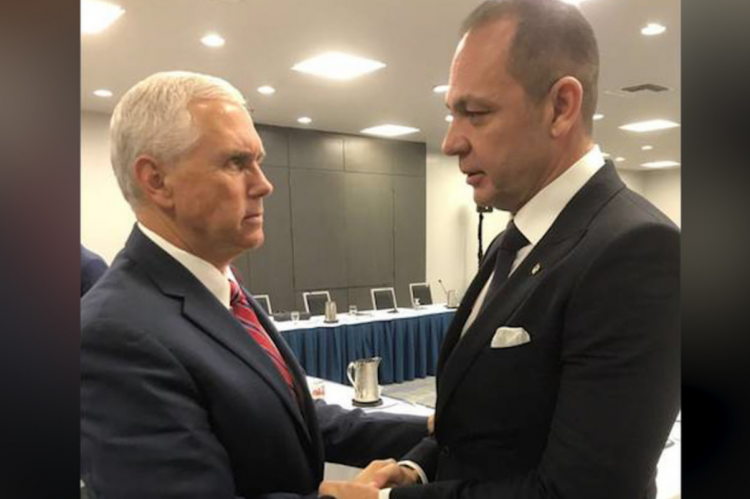