Compliance and KYC documents seen by this site show that Pictet opened three bank accounts (128588, 128589, 128590) for Adrian Velasquez and Carlos Gill in early December 2013. Isaac Topel was in charge of account openings on intros made by Alberto Valenzuela and Jose Antonio Gago. Accounts ending 88, 89 were for a credit card and a company belonging to Velasquez in Nevis. Account 128590 was for Gill. It was named Center Valley AVV, in turn a shell registered in Aruba owned and managed by Gill. While Gill is presented as chief of Corimon and has a previous track record in banking, Pictet's Topel argues that Velasquez, an army lieutenant married to Claudia Diaz Guillen involved in turn in large scale corruption at Venezuela's Treasury, "inherited from his father in law (Daniel Diner) who was active in the real estate" (sic - Daniel Dyner) sector.

The source of the funds (initial $40mn and up to $100mn) was to be the sale of some shares in Corimon owned by  Velasquez and Gill, as per docs. Gill's net worth is put at $700mn. On 16 December 2013, Velasquez wires $30mn from MJ Box Tool's account at BSI Lugano (client ID 12270059) into Gill's 128590 Pictet account. Subsequently Gill makes a number of transfers, to purchase planes, redecorations, commissions on acquisition of Bridgestone's operations in Venezuela, etc.

To justify Velasquez's unexplainable source of wealth, Topel makes up this story about how Velasquez, along with brother Josmel, created MJ Box Tool to service the oil industry in Venezuela and the US, and how Velasquez met with Gill in the year 2000, and upon leaving the army how Gill "took him under his wing and became his mentor" ("... il l'a prit sous son aile, c'est son mentor.")

Furthermore, on 20 December 2013, Gill wires $7mn to José Luis Manzoni, accused of fraud, whose father José Luis Manzoni Wasmosy owned Azucarera San Luis in Paraguay. Gill is, allegedly, Paraguay's honorary Consul to Venezuela and has a portfolio of international investments from Bolivia all the way to the poshest parts of Madrid. Gill is particularly interesting in Venezuela's Corruption Leagues due to his connections to completely dodgy bankers, such as Jose Zambrano and his own brother Victor Gill, father in law in turn of Luis Oberto... Given Gill's position, just why would he go into this sort of deals with Velasquez if he were legit?

There is one other interesting deposit into Gill's Center Valley account at Pictet: Fintech Investments Ltd (David Martinez) wires from UBS $1,250,000 into Gill's account. Is Martinez managing some of Gill's assets?

A request for comment put to Isaac Topel was replied with the usual BS by Pictet's Head of Corporate Communications Frank Renggli, who claimed that Pictet couldn't "comment on potential, past, existing as well as non-existing client relationships." Hopefully, the DoJ will force Pictet to account for its money laundering services to Adrian Velasquez and Carlos Gill.

Note to visiting media: if you're going to use info contained in this site, do cite the source. 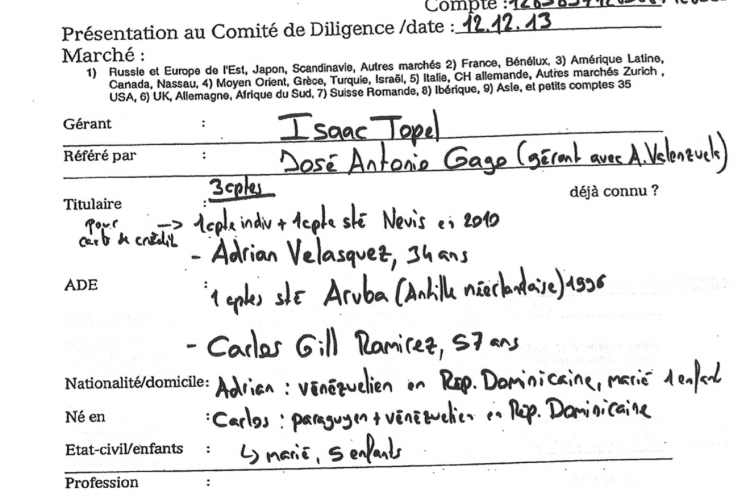