Petroleos de Venezuela (PDVSA), lest our American friends forget, is the principal engine of whatever is left of Venezuela's economy. It has always been thus. Whatever happens with / to PDVSA, is a matter of great significance to / for Venezuela and its citizens. PDVSA launched in Florida and Switzerland competing fraud claims -against Glencore, Trafigura, Vitol, Lukoil, etc.- in what its legal counsel presented as one of the largest corruption schemes to hit the energy giant. A scheme that, allegedly, lasted years and cost the company billions in losses. The manner in which the scheme was perpetrated is of huge interest, as the identities of PDVSA, Trafigura, Glencore, Vitol, Helsinge and Lukoil executives involved. But the manner in which the whole complaint came to be, the involved lawyers and investigators, the individuals who provided the evidence, the connections of these to PDVSA officials, is equally relevant. We want to hear the merits of the case, for sure, and we also want to know why, for example, PDVSA decided to gift 66% of case potential proceeds to David Boies, Alex Pencu, Bill Duker and John Brennan.

Who negotiated this? Who approved it? How did it get approved? Why David Boies, America's "pre eminent litigator", doesn't want us to know? What has he got to hide?

Boies tried -unsuccessfully- to keep from view the Engagement Letter, which lays out the undeniably corrupt arrangement it brokered with PDVSA. Now Boies is trying, and has failed again, to keep the arrangements between Brennan, Duker, Wilmer Ruperti and Vanessa Freedman under seal. Boies does not want Venezuelans -which he preposterously claims to represent- to know how PDVSA US Litigation Trust was set up; who got the case going; who is the financier (Duker) and to what extent is he involved; what arrangements were made between the investigator (Brennan) that first obtained the evidence of wrongdoing upon which the case is based and the financier; the role of Wilmer Ruperti and Vanessa Freedman (estranged former wife of principal defendant Francisco Morillo) in the provision of said evidence; in sum, Boies and his merry band of fellow travellers want us to just take everything they say at face value, and ignore the elephant that occupies 66% of space in the room, along with Wilmer Ruperti's direct involvement.

This site has tried to get a word from Ruperti, and from Boies, and from Brennan, and from Duker, and from Pencu, and from Freedman. Thus far, only Ruperti and Freedman have answered, the former with some philosophical rambling, and both with accusations that this site is being manipulated. Our interest in how they set up this corrupt gig = manipulation. It reminds of another confrontation this site had with another Venezuelan 'entrepreneur', who leveled same accusations, but refused to answer pertinent questions.

It is now public, as per Duker's depo seen below, that Brennan was approached by Ruperti, with information obtained from Freedman, about Morillo's likely fraudulent dealings with PDVSA, involving Glencore, Trafigura, Vitol, etc., which BTW use corruption -without a shred of doubt- to generate business wherever they operate. While it is only reasonable to have great expectations as to the merits of the case -which hopefully DoJ will unveil, it is equally natural to question Brennan, Duker, Boies, Freedman and Ruperti's agreement. Ruperti's involvement is of special interest, for it gives this trust thing a stench impossible to avoid, and that's the likely reason Boies wants to keep everything under seal.

And a message to Ms Freedman: whatever wrong caused to your person can't be repaid by taking 66% of what belongs to 30 million Venezuelans.

None of it makes sense if Ruperti is removed from the picture. An investigator getting 22% of what's rightfully PDVSA's property doesn't make sense. A financier without a track record and completely alien to energy and / or PDVSA's businesses, getting 22%, doesn't make sense. Boies sharing his 22% with Pencu, who according to Duker cooked the whole thing with Brennan and Ruperti before approaching him to finance the litigation, only makes sense when we place Pencu in the picture as Ruperti's former legal counsel. Take Ruperti out and there's no Guerric Canonica filing a criminal complaint on PDVSA's behalf in Switzerland either. The whole thing reeks of Ruperti, and that ain't good, it doesn't pass the smell test. 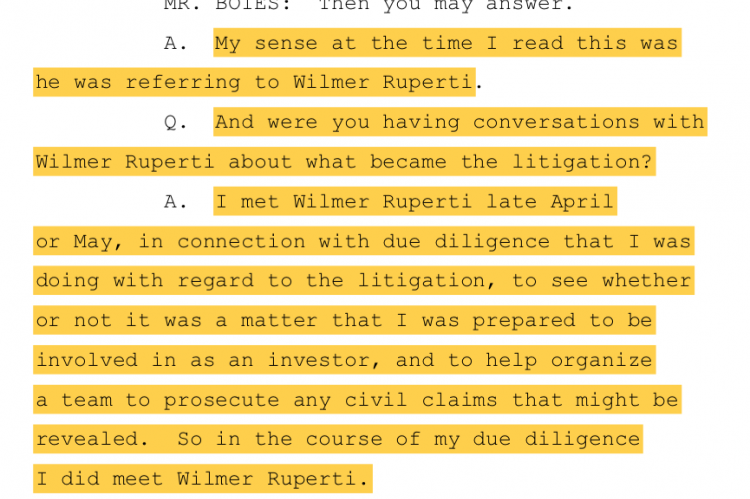