Helsinge Inc, a little venture controlled by Francisco Morillo, Leonardo Baquero and Daniel Lutz that managed to win almost every single PDVSA bid in which it participated, stands accused of having defrauded billions of dollars from PDVSA. It did so for many years, through a remarkably simple method: it gained real time access to PDVSA's bidding system, which allowed itself and its partners (Glencore, Trafigura, Vitol, Lukoil, etc.) to place winning bids at the very last minute. As a poker player put it to me the other day "no one wins every hand, no one's that good." But winning made Morillo et al very rich, so rich in fact that one of Helsinge's representatives in spot contracts with PDVSA was none other than Ricardo Ramos D'Agostino, son of life Secretary General of Accion Democratica party Henry Ramos Allup and wife Diana D'Agostino.

A spot contract leaked to this site describes Ricardo Ramos D'Agostino as Helsinge's "operation analyst". His phone number corresponds with those of Morillo's offices in Caracas. Along Ramos D'Agostino's name, Daniel Lutz (Product trader), and Jack Ryan (demurrage / contract / invoicing) also appear. Lutz appears to be Helsinge's number 3 person. Ryan was arrested in Geneva, in early March 2018 in connection to the scam. After the arrest, a Geneva prosecutor got Ryan's husband to FedEx a server containing years of evidence of Helsinge's fraudulent activities.

The spot contract is dated August 28th - 30th 2017, that is over one month after (now deceased) Nelson Martinez illegally ceded to a NY trust PDVSA's claim rights against Helsinge. Helsinge's case is hugely problematic, in that two competing lawsuits against it were presented in two jurisdictions:

- and a criminal case brought directly by PDVSA, acting through completely corrupt Swiss lawyers (Canonica) associated with none other than Wilmer Ruperti.

The Florida case is likely to be laughed out of court. The Geneva case however, has huge potential. To complicate matters even further, a legal expert hired by Helsinge and other defendants to prove illegality of Boies' trust is meant to be a key legal counsel of interim President Juan Guaidó.

Henry Ramos Allup is known to this site as the opposition leader that spread completely baseless and highly defamatory claims about me merely days after some thugs broke into my apartment and threatened my daughters in London. Ramos Allup was given the task by his brother in law, Francisco D'Agostino, in turn partner of Alejandro Betancourt of Derwick Associates' fame. Threats, break ins, illegal surveillance, impossible to sustain defamation and theft of laptops, isn't the only thing D'Agostino and Betancourt are involved in of course.

Sources report that D'Agostino / Derwick contracted security / surveillance / parapolice services to a company related to Peter Blatnik. When this site requested comments in that respect to D'Agostino, he replied saying that he had nothing to do with Derwick, Luxembourg's registry documents notwithstanding.

Years ago, Caracas sources believed to be connected to information posted on this site got their apartments and offices raided, by parapolice thugs hired by D'Agostino / Betancourt. Our own investigations, following break in, point directly at Derwick Associates, and their spin doctors Fusion GPS, as likely culprits. More recently, a journalist that asked what the relation between Helsinge and Ramos Allup's sons was, got assaulted and hit in the head -with a baseball bat.

Comment requests were put to Ramos Allup, wife and son. Only the latter hasn't blocked me on Twitter as yet.

For some reason, a lot of opposition folk want to keep from view the relationship between criminal elements, such as Morillo, D'Agostino and Betancourt, and a leadership that is readying a transition from Nicolas Maduro's regime. Ramos Allup sons work / have worked with Francisco Morillo and Francisco D'Agostino. Ramos Allup has no qualms in admitting that he enjoys travelling private in D'Agostino's jet. Completely corrupt boligarchs fund -to a not unconsiderable extent- most of the politicians in the opposition. Ramos Allup isn't, by any stretch, the only one who's tainted. Quite the contrary: nearly all of them enjoy similar perks from the Boliburgeoisie. 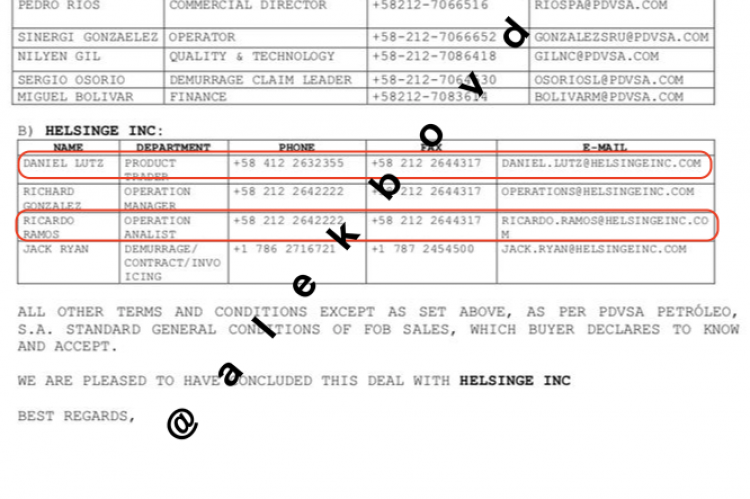