UPDATED 19/04/2021 - Early last December, the community managers / PR people retained by Alex Saab started directing targeted harassment against this site's editor on Twitter. In January, it got really aggressive. It may have to do with the fact that a Twitter account used to spread Saab's victimhood BS was shut down after we reported it. The way the harassment campaign works is dozens / hundreds Twitter accounts are created, with fake names and fake pictures. The next step is to manufacture a cacophony among members of this army of trolls: e.g. one account replies to one of our tweets, and then the rest either like / retweet, or add their own version. It's an ecosystem of trolls, amplifying each other's crap. Hashtags of my name, and variations, are used throughout. So we see a fairly "young" crowd of users, either male or female, having never commented on anything Venezuela related, simply because their accounts are a month or two old, from Hawaii, Wisconsin or Islington in London, suddenly trying to "counter" this site's investigations into Saab's criminal activities. No other Venezuela related issue gets their attention. The trolls don't comment on anything but on Alek Boyd's "past", which, according to their fabricated version, includes all manner of criminal activities. Alex Saab's demonstrable links to criminality aren't even mentioned.

Saab's trolls are too young to know that their predecessors fabricated the same arguments in the past. Alek Boyd allegedly stole 500kgs of cocaine from Mono Jojoy. Alek Boyd allegedly built submarines, to traffic drugs from Colombia to the US. Alek Boyd's mother, deceased 1983 in the Basque Country, was allegedly recruiting, organising and sending human drug mules to the US and Europe in 2006. Oh, Alek Boyd is allegedly a paedophile too. A police report from Spain was fabricated after my flat in London was broken into, and is being used widely, still, as "evidence". Alek Boyd has AIDS, and is allegedly spreading it "irresponsibly" in the streets of Caracas. Alek Boyd is allegedly a car thief, and an "extorsionist". Evidently, he is not very successful at the drug trafficking thing. A former Mayor of London, who cooked a propaganda for cash deal with Hugo Chavez, alleged that Alek Boyd was a "terrorist", and "banned him" from entering City Hall. Alek Boyd is allegedly a racist, and has advocated for the violent overthrow of chavismo in Venezuela, according to Calvin Tucker, a violent thug from East London whose deranged pieces used to be published in The Guardian.

Dozens of reports have been filed with Twitter, which comes back in 99% of the cases with the "we didn’t find a violation of our rules in the content you reported" template. We have provided reports about doxing, targeted harassment, manipulation of the platform, about repeated threats of violence, about prompts to self-harm, suicide... Almost nothing gets past Twitter's bots. The algorithm finds that is all well and good. However when other journalists start digging about Alex Saab's troll armies, Twitter then reacts and suspends 1,500 account:

Beginning in January, a small group of Nigerian influencers and human rights advocates received a Saab campaign briefing document produced on the letterhead of Digital Good Governance for Africa (DIGA).

DIGA is a UK nonprofit led by Naji Makarem, a professor of international development at University College London, and Christian Elemele, a Nigerian expat and social entrepreneur who previously studied at UCL. Founded in 2019, it is currently working on a project to bring digital voting to Nigeria for the country’s 2023 elections.

The document outlined a social media campaign that would recruit influencers in Nigeria, Ghana, and Senegal to tweet in support of Saab and help generate public outcry about his case. It said participating influencers were expected to post twice per week for the initial one-month campaign, from Jan. 18 to Feb. 18.

“The influencer is expected to use the hashtags #FreeAlexSaab and tag prominent Nigerians, Ghanians and Sengalese handles from government, business, celebrities, activists etc. which will be provided to the influencer,” the five-page document reads.

It instructed influencers to engage with replies to their posts about Saab and to tag the @wakandanomics Twitter account if they needed additional information. That account does not list a full name but used a photo of Elemele as its avatar. Elemele is also the cofounder of a nonprofit called Wakanda Social Enterprise.

Elemele and Makarem did not respond to multiple emails or to a detailed list of questions from BuzzFeed News. After BuzzFeed News reached out, Elemele’s photo was removed from the @wakandanomics account.

Nigerian influencers, taking cues from a UCL professor and his NGO in London, leading a Twitter propaganda campaign about a convicted criminal from Colombia... where else have we seen that sort of thing? In November 2014, right after break into my flat, theft of laptops and publication of photoshopped images of my children and family, a vicious online defamation campaign was launched. While some of the dirty work was done in Caracas, people hired in India, Spain and the UK also had roles according to our investigations. Francisco Convit, of Derwick Associates fame, was instrumental in the whole thing, and we heard, from none other than Saab's very own Caracas lawyer (Amir Nassar Tayupe), that Derwick had visited Saab to propose ways to silence this site's work and its editor.

Twitter is, of course, entitled to disregard reports into how their platform is constantly being manipulated for such purposes. When criminals like Saab are found to be engaged in such manipulation, it doesn't look good on Jack's freedom of speech snowflake philosophy. But this is not a freedom of speech issue anymore than when Twitter decided to shut Donald Trump's Twitter account. Saab, and his also convicted drug trafficker partner German Rubio Salas, have been instrumental in the destruction of Venezuela. Not of Venezuela's democracy, mind you, but the nation itself. These thugs are the ones that help keep Nicolas Maduro's dictatorial regime running. Millions of people have been forcibly displaced due to drug trafficking in Colombia. Millions of people have fled Venezuela, due to horrendous poverty and destitution, while Saab engages effing UCL professors.

Social media has a role to play in the defence of democracy and rule of law. We heard a string of pompous spiels by Jack and others, when their capital was under social unrest. When it happens elsewhere though, they do absolutely nothing, and that speaks volumes about their priorities and racism. U.S. Federal Agencies are an altogether different matter though. This site hopes that recipients of Saab's funds, whether PR or legal counsel, will be properly investigated.

UPDATE 19/04/2021: readers are encouraged to see The Dissident, the documentary on the assassination in Saudia Arabia's Consulate in Istanbul of Washington Post journalist Jamal Khashoggi. The role of Twitter, and how it is abused for all kinds of criminal activity, is well explained in the documentary, including how Twitter's own employees are involved in spying for Khashogi's slayer: Crown Prince Mohammad Bin Salman's. No surprise, therefore, in seeing how Saab is exploiting the platform for his own perverse objectives. 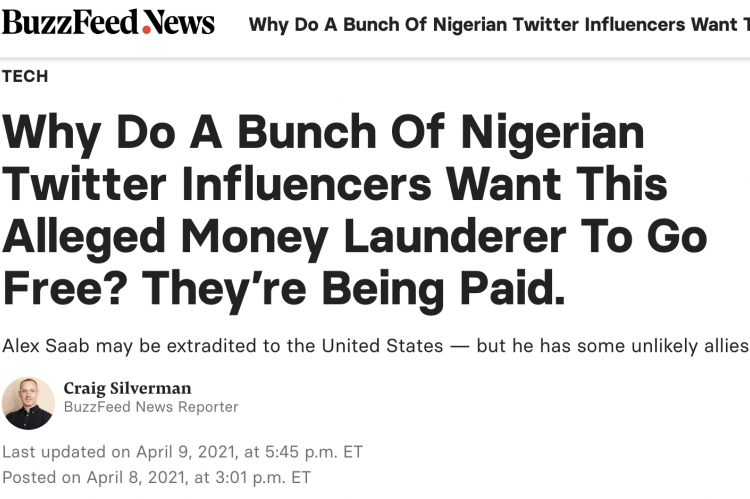