When it comes to the chavista universe of the phenomenally corrupt, Alex Saab has a special place. The seat of honor has his name tag. A Colombian, who didn’t have two pennies to rub together only a decade ago, lands in Venezuela with narcosenator Piedad Córdoba, and in the space of 5 years becomes Nicolas Maduro and Cilia Flores' most trusted consigliere. Saab has put the entire class of Venezuelan Boligarchs to shame. Venezuela is his turf. We don't see Maduro going to bat for say Alejandro Betancourt, as he does for Saab. The first procurement gig Saab got for construction of housing units, which this site reported in October 2013, meant that the bankrupted t-shirt dealer landed some $685 million worth of contracts without bid. But that was only the first, of many more to come. Maduro, particularly, seems to have hit it off with Saab in spectacular fashion. His canine loyalty towards Hugo Chavez thrusted him to front of queue in order of succession, and once in command after Chavez's untimely death, Maduro's fortune meant Saab's "business success" was guaranteed.

Right after housing contracts -deliverable some 50,000 units- Maduro got Saab into pole position as main supplier to Venezuela's subsidised food programme (CLAP). Hundreds of millions more were granted. Then, a foray into parallel black market turned Saab into one of its biggest players. And energy / oil, of course Venezuela's biggest and most lucrative sector, wasn’t going to be kept out of bound, as we exposed in early January 2016.

But a stench followed Saab, everywhere he went. This site revealed real identity of his long time associate German Enrique Rubio Salas, known in this iteration as Alvaro Pulido Vargas (real Pulido Vargas deceased 18 September 2005), who is a convicted drug trafficker and head of Bogota's Cartel. Colombia's El Tiempo reported in May 2000 that Rubio Salas, as well as other members of his cartel, had been arrested. Rubio Salas had a 15 year sentence pending in Italy, and was responsible for trafficking two tonnes of cocaine and 17 kgs of heroine within year prior to his arrest, according to El Tiempo, which added Rubio Salas had five different identities at time of arrest. Another publication from Colombia, Caracol, claims Rubio Salas also has a criminal record in Germany.

Such past would make anyone like Rubio Salas toxic beyond point of being able to ever establish a business again. Not to Saab though, or to his patron Maduro, and certainly not in chavista Venezuela. As our investigation revealed in 2013, Rubio Salas' sons were fronting for Saab in Ecuador and Peru, and Rubio Salas himself was the UBO (Malta shell) of Saab's entire housing-building operation (Fondo Global de Construcción).

The Drug Enforcement Administration (DEA) has been investigating Saab and his entourage since, at least, 2014. Connection to Rubio Salas must have surely played a part. Italy's extradition request for Rubio Salas, on basis of a 15-year sentence issued in a Milan Appeals Tribunal on 10 April 1997, might have also helped. Saab's open amity with narcosenator Córdoba, considering the latter's services rendered to FARC, dispels all doubts as to the kind of connections that underpin his operations. There's criminality all around Saab, just too much to be plausibly dismissed. Evidence of this is the fact that Saab's U.S. visa got revoked very many years before even setting foot in Venezuela.

Eventually, the U.S. Department of Justice (DoJ) caught up with Saab. Of the $685 million he got to build houses, some $350 million were laundered using U.S. banks and U.S. stream of commerce. On June 12 last year, he got arrested in Cape Verde, from where he has been fighting extradition ever since. When Saab was arrested, he was not carrying a diplomatic passport. On June 1 however, Maduro's regime had announced that Venezuela would take (to the International Criminal Court) the bankruptcy case of Libre Abordo, a Saab-controlled Mexican-shell set up to evade U.S. Treasury sanctions on PDVSA. So integral had he become to Maduro's survival, that when Rosneft allegedly exited Venezuela's energy trading sector upon being sanctioned by Treasury, Saab was called upon to replace Rosneft, despite having no track record whatsoever in oil. Saab had all the access. Logistics? That's where Francisco D'Agostino and Alessandro Bazzoni slotted in, as we revealed here. Their Elemento and Swiss Oil shells started running trading, shipping, banking and everything else in between, to take to market on Saab's behalf millions of barrels of PDVSA crude.

Upon Saab's arrest, the Maduro regime informed the world that the Colombian was no longer so: he was now not only a Venezuelan citizen, but a diplomat. Our research found that cartel boss cum partner of Saab also got Venezuelan citizenship. This site had already received information that Saab had been travelling as part of Maduro's entourage, but never on his own as a Presidential Special Envoy. As U.S. law enforcement closed in, Maduro and his allies scrambled to create diplomatic immunity, retroactively, so the Colombian thug wouldn’t end up dressed in orange, revealing compromising intel. It's been frantic since last June, "heavy hitters" like disgraced Spanish judge Baltazar Garzon -who is forbidden from practising law in his own country- and Baker Hostetler, have been retained to defend Saab.

But who needs lawyers, when there's Swiss Public Prosecution and FINMA?

Early this week, the excellent folks from Gotham City reported that Geneva Prosecutor Endri Gega decided to shut down a criminal probe into Saab and Rubio Salas' money laundering and corruption that started in 2018. On the back of four separate Mutual Legal Assistance Treaty (MLAT) requests filed by DoJ, Swiss prosecutors had opened an investigation. Precise bank account details were provided by DoJ. Gotham City reported that no less than 22 accounts at UBS were part of the probe. Furthermore, DoJ identified a number of Panamanian shells used by Saab and Rubio Salas (Domar Trading SA, CA Penapolis SA, Driade SA, Vilex Trading Inc, Bolcos Universal Corp) and a Swiss one (Swissxer SA), were connected, as per Gotham City's reporting, to a scheme to launder $126 million. Endri Gega reasoned that, since funds had only moved between accounts in Switzerland and insufficient evidence was provided, there was no legal basis to prosecute Saab and Rubio Salas and therefore the probe had to be shut, as Gotham City reported.

Other sources consulted by this site confirmed that FINMA, Switzerland's financial watchdog, is not investigating Saab's associate Alessandro Bazzoni, recently revealed by this site as a Swiss banker in his own right (MBaer Merchant Bank). Treasury designated Bazzoni is not on Swiss prosecutors' radar either, as per our sources. Then, there's Jorge Guillermo Wurms Forero, who heads Penates, a "family office" that has all the markings of being Saab's Swiss money laundering shop. Another associate of Saab, Jean Paul Rivas, runs another Swiss "asset management" company called Sumus Capital.

Long gone are the days when Saab and Rubio Salas needed dodgy little banks in Antigua to run stuff. They have Switzerland, its banks, family offices, wealth managers, prosecutors like Endri Gega and regulators, all pulling the same way. What Gega's absurd ruling says is that Switzerland remains open to convicted drug traffickers and its fantastically corrupt criminal associates, so long as black money is moved within the confines of Swiss jurisdiction and permanent residences aren't established. For let it not be forgotten: Rubio Salas was convicted in Italy on drug trafficking charges, but so is Saab, also in Italy, on money laundering charges related to the very same MLAT requests dismissed by Gega.

Gega's nod to UBS did not go amiss: money laundering continues to be quintessentially Swiss, for this is not the first we've heard about Swiss banks going the "extra mile". Compagnie Bancaire Helvetique intermediated for Saab, as reported by Gotham City. Julius Baer too. We then have newcomers, like RuVe Beratung & Treuhand AG, charging a hefty 8% on deposits to provide fiduciary services and using a Saab favourite: Treasury designated EvroFinance Mosnarbank, half owned by FONDEN. Separate investigations conducted by this site found that Cilia Flores' niece got hundreds of millions worth of construction contracts, subcontracted subsequently to Saab, who then dispatched staff to Moskow to open accounts at EvroFinance Mosnarbank, so all payments would be internal. Like in UBS, FONDEN would make transfers to Saab within EvroFinance Mosnarbank. RuVe's managing director Jan-Hendrik Rottmann happily takes rubles originating from EvroFinance Mosnarbank, and we are certain he is not alone with Michael Bär in disregarding sanctions, criminal pasts, relevant AML legislation and taking illicitly obtained funds. 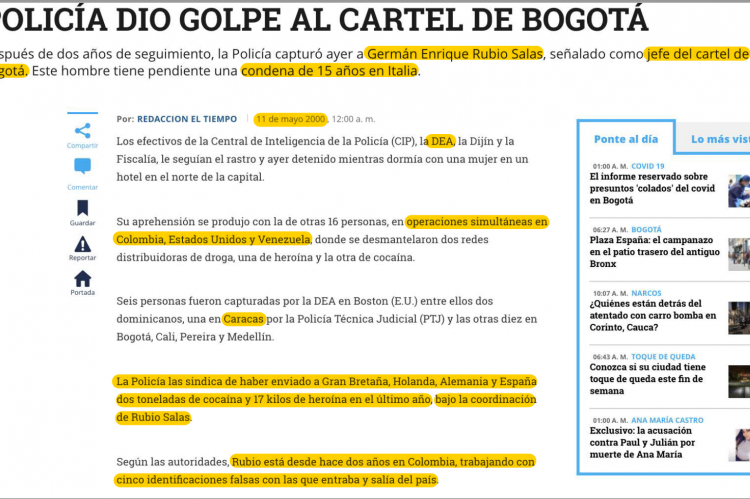