Does Alex Saab have a family office (Penates) in Switzerland?

Recent news from Gotham City revealed that Compagnie Bancaire Helvetique (CBH) had intermediated for Alex Saab in some completely corrupt Venezuela-related business. Unsurprising, considering players. In June 2020, sources informed this site that Colombian - Swiss citizen Jorge Guillermo Wurms Forero was Alex Saab's proxy. Wurms' links to Saab were corroborated in September 2020, thanks to FinCENFiles leak. Law enforcement following Saab's moves relayed to this site a while ago that Saab used to use an extremely rare credit card. This is where the connection to Wurms turns bizarre.

There is this Swiss company called Rosan Diamond. It is now owned by Insignia, a UK ifestyle company that offers concierge services to the 1%. Rosan Diamond argually makes the world's most exclusive and expensive credit cards. Rosan Diamond only has five partners worldwide: three in Russia (Cardsmobile, B & N Exclusive, VTB), one in Kazakhstan (ATF Bank), one in Switzerland (Penates Family Office and Financial Services), and one in Panama (Penates again).

Do check the website. It is the stuff of the wettest dreams, presumably, to those "businessmen" befriended by Putin, Nazarbayev, and of course Maduro. It is quite probable we would have given a miss to diamond-encrusted, $50,000 credit cards used by thugs with short dick syndrome, but then again, what about Rosan Diamond's partner for Latin America?

Penates AG, as it turns out, is a "family office" located at Bahnhofstrasse 20, in Zug, Switzerland. Records show that Penates' manager is Jorge Guillermo Wurms, a fact corroborated by Wurms' own LinkedIn page (under alias Jorge W). Wurms claims to be CEO of Penates since Oct. 2014.

What are the chances of the world's only purveyor of such cards to establish a partnership with an agent of Alex Saab? How about that "family office" in Zug?

Wurms hails from Credit Suisse, UBS and AndBank. Sources familiar with his activities claim Wurms and Stephan Kaeppeli ran similar "high net worth" type of operations in Panama, such as offering residency to Colombian clients looking to stash money away. Both worked for Credit Suisse. Wurms maintains a footprint in Panama thru his brother, however brokerage licenses for both are expired. Allegedly, Wurms came into Saab's universe to replace Banco Santander's Guillermo Montefusco, when he stopped advising Maduro's favourite business partner. Sources report that Wurms then moved some of Saab's assets to Dubai.

This site could well have the largest catalogue of examples of Venezuelan criminals' using undeclared interests in banks and financial institutions to launder vast amounts in Switzerland. We broke the story about Betancourt and Convit's stake in Credinvest. Ditto Diazgranados' stake in Compagnie Bancaire Helvetique, for all practical puposes a money laundering concern. Do recall that another associate of Saab (Jean Paul Rivas) tried (according to Francisco Morillo) to negotiate a mega deal with Trafigura (Trenaco).

The trick of keeping stakes in Swiss banks under 5% -to avoid having to declare it to financial watchdog- apparently has become vox populi among the Boliburgeoisie. We are told Treasury-designated, and Saab associate Alessandro Bazzoni is but the latest exhibit.

It is not a secret that Saab is Maduro's money man, and that chavismo is doing everything within its power to prevent Saab from spilling the secrets to American justice. It is a very well established fact that Switzerland is THE destination of choice for entrepreneurs involved in nation-bankrupting corruption. Everyone knows money laundering is the pilar of Switzerland’s official economic policy, the core of its financial industry, though it is getting beyond the realm of brazenness. The perfect measure is prosecutors saying, in the same breath, that $10 billion worth of PDVSA funds have been laundered in Switzerland by Raul Gorrin, Alejandro Andrade, and the Oberto brothers, but no criminal charges will be brought against bank / bankers involved. Any forensic accounting applied to "family offices" like that of Wurms would only show that internationally accepted AML and KYC rules just don't apply to Switzerland. 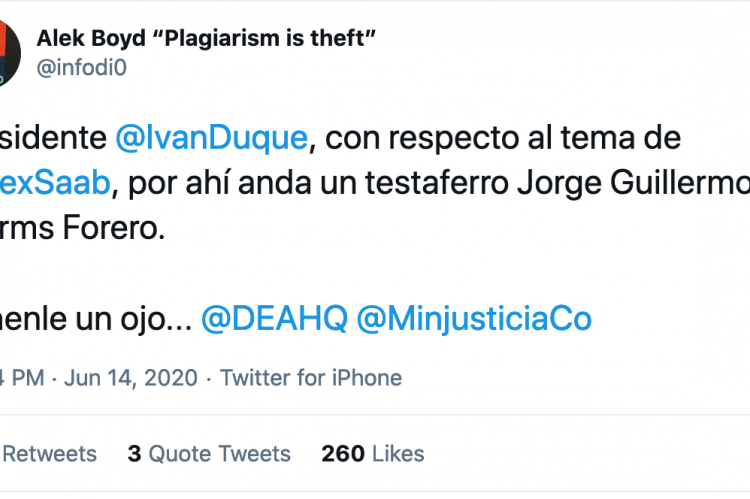