This site has been investigating Colombian 'entrepreneur' Alex Saab since mid 2013. Back then, this thug wasn't a Venezuelan citizen, nor a Venezuelan diplomat, but a heavily-indebted small business owner from Barranquilla, leeching on chavismo's never ending corruption. Disgraced narco-senator Piedad Cordoba walked Saab into Nicolás Maduro's office once upon a time, when Maduro's was Hugo Chavez's foreign secretary, and the rest is history. Saab would become Maduro's most trusted operative in all sorts of deals. It is unclear just why Maduro decided to trust Saab to such an extent, however since establishment of partnership Saab turned into the go-to guy to deal with Maduro businesswise. The U.S. Department of Justice (DoJ) charged Saab with money laundering, and placed him in fugitive status for his connection to procurement for the construction of social housing for the chavista regime. This corruption took place over six years before Saab was "appointed" as "Special Envoy" on 9 April 2018. Saab was arrested in Cape Verde, en route to Iran as Maduro's "agent" in June 2020. Now the imbeciles from Baker & Hostetler are challenging DoJ's criminal charges against Saab (case 1:19-cr-20450-RNS) on the back of a diplomatic status he got many years AFTER, that is, in true chavista style, Baker & Hostetler's finest want the diplomatic protections enshrined in the Vienna Convention to be applied to Saab retroactively.

Baker & Hostetler is the sort of law firm that gets retained to do the dirty work for Russian thugs, so it is completely unsurprising that Saab would retain the firm. What is difficult to understand is how such an idiotic argument could be filed. The issue at hand is not whether diplomats -however criminal acts in the execution of their State's international policies may be- can enjoy immunity under the Vienna Convention, but rather whether crimes perpetrated before Vienna Convention diplomatic guarantees apply could be ignored / dismissed by courts.

As per Saab's alleged official appointments, taking anything coming from chavismo is fraught with risk. Maduro & co had Saab's Venezuelan citizenship and diplomatic status well guarded, and it was revealed only after his arrest -on a Colombian arrest warrant- in Cape Verde. After the arrest, Maduro's regime has been scrambling to produce evidence of Saab's "diplomatic status". So much so, that Saab's official appointment to some African organization took place in late December 2020, good six months after his arrest. Just like Baker & Hostetler, chavismo wants Cape Verde to extend diplomatic immunity to Saab retroactively.

Saab's first major procurement contract in Venezuela ($685 million) was granted in late November 2011. Hence, six years and five months before becoming a chavista "diplomat", Saab was already ear-deep in multi million dollar corruption. Another fixture in Saab's "business career" before diplomacy has been his partnership with Alvaro Pulido Vargas (real name German Enrique Rubio Salas). We have known that Pulido Vargas was a fake identity of Rubio since first exposé of Saab in late October 2013. Rubio was, in fact, deported from the U.S. on drug trafficking charges. Saab had his U.S. visa revoked from his Colombian passport much before even setting foot in Venezuela. But none of this will make it into Baker & Hostetler's preposterous filings.

Furthermore, Given Saab's connections, partnerships, activities and source of wealth, federal agencies, as well as DoJ, should be pondering whether Baker & Hostetler are in compliance with current AML guidelines. Even the worst scum have a right to have legal representation, however the source of funds to pay for such cannot be illicit proceeds. Saab's wealth, all of which originated in Venezuela since becoming Maduro's homeboy, is the product of illicit activities. Therefore, legitimacy of funds to pay legal counsel in the U.S. has got to be determined.

In addition to DoJ's criminal charges, Saab is also a U.S. Treasury-designated individual. His Mexican Libre Abordo "enterprise" was found to be violating U.S. sanctions on PDVSA, and subsequently declared itself bankrupt. Taking a page out of Baker & Hostetler's bible of legal principles, chavismo reacted by saying it would take Libre Abordo's bankruptcy case to the International Criminal Court, yet another entirely deranged attempt at shielding Saab from criminal responsibility.

Saab is wanted by law enforcement in his native Colombia, in Italy, and in the U.S., however his counsel is only taking issue with DoJ, in Florida, in relation to the construction procurement case. Saab has been a person of interest for the Drug Enforcement Administration since 2014. Saab's involvement in foodstuff imports is also the focus of other international criminal probes involving Swiss law enforcement. 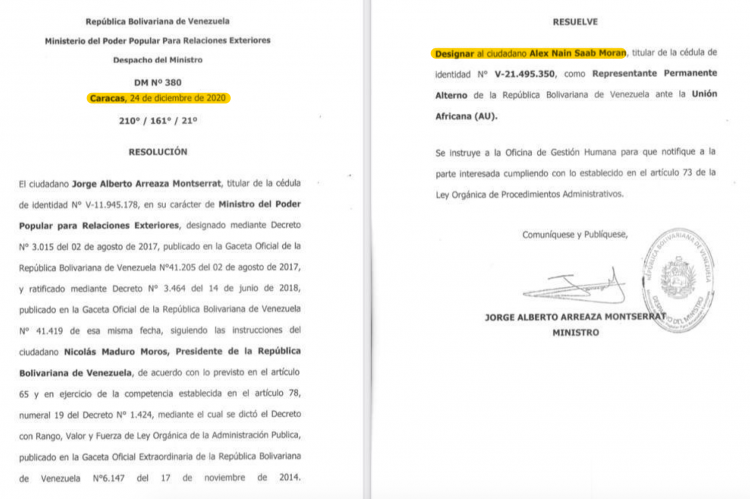