Yesterday, Treasury sanctioned Alex Saab, while a DoJ's Grand Jury in South Florida indicted him and partner-in-crime Alvaro Pulido Vargas a/k/a German Rubio (see indictment below). This site took an interest in Alex Saab back in July 2013. I recall having been in touch with Ecuadorian journalist Gabriela Quiroz in the course of my research. At the time, Saab was involved in a multimillion-dollar racket with SUCRE, a regional currency exchange mechanism set up by Hugo Chavez and his socialist allies. Ecuadorian authorities had seized $59 million, as part of a probe into a $159 million corruption scheme, involving Fondo Global de Construcción, one of Saab's shells in Ecuador.

There was no Armando.info neither its "persecuted journalists" back then. Saab was just a parvenu opportunist, associated with narco Senator Piedad Córdoba, with Alvaro Pulido Vargas a/k/a German Rubio, with Nicolás Maduro, that had, somewhat, passed all due diligence filters of Venezuelan and Colombian governments, and had signed, let us never forget in the presence of Juan Manuel Santos, Maria Angela Holguin, Hugo Chavez and Nicolas Maduro, procurement contracts in excess of $500 million. That's the reason why we took an interest, for this was a bolichico -in the mold of Derwick Associates, a Colombian one at that, involved in gargantuan theft of public funds. I remember thinking "WTF is this thug doing in Venezuela?" I spent days searching archives to find the video above, where Saab made his "grand entrance", only four days after having registered his Fondo Global de Construcción shell in Colombia.

Saab took a dim view of this site's exposing his "business". He reached out, answered phone calls, even proposed a meeting in Paris. When I replied saying I would see him in London instead, he sent one of his associated thugs, Amir Nassar Tayupe, all the way from Caracas to meet, and threaten, me. The meeting with Nassar Tayupe was a surreal experience for sure: the lieutenant that carries the capo's orders, the phone call back to the boss to sort of prove that meeting is taking place -by putting me on the phone, the offers of trips to Caracas -all expenses paid- to "demonstrate to you that we are a serious company"...

Saab didn't know, of course, but this site had very good sources: in Ricardo Molina's office, within his organization, in Ecuador, in Colombia, even his (former?) wife was contributing with intel. And Nassar Tayupe, and another of Saab's lawyers, Abelardo de la Espriella*, were a fountain of information. Something that I should have paid heed to, and didn't: Nassar Tayupe said to me that Derwick Associates thugs had proposed to Saab to form an alliance, to silence me. Then he sued me in Caracas. Perhaps that set the stage for the very real break into my flat in London, theft of laptops, illegal surveillance, defamation campaign and threats of sexual abuse against my children that followed.

Already in 2013 Saab was running a vast web of corruption, at the highest levels, in the Andean region. In Ecuador, he had Jaime Francisco Sánchez Yánez, brother of one of his Caracas employees, as personal advisor to Rafael Correa. In Caracas he had William Amaro, bagman of Nicolas Maduro. In Colombia, he had narco senator Piedad Córdoba and other narco-funded politicos, like Gustavo Petro. This, and not Venezuelan corruption, is the reason why Saab and his associates have been under the watchful eye of the DEA. For years.

When the scandal in Ecuador thrust Saab into view, he had nothing to fear of course. Galo Chiriboga, former Attorney General from Ecuador, got his marching orders from up top. When Fanny Kertzman and I tried to publish about Saab's rampant corruption in Colombia's Revista Semana, de la Espriella sent its editors absurd and totally baseless allegations against me, of being "on the run" from "Venezuelan justice." No authority in the government of narcoterrorists' friend Santos questioned Saab, nor his relation with Córdoba and Petro. Ever.

But we kept getting intel on Saab. He "had" banks in Dominica. He was flying the narcosenator all over the place. He was in yatchs, surrounded by prostitutes and "living the life". His (stranged?) wife vacationed in a mansion in Paris. One of his sons was to become a Hollywood actor, and was burning money like there's no tomorrow in L.A. Same with German Rubio a/k/a Alvaro Pulido Vargas, and his sons, all associates in Saab's cartel.

And then there was his venture into oil, with TRENACO. Again, way before Reuters would produce one of its "exclusives", this site exposed what could've been the largest ever single contract granted to a shell company by PDVSA. Our sources informed that Saab's stench was such, that not even Trafigura wanted to touch him. Imagine, rejected by the likes of Trafigura...

Saab is just the last in a growing list of "businessmen" exposed in this site over the years that end up indicted, charged, sanctioned, or arrested. "Businessmen" that only flourish in Venezuela, that become overnight billionaires in a country whose economy has contracted to levels only seen in war zones. "Businessmen" that are into food stuff, housing, gold, debt, FX and energy sectors, "successfull" in all of them. Jeff Bezos has nothing on Venezuelan chavista "entrepreneurs". This site has a stellar and unparalleled track record (within Venezuelan investigative journalism context) exposing this class of thugs. As a friend of the site said the other day re Saab "I'm really not blowing smoke when I say, everytime I read one of those stories, I'm amazed how so, so far ahead on this you have been..."

The ones exposed here are the main culprits of a crisis that was there for all to see, many years before getting to humanitarian status. It is people like Saab, and theft of hundreds of millions of dollars facilitated by chavistas, the real cause of Venezuela's economy's obliteration, which brought hunger, which caused LatAm's largest ever exodus. Sanctimonious imbeciles like Tom Shannon, or Francisco Rodriguez, are trying to shift the blame to sanctions, but this site saw and documented before anybody else, where unbridled corruption was pushing Venezuela. Saab's just a poster boy.

So now, that his totally corrupt cartel has been exposed, this site would like to ask what will "friend of the U.S." Ivan Duque do? When will Colombia issue red alerts to INTERPOL to have Saab and his criminal associates arrested? What, if anything, have Santos and Holguin to say re Saab, specifically regarding dereliction of most basic common sense and duty, when they sat there signing multimillion dollar contracts with such a thug? That Colombia is having to deal with over 1.3 million exiled Venezuelans is caused, in no small part, by Santos's very own flippancy in dealing with the likes of Saab.

It remains a certainty that Maduro's regime isn't going to touch one of its favourite Boligarchs. Colombia's Duque, however, has a lot to do in this respect. Let's just see whether he walks the talk... 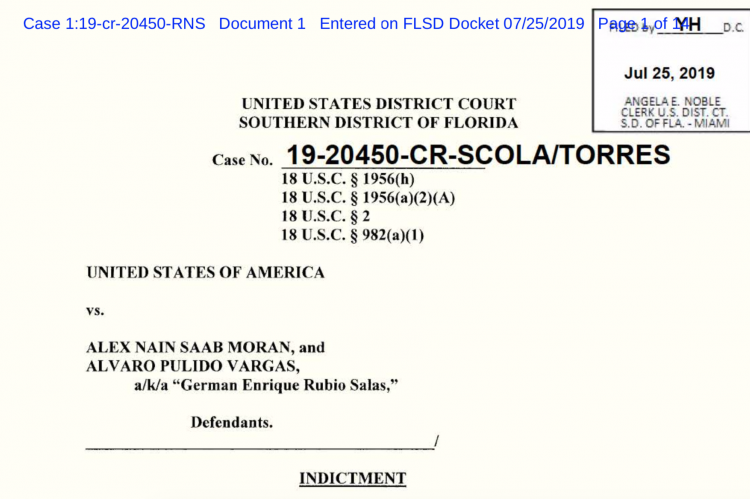