Further to corrupt saga behind PDVSA US Litigation Trust, there is another action that has gone almost unnoticed: a Swiss criminal probe into the affair. A separate civil lawsuit in Florida (Sargeant, III v. Maroil Trading Inc et al - 9:17-cv-81070) provides some clues as to who is calling the shots in Switzerland, and further exposes David Boies' dodgy enterprise.

PACER has Alexander Pencu, from Meister Seelig & Fein LLP, as Lead Attorney for defendant Maroil Trading Inc. Who is Maroil Trading Inc? Wilmer Ruperti. Pencu's counsel was retained by Ruperti for both corporate and individual defence.

From court filings in Sargeant, III v. Maroil, we learn of a criminal complaint in Switzerland, filed by Guerric Canonica, on behalf of Maroil (Ruperti) against Clyde & Co and Latin American Investments Limited.

Canonica's conflict is inescapable. On the one hand he is acting for PDVSA, in criminal proceedings for fraud brought against Helsinge, Trafigura, Glencore et al. On the other, he is acting for Ruperti, who has a stellar track record defrauding PDVSA. Canonica (Ruperti) challenged Clyde & Co's actions to freeze some $49 million that Ruperti got from PDVSA, through corrupt payment settlement.

Canonica has a distinguished pedigree: his father, Dante Canonica, has been exposed, along Arturo Fasana, as proxy of King Juan Carlos, the Koplowitzs and Alberto Cortina. Koplowitz and Cortina are well known to readers of this site, as partners of Derwick Associates. Fasana also worked for Ramon Blanco Balin (proxy of Alejandro Betancourt). Blanco is believed to be the orchestrator-in-chief behind one of Spain's most notorious corruption scandals (Gürtel). Canonica Jr is also cited as Fasana's lawyer. It doesn't end there though: Dante, Guerric, and Arturo were partners, Dante's son and Arturo's son were also partners.

What else can be found in that oasis of money laundering and corruption in the shores of Lake Geneva? The Swiss prosecutor in charge of the PDVSA probe, Johan Droz, is partner of Franćois Canonica, uncle of Guerric, brother of Dante... But that's not all, going back into internet archives from 2009, we find that Johan Droz used to work with Dante, and with Guerric, at François' law firm... No wonder Droz refuses to reply my requests for comment. Incestuous profligacy doesn't even beging to describe this lot of thugs. There isn't a single honest broker in this entire affair.

Safe to say then, that Guerric Canonica is the perfect fit for Wilmer Ruperti. Like David Boies and Bill Duker. Yesterday's post about waivers given by Nelson Martinez to Boies just might have been suggested by the Canonicas, who find no conflict in getting into bed with the corrupt, while playing for all sides. 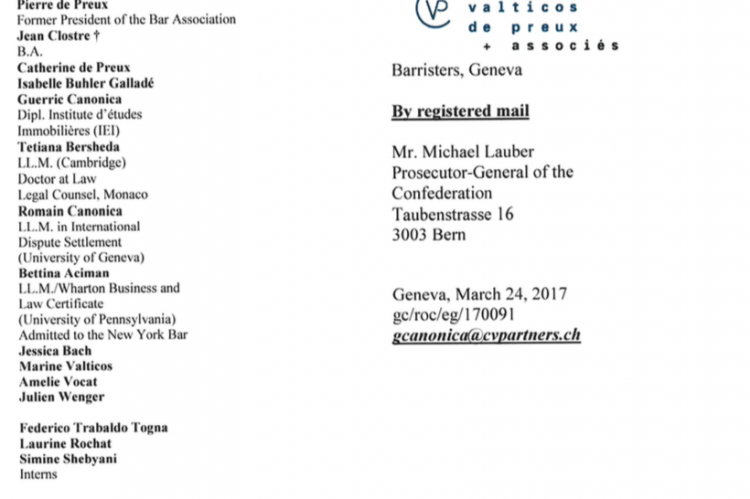