#ConMiCorruptoNoTeMetas is undoubtedly one of the most accurate ways to describe politics in Venezuela, a criollo "some corrupt thugs are more equal than others" version. The hashtag was coined by Daniel Lara Farias, a former Acción Democrática (AD) party member, who was assaulted with a baseball bat for exposing in his radio program the sons of Henry Ramos Allup (AD's eternal leader). Ramos Allup's offsprings, it turned out, worked in Helsinge for Francisco Morillo. Yesterday, Treasury announced sanctions against a number of Venezuelan Comgressmen that had seized control. This group of Congressmen were stooges following whatever orders Alex Saab was giving. Saab is another sanctioned party and Department of Justice's fugitive to boot. Saab is also one of the very few boligarchs with unimpeded access to Nicolas Maduro (even though he is Colombian), and is, in short, a Cilia / Maduro proxy in all kinds of corrupt business.

Venezuelans are meant to rejoice Treasury's new measure. Sec. Pompeo reiterated "the United States’ continued commitment to the Venezuelan people in their struggle to restore democracy and prosperity to Venezuela."

Vis-a-vis Venezuela, Pompeo, State Department, Treasury and the Trump administration at large are in an impossible situation. Saab is a sanctioned and indicted fugitive, yet he remains a free man, moving around Venezuela / Colombia and -until very recently Europe- unimpeded, acting for Maduro and Cilia where needed. Saab is just one example of how utterly effed up Venezuelan politics are. Alas he is, by no means, the exception.

The Washington Post came recently with exposes about mettings between Derwick's Alejandro Betancourt and Rudy Giuliani in Madrid. Betancourt is another boligarch who, like Saab, mingles with absolute ease with the top leadership of Venezuelan opposition. Betancourt entertains and fetes Gustavo Guaido, whose brother has promised full amnesty to Betancourt in exchange for financial support according to sources. Betancourt is a co-conspirator in two separate money laundering schemes set up in PDVSA worth $5.7 billion. Betancourt's partner Francisco Convit is a DoJ wanted fugitive. Betancourt and Convit have associates connected to Russia and its intelligence service FSB.

The same can be said about Raul Gorrin, also sanctioned and wanted. Furthermore, Gorrin is also involved with Convit and Betancourt in one of the corrupt schemes mentioned (Operation Money Flight). Like Saab, Convit and Betancourt, Gorrin is a key piece in "negotiations" between Leopoldo Lopez (Guaido's boss and State Department "favourite") and chavismo. The farce announced by Guaido and Lopez last April was the result of "negotiations" between Gorrin, Maikel Moreno, Venezuelan military, intelligence and chavismo.

Sanctioning Saab's proxies, while ignoring Guaido's and Lopez's connections to equally corrupt boligarchs, is the very reason why the Trump's administration Venezuela policy is doomed. Those Congressmen controlled by Saab, became famous for their involvement in exonerating Saab from probes into his corruption, that is for giving amnesty.

But Guaido was once Head of a Congress Commission tasked to tackle corruption and did the exact same thing, i.e. amnestied / exonerated Mauro Libi, yet another hugely corrupt boligarch. Freddy Guevara, Voluntad Popular party leader and first Head of that Congress Commission, DID THE EXACT SAME THING.

So if Congressmen connected to Saab deserve sanctions, so does Guaido, so does Guevara, so does Lopez, so does Borges, so does Vecchio, so does Ramos Allup, so does Rosales, so does Capriles Radonski... for consistency's sake. In the leadership of the "opposition" in Venezuela there isn't a single politician that has not been touched by corruption. NOT ONE.

The session that "re-elected" Guaido was celebrated in El Nacional, a rag controlled by Danilo Diazgranados and Carlos Gill, among others. Diazgranados is involved in the same gargantuan corruption with Betancourt, Convit and the Oberto brothers. On his part, Gill is involved in similar corruption with Adrian Velazquez, Claudia Diaz Guillen and, ultimately, Alejandro Andrade. Gill's wife is a member of Carlos Vecchio's circle. The wife of another hugely corrupt operator (Moris Beracha, partner of Diazgranados) is also part of Vecchio's entourage of "advisors". When Guaido went to Colombia, he not only hugged Luisa Ortega Diaz, he was also hanging with Pedrito Torres Picón... The collusion with the corrupt it's endless.

From the head of the Voluntad Popular snake down, no one's clean, no one can say "I never took money, favours, plane rides, in kind, stipends, weekends in Los Roques or in a yatch somewhere." Ditto Acción Democrática, Primero Justicia and Un Nuevo Tiempo leadership. We now know that lobbying for Saab was not limited only to Venezuelan Congress. Have "good folks", like Guaido, Borges, Lopez, Vecchio and co, made any efforts in assisting the Trump administration in locating the wanted thugs that support them financially? Have they given any intel to relevant U.S. authorities? Is the State dept. demanding such intel from them? Have they volunteered anything in that regard? Has Vecchio given State, Justice or Treasury any information regarding whereabouts and activities of Gorrin, Convit and Betancourt?

What Treasury is saying here is #ConMiCorruptoNoTeMetas. How can Gorrin, Saab, and Convit be sanctioned / indicted, while Betancourt is entertaining Trump's lawyer in Madrid? How come Diazgranados mingle with Scaramucci, and Gill and Beracha are free? How about Rafael Ramirez, the architect of it all, or his sidekicks Baldo Sanso, the Neri Bonillas, Beatrice Sanso, Hildegard Rondon de Sanso? How about "bankers", like Victor Vargas and Juan Carlos Escotet, that facilitated all of it? 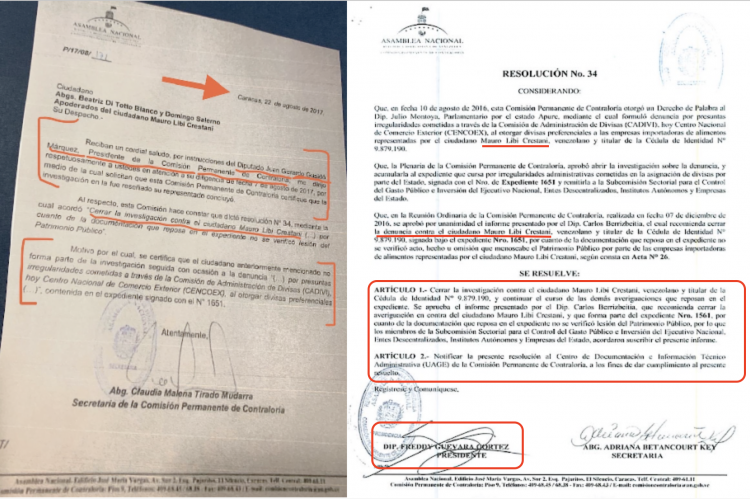