Arrested in Cape Verde on INTERPOL notice, Alex Saab will slip back to Caracas

There's been frantic commentary over the weekend due to arrest last Friday of Alex Saab (Nicolas Maduro's favourite operator) in Cape Verde. Colombia moved last week against Saab, seizing and freezing some of his assets and placing him on INTERPOL's blue notice list. But this is Cape Verde, and Alex Saab, so alleged expedite extradition to face U.S. Department of Justice (DoJ) charges was never going to be a straighforward affair. As of this writing, Saab is still in Cape Verde, not going anywhere in a hurry. It is our belief that Saab will be let go, eventually, back to Caracas. There's precedent.

Best proof yet of #Venezuela being a narcostate: #AlexSaab, a Colombian citizen associated with drug cartels, not only has Venezuelan citizenship, but diplomatic status... pic.twitter.com/C0Y1EPAtDm

In July 2014, a nowhere near as critical chavista also travelling on a diplomatic passport was arrested in Aruba (Hugo Carvajal). After some maneuvering, the Netherlands caved and Carvajal was sent back to a hero's welcome in Caracas. Carvajal was arrested again in April 2019, in Madrid, on same pending drug trafficking charges. Carvajal was released under a program to report to Spanish authorities regularly, but then he slipped to Lisbon aided by chavista diplomats. He is still on the run, his whereabouts "unknown".

Cape Verde is a desperately poor African country, ergo desperately corrupt, the kind of jurisdiction where small-fry-compared-to-Saab Isabel dos Santos laundered some of "her wealth" with official assistance. Its GDP is just shy of $2 billion. Alex Saab has more than that. Easily. He could just bribe the entire government and take his leave.

Saab's arrest also presents a phenomenal opportunity for America's foes to pile on the embarrassment, like Iran did recently, not because the man is particularly relevant in global geopolitics, but because his partner in crime is Nicolas Maduro.

Iran can be discounted, as its specific diplomatic weight isn't there. Putin, however, must have such glee right now. Expect Lavrov and that insufferable Zakharova to defend Saab's human rights, and call for Cape Verde's sovereignty, rule of law / due process to be respected, and other such BS. Erdogan won't be that vocipherous, but he'll maneuver nonetheless. Turkey's new found trade success with Venezuela is owed, in no small part, to Saab's "diplomatic" work. Cuba has kept good relations with Cape Verde and its diplomatic corp still has a lot of pull.

Then, the European Union countries do not stand in unanimous opposition to Maduro. While its relationship with Cape Verde could be leveraged, nobody is going to in the middle of reactivating battered economies due to the Chinese virus. China itself might take Maduro's side, out of spite.

Can I just state the obvious? Considering rackets he’s been involved, #AlexSaab should’ve been dispatched to a black site the minute after his arrest.

As it is, @nicolasmaduro|s man isn’t going set foot in a supermax just yet.

Among the cacophony about his arrest, there's a dearth of real reporting into his past, associates, operations, who else was arrested, etc. Saab's latest transition into Venezuela's largest crude trader has gone completely unnoticed. It is therefore our view, that after some purposefully slow administrative process Saab will be released to his partners, not to feds or DoJ. He'll go the Carvajal way, or the Walid Makled* way. Like Carvajal, Saab has multiple passports and nationalities. The known ones -under his real name- are Colombian, Venezuelan, Antiguan and Italian. Any narcoterrorist of that stature worth its salt, however, has a pile of different identities.

We are living the decline of America as a superpower, accustomed to getting its way everywhere. Those days are long gone, and what's left is the world's thugs running circles around the sheer discombobulation brought about by Donald Trump, whose senior officials are tight lipped on the affair. This site knows for a fact that Saab and his closest associates have been persons of interest to DEA since, at least, June 2014. If we know this, imagine what Colombia's authorities must know. Yet, even in Colombia, his country of birth, Saab has been going about his business without the slightest concern till last week.

Saab is a critical piece in the chavista criminal organisation. When his Libre Abordo shell declared bankruptcy recently, Venezuela announced it would take his case to the International Criminal Court. With the arrest in Cape Verde, Venezuela doubled down, admitting for the first time that Saab is in fact a Venezuelan citizen, conducting diplomatic business on behalf of Venezuela. Saab and Maduro share more than just business: they are, after all, two Colombian compatriots running Venezuela.

*Walid Makled is a Venezuelan drug trafficker that was arrested in Colombia and handed over to Venezuela despite America's extradition requests. 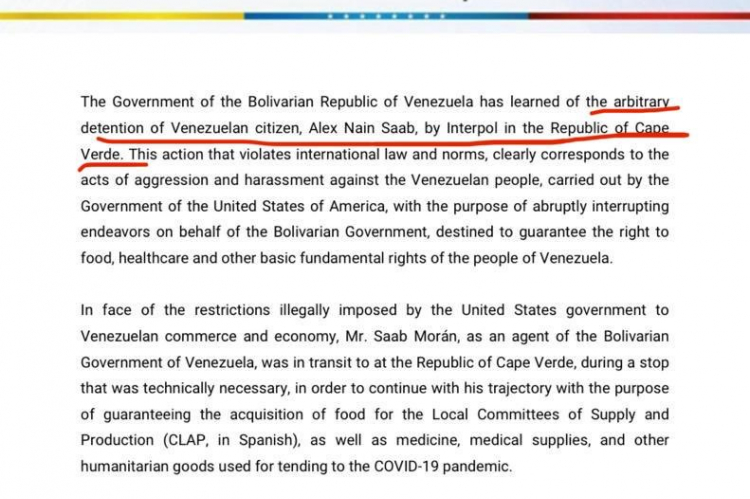