Only a negotiated solution can solve Venezuela's crisis

Many years ago, when Venezuela wasn't notorious internationally for a chavista-made humanitarian crisis but for having a loquacious leader that broke protocol wherever he went, I argued in an article that, ultimately, the end of chavismo could only come about by offering some sort of amnesty, pardons, and compromise to some of the most hated chavista officials and boligarchs in the country. History contains many examples. Seldom peace has been achieved by waging war. Venezuelans are incensed, of course, by the current predicament, and no one in its right mind can hold that against them. But invasions, military interventions, war, guerrilla, and terrorism never produce winners. Peoples loose. Countries loose, humanity being generally the first casualty. In these penurious times, the last thing Venezuela needs is armed conflict, and since it has become fashionable to discuss Venezuela's future perhaps it is helpful to rehash the argument.

Chavismo, as the criminal organization running the show is known, is firmly entrenched in power. Chavismo has been really lucky, in running a geopolitically insignificant country with plenty of oil during a boom. Oil income is what prompted the current crisis. Internally, Chavez's clever use of handouts -to all social, political and financial strata- guaranteed compliance. Across socioeconomic statuses, people were having a good time: the unemployed were getting free money through misiones, as the uneducated, the elderly and single mothers; the middle class was having a ball with CADIVI in the boom years; the boliburgeoisie made amounts that would put Jeff Bezos to shame; the army were given more and more command of strategic sectors of the economy; the opposition was, literally, financed by chavismo; in sum it's been a long, fruitful, and enjoyable piñata.

While this was happening Chavez was executing with precision his plan of power accumulation. His masterstroke was to gain absolute control of PDVSA, whose resources allowed him to, basically, buy enough time to consolidate his casino. Once in control of every aspect, from electoral results providing a democratic varnish to international alliances to outvote the U.S., chavismo could relax. The opposition, useless in any case, got completely co-opted. But the same luck that made chavismo into what it is (oil price) triggered a crisis of continental proportions. It was an acceptable premise to defend inaction, by saying that Venezuela's problems were issues that needed solving internally. The countries that took money from Chavez, and did quite a bit of business with him (Colombia) while Venezuela's democracy was being killed by a thousand cuts, are now at the receiving end, having to deal with millions of Venezuelans crossing borders with urgent need as fellow traveller.

Is not easy to deal with over a million people escaping a rapidly escalating humanitarian crisis, let alone with over three. These people can't, or at least shouldn't, be turned away. Germany, with one of the world's leading economies, had it really hard in a similar situation. Ask Angela Merkel. So what hope is there for Colombia? Ecuador? Peru? Brazil, South America's giant, wouldn't be drawn into the issue. Its policy remains the same: don't interfere, don't antagonise chavismo -embarrassment were chavismo to further expose Lula, Dilma et al too big a risk. Ignore the crisis. A recent exhibit is the UN's most recent Human Rights gathering, during which the Lima Group read a communiqué -by Peru- with the caveat that Brazil had not signed in agreement, despite being a party to the group. Venezuelan needy paupers are a huge problem that is going to test every single country in the region, whether they like it or not.

The U.S. policy all along has been like Brazil's. Ignoring while providing billions to fund Plan Colombia. Drug trafficking wasn't eradicated, it just moved across to Venezuela. All that tax payers' money, talks, Nobel Peace prize... to basically relocate the problem, aggravated now by the fact that -like in Ernesto Samper's time- the drug lords are running the country. These aren't typical drug lords: these are Chapos that also happen to sit atop the Western Hemisphere largest oil reserves, and have a global money laundering network at their disposal that'd be the envy of all organised crime. Sources report that State Department officials only have eyes for North Korea and the never ending mess in the Middle East nowadays. If there's any spare capacity left, China and Russia are next in the to-do list. Venezuela is not even an issue. In addition, Thomas Shannon like diplomats, seem bent on ensuring Trump is made to look like an ass. He needs no help in that department, though political expediency dictates the agenda in the Truman Building as much as in Palácio da Alvorada.

Given such an imperfect scenario the only recourse left is to negotiate a solution. As in any deal, the solution can only be brokered with parties that have something to bargain. That's not the absolutely corrupt Henry Ramos Allup. That's not the morality-deprived Julio Borges. That's not Odebrecht's man-in-the-opposition Henrique Capriles Radonsky, nor Simon Bolivar's great great great grandson (even though Bolivar never fathered children). These fellas have nothing to offer, nothing to bargain with, no power, certainly no integrity. Toothless pet dogs.

This is not to say that chavistas aren't worse, but at least chavismo has control. Maduro has his parcel -looked after by Cilia's mob, Tareck el Aissami, Diosdado Cabello, Manuel Quevedo... These thugs have plenty of bargaining chips. A disgusting and demoralising thought no doubt, though it is in the hands of someone like Delcy and Jorge Rodriguez that Venezuela can find its way back to a state of "normality". For let's just for a moment think that Maduro and Cilia are kicked out: what happens with those who are left, who still have phenomenal resources at their disposal? What happens if Diosdado refuses to play along? What if his subordinates in Cartel de los Soles decide to become a FARC encore? What with Tareck and his connections in the Middle East? Only they can order their criminal hordes to stand down, and even that's not guaranteed, for Venezuela under chavismo has amply demonstrated that total anarchy is what underpins the whole structure.

And what of Raul Castro, Tovarisch Putin, and Xi Jinping? Would they accept an antagonistic administration without retaliation? The deal then can't be cut just with chavismo, which could also be described as a protectorate of even more repugnant characters. In light of this, who has enough power and gravitas to seat across the table? It isn't the Venezuelan opposition I'm afraid, but the world's police. America's political status quo can pretend nothing's happening all they like, alas that doesn't change reality. The U.S. is also in the unique position of having an arsenal of what could be defined as non-warfare asymmetrical weapons (OFAC, a judiciary with global reach, etc.) that could be used to put serious pressure on Maduro and co. The exodus will continue however, thrusting layer upon layer of problems until the whole thing becomes insurmountable.

Between allowing Nicolas Maduro or Diosdado to enjoy the loot in freedom, a regular occurrence with indicted criminals in the U.S., or forcing hundreds of millions of people across the Americas to pick up the tab and suffer the consequences, what's best? Who will put -yet more- fatalities? Who will fund an invasion? Is it not evident that the only solution isn't more misery but cold-hearted pragmatism?

Cool heads and expert negotiators are needed, as much as a pack of get out of jail cards. Senator Marco Rubio, who wants to appear tough to his constituents with war talk, but has never worn a uniform, never been in harms' way, loves to rant about invasions he has never been part of, should take his irresponsible nonsense to the Versailles, where it'll surely be a hit. Sources in DC express serious doubts though, about General Mattis, General Kelly, or General Dunford's -all of whom have seen the worst of armed conflict and have even lost sons- disposition regarding "Comandante" Rubio's policy. This isn't a time for jokers but for responsible adults to take control. 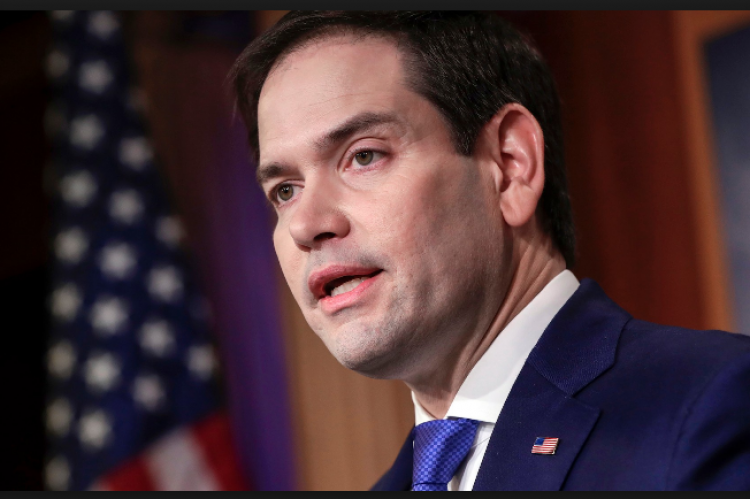