Corruption 101 in Venezuela: A case of me, myself, and I

Defendants in the case brought by PDVSA US Litigation Trust are challenging its standing. It is the natural thing to do, considering parties involved in setting up the trust, and the fact that defendants' Trafigura, Glencore, Vitol, Lukoil, etc., very business model is precisely to find and operate in resource-rich, desperately-corrupt banana republics, like Venezuela. Knowing how deals are done in Venezuela is an advantage for defendants, so demands to produce documents proving PDVSA's Trust's legality have been made. The "evidence" Boies, Schiller & Flexner (BSF) came up with, however, is one for the annals of most brazen exhibits of corruption anywhere on earth.

A case of me, myself and I

PDVSA's Litigation Trust was set up by Nelson Martinez, a now-jailed former Minister of Oil and Energy in Venezuela. The fact that Martinez was charged and jailed on corruption charges, in a place like Venezuela, should give enough pause to anybody approaching the topic.

Martinez's decision to set up the Trust with David Boies' BSF lawfirm counted with the "approval" of Venezuela's interim Attorney General, Reinaldo Muñoz. The deal had to be approved, considering: 1) that Martinez gifted Boies et al 66% of claim's proceeds, and 2) Martinez waived pretty much all rights Venezuela had on the matter.

The Trust, a set up that falls within legal remit of "Contracts of National Interest", could only had been approved by either Venezuela's Congress, or by Venezuela's President upon approval from Congress. None of that ever happened.

So the next best thing chavistas came up with, and Boies filed in court, was Attorney General Muñoz, who, in a Houdinian feat of magic to prove PDVSA US Litigation Trust's legality (standing), did the following on 12 July 2018:

Chavistas then doubled down, adding a Notary signature to "prove" legitimacy of Muñoz's omnipresence.

The authenticity of "evidence" presented by Boies ought to be taken in its appropriate context, one in which America's greatest litigator candidly claims in court hearings that he does not even know who Venezuela's maximum authority is. 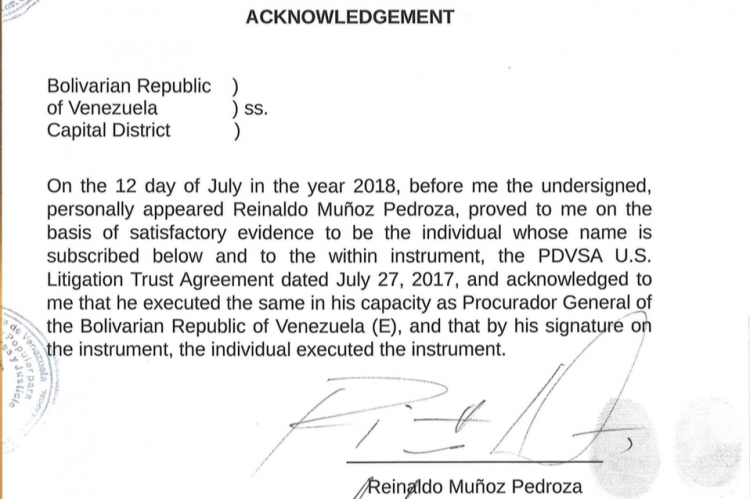