There's been a bit of a corruption scandal in the incipient Juan Guaidó "administration". Rossana Barrera and Kevin Rojas, two people tasked by Guaidó with assisting fleeing Venezuelan army upon arrival in Cúcuta, Colombia, have been playing fast and loose with donations aimed at helping those who have jumped ship. Guaidó is au courrant, has called for a full investigation. Colombian authorities are not happy. Embezzlement allegations have reached the WSJ. Chavismo has, of course, pounced on it. Jorge Rodriguez -if there ever was a chavista that should stay clear from corruption accusations he is it- thought appropriate to quote a tweet of mine, on a press conference about the issue, to sort of lend credibility to his preposterous accusations.

It does not bring any joy that Guaidó's nascent career is already questioned with allegations of embezzlement by close appointees. But this is Venezuela we are talking about, by far the most corrupt country in the Western Hemisphere. There's a number of measures that Guaidó has implemented that merit scrutiny, and I have been quite vocal about them.

But to have Jorge Rodriguez picking one tweet of mine to support his accusations, over 13,127 tweets mainly about Venezuelan corruption posted since joining in November 2008, is beyond unfathomable. The tweet in question, read by Rodriguez, below:

To bring some context to the issue: chavismo has blown, disappeared, looted, embezzled $1.5+ TRILLION since 1999. At least. Chavismo is in a league of its own when it comes to misappropriation of public funds.

To hear Rodriguez even mention, for instance, Alejandro Betancourt in the context of Guaidó's appointees alleged corruption, while pretending to ignore the documented fact that Betancourt is quite possibly a billionaire  thanks only to gargantuan chavista corruption that allowed him to get no-bid procurement contracts, is sickening. Betancourt and partners (fugitive) Convit, Trebbau, Romero Lazo, Travieso and D'Agostino come and go in Venezuela as if they've done nothing. If Rodriguez is so vehemently opposed to corruption, how come these thugs haven't been arrested?

How come Convit, who's been declared a fugitive of U.S. Justice due to his involvement with Betancourt and the Oberto brothers in multi billion dollar money laundering schemes at PDVSA, has not been paraded by Rodriguez in a press conference about corruption?

Rivero Zerpa is a "banker", associated with Wilmer Ruperti and Julio Herrera Velutini. Need I say how the latter "made" money under chavismo?

Ignacio Hernandez and Juan Carlos Gutierrez, both, have inescapable conflicts of interest. The first one as legal expert hired by Francisco Morillo (Helsinge), Glencore, Trafigura, etc. Hernandez was "appointed" by Guaidó as interim Attorney General. The second, Leopoldo Lopez's former lawyer, was "chosen" to spearhead recovery of looted assets and funds from Venezuela. Neither should have been given those roles with that sort of background.

However, notice how Rodriguez omitted Hernandez's professional services to Francisco Morillo, or failing to mention how Helsinge was able to run a scheme that allowed to win bid after bid -to the detriment of PDVSA- for over a decade. Neither did Rodriguez mention the complete fabrication of legal case against Leopoldo Lopez.

So, corruption? Yeah, only when the others do it. To hear Rodriguez decry Guaidó's corruption is like to hear Raul Castro talk about Cuban democracy, or Putin talk about Russia's respect vis-a-vis sovereignty of other nations: f%@& ludicrous.

Rodriguez is, without question, the main architect of continued electoral fraud in Venezuela. Chavismo owes to Rodriguez victory upon victory, since first no-bid contract granted to Smartmatic sometime in 2003. In fact, Smartmatic's first ever election in Venezuela was run on lottery machines modified for electoral purposes, purchased to Italy's Olivetti. To this day, I am still waiting on a reasonable explanation, either from Rodriguez or Smartmatic, as to why negotiation and acquisition was conducted by Rodriguez -in his former capacity of electoral chief- and not by Smartmatic executives.

Rodriguez has been recipient of in kind payments from Smartmatic. Rodriguez maintains close ties to Majed Khalil, to whom he instructed to set up a travel agency in Florida so Spanish former PM Jose Luis Rodriguez Zapatero could play his "mediator" role, without drawing attention to funding source of his travels. While Mayor of Caracas, Rodriguez granted no-bid contracts to the Neri Bonilla brothers, very close to über corrupt Rafael Ramirez and associates of his brother in law Baldo Sansó. Rodriguez regularly receives hospitality treats from Julio Borges Riquezes, and has a new totally dodgy operator called Ricardo Severin, married in turn into the Capriles 'not-corrupt-at-all' clan formed by Miguel Angel Capriles Lopez and Armando Capriles.

Rodriguez's lack of credibility is such that he obviously needs to prop his accusations. It is quite unfortunate that he picked my work to attack Guaidó, but then again, had his aides done their work he wouldn't have. 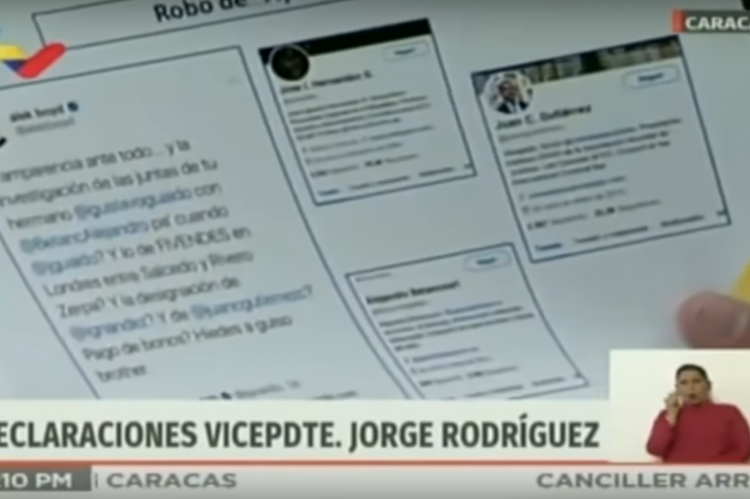