Bloomberg put this out yesterday: "Guaido approved the release of $152 million, of which about $100 million will be used to buy vaccines through the World Health Organization-backed Covax initiative or other organizations, according to a budget report approved by the National Assembly. Another $23 million will go to what was termed “defending democracy,” along with $2.3 million in advising, security and travel costs for his inner circle with no details disclosed on a payment to Guaido, if any. While Guaido approved more than $150 million in expenses, it’s possible that it won’t all be used. His press official did not immediately respond to requests seeking details on payments." So first a question: if Guaido's press official (Alberto Federico Ravell) didn't give details of how his boss is going to divy up the money, what is the source of funds' use breakdown, what "National Assembly" is that?

Little of what one reads today about Venezuela is either believable, or makes sense. What has been established with some clarity by now is that transparency is not Guaido's forte. It is also sufficiently clear that the U.S. continued support for Guaido runs counter to Guaido's popularity and, indeed, any vestige of real political muscle inside Venezuela. The definition of puppet in the dictionary should have Guaido's face attached. Whether is U.S. officials or their much beloved Leopoldo Lopez, Guaido is just the -rather often selectively hermetic- talking head. He is the Ravell of that sphere. There are issues he just won't address.

Unaccountable access to hundreds of millions falls exclusively on U.S.' lap. As controllers of Venezuela's frozen funds tap, U.S. Treasury officials decide who gets what, when and where. Is the U.S. Treasury’s Office of Foreign Assets Control, according to Bloomberg's piece responsible for disbursements, accountable to Venezuelans?

Guaido, and his fellow travellers, are in an enviable position (from a corruption point of view): they don't even have official title, they're accountable to no one. And so the "recognised leader of Venezuela", a title that exists only in the offices and corridors of the Harry S Truman building, is given access to hundreds of millions, is given command of massive energy conglomerates, and no Venezuelan, anywhere, can see what is the purported use of funds, who is responsible to administer, or what overseeing authority is designated to check expenditure / disbursements.

In corruption terms, and this site should know about that, this is chavismo 2.0. Obviouly, Lopez and co would kill to get their grubby hands on PDVSA, but short of that CITGO will do just fine. It is the gift that will keep on giving for as long as U.S. policy vis-a-vis Venezuela and Nicolas Maduro remains unaltered. It is a gift that comes ring-fenced from undue scrutiny. It is also a gift that has State, Treasury and White House legal and political protection. That is, the most formidable U.S. institutions have thrown their lot behind a collective of some Venezuelan politicos which are answerable to nobody, and that is meant to contribute to regime change, poverty alleviation, COVID treatments, and keep people hopeful back at the farm. That policy will prompt Maduro to sit down for negotiations and allow for free and fair elections...

As a source relied to this site the other day: "on these conditions, the U.S.-sanctioned version of Venezuela's opposition has no intention whatsoever to go back to Caracas and get into the ring with Maduro." We should add that they have never had it so good, since chavismo got to power in 1999. Chavismo can hold onto power forever on whatever income PDVSA, drug trafficking, gold smuggling, extorsion and other criminal activities generate. Equally, the "opposition led by Guaido" can forevermore adapt to its new found station with gusto. There are no incentives, to either side, to rock the boat.

Unfettered and unaccountable access to hundreds of millions of dollars isn’t something Lopez, Guaido, Borges, Vecchio, etc., are used to. It was always whatever crumb -governorship here, mayorship there- chavismo wanted to throw their way. Donald Trump changed that, and Biden is keeping the new normal in play. The merry, and now wealthy, band of professional Venezuelan politicians favoured by the State Deparment aren't going to lift a finger to change current state of affairs, and they most certainly won't do anything, ever, for transparency and accountability.

By way of example, we could point to the absolute dearth of efforts, of said politicos, to furnish U.S. law enforcement with actionable intel on their financial backers. Guaido is not about to turn up at DoJ's offices to talk about his and his family's relationship and reliance on Alejandro Betancourt, is he? Lopez isn't going to be briefing anybody about his coup-plotting comrade Raul Gorrin either, and talkative Ramos Allup won't ever spill a single bean on brother-in-law Francisco D'Agostino's partnership with Alex Saab. A while ago, Guaido appeared all committed to collaborate with Federal Agencies, and even appointed a former policeman (Ivan Simonovis) that spent 15 of the last 17 years in jail to spearhead the global fight against chavista graft. Simonovis, who refers to Lopez as his friend, isn't going to turn on those who freed him, has been out of the game for far too long and, gossip has it, has not received the kind of material / financial support needed to undertake given task. We are yet to hear about Simonovis' actions / contributions to some of the largest corruption cases we have been covering.

With such "leadership" it is a guaranteed certainty that Venezuela will continue being a clusterfuck, a sad spectacle of a bad joke. It is also certain that chavismo, whether red or blue, is the only actor in town. Chavismo has been lining its pockets for a while. Now, it is the time of the State Department's friends. 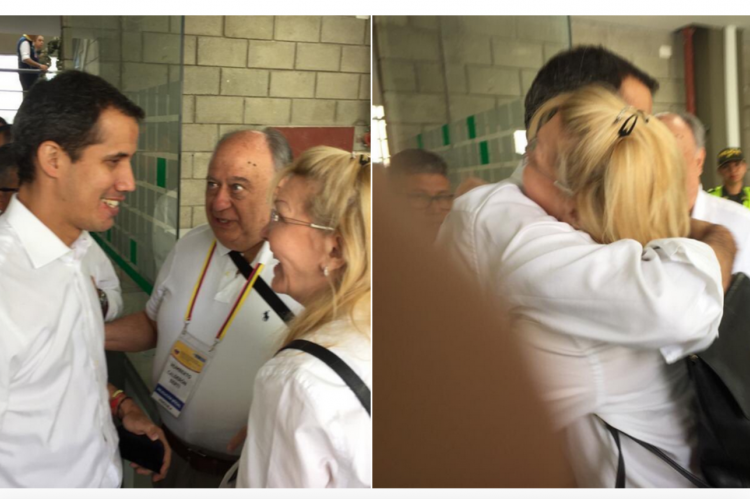