"...Ratificamos igualmente, que la unica fiscal general de la república en Venezuela se llama Luisa Ortega Diaz..." Assemblywoman Delsa Solorzano, 7 August 2017. Then, there's this session, when Julio Borges (current "presidential commissioner for foreign relations" for Juan Guaido) welcomed Luisa Ortega Diaz to Venezuela's Assembly (this was prior to his escape to Colombia, after a car he was in ran over a child that subsequently died). Note how nearly all those present stood up for and applauded Ortega Diaz:

With the above in mind, consider now documents below in pdf. These are communications, from Freddy Superlano -a born-again "anti corruption tsar"- to Luisa Ortega Diaz, amnesiac chavista Attorney General, now protected by Colombia's government. The documents are co-signed by Congressmen Conrado Perez and Richard Arteaga.

Superlano had a bit of an episode in Cucuta, Colombia, where prostitutes poisoned the party-boy congressman and his assistant, who eventually died. It's been alleged that prostitutes also made away with a couple of hundred thousand dollars (USD) in cash, that Superlano was carrying for "humanitarian aid" purposes.

The documents make for shocking reading. Basically Superlano, Perez and Arteaga clear Alex Saab of any involvement in wrongdoing that his companies (ASASI FOOD FZE & GROUP GRAND LIMITED) caused in the context of food imports in Venezuela (CLAP). One of the documents is dated August of 2018. The other, a resolution, refers to probes started around May / June 2018 by a subcomission formed by Arteaga and Congressman Adolfo Superlano.

Superlano and co claim that they could find no evidence of Saab's relations with Asasi Food and Group Grand, despite claims made by the very Luisa Ortega Diaz with respect to Saab's involvement in those businesses in August 2017. They also claimed that Saab's deals in Venezuela had not caused any losses to public coffers, and that no evidence of Saab being a proxy of Maduro was found.

Superlano, Perez and Arteaga decidely ignored Saab's involvement in construction contracts and in fake imports with the SUCRE currency, exposed in this site since October 2013. Superlano and co saw no wrongdoing, in a time when authorities in many other jurisdictions were, already, chasing Saab.

Superlano and co were part of a Congressional Commission, headed once by Freddy Guevara, that was formed to investigate corruption, "whatever the consequences". This site was contacted by Guevara, to assist in documenting grand theft in Venezuela, when the commission was launched. The first question put to Guevara, from notes of that telephone conversation had on 9 February 2016, was: "if you're serious about corruption, the first person you must investigate in Henry Ramos Allup. Will you?" (Congress Chair at the time). Guevara said that due to political pacts between Voluntad Popular and Acción Democrática, no probe into Ramos Allup would be considered. That meant no proper investigation into Derwick, Francisco Morillo and Helsinge, and Francisco D'Agostino would be done.

It is evident now, that no investigation into Alex Saab's gigantic corruption network will ever get traction in Venezuela's Congress either. Requests for comments put to Superlano, Perez and Arteaga were not answered. 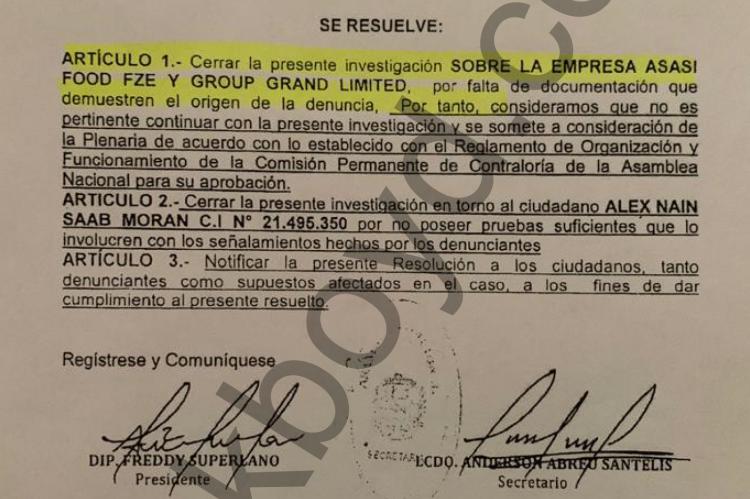