Solutions to Venezuela's miserable situation are, to put it decently, like belly buttons. This navel-gazing seems to be the pastime of choice of hasbeens, or batequebra'os as known in Venezuela. Rafael Ramirez, for instance, despite having squandered over one trillion USD, would like the world to see him as the potential saviour of Hugo Chavez's legacy, as if Venezuela hasn't suffered enough his corruption and the wretched chavista experiment. Then there's Luisa Ortega Diaz. For ten years this "stupid woman" -to use a current political description from Labour- was Venezuela's Attorney General. Ortega Diaz's blindness to Chavismo's rampant corruption was like the one from Ramirez, as both Minister of Energy and PDVSA's CEO: the most salient characteristic. Also like Ramirez, Ortega Diaz is touting herself as a possible candidate to lead a "transition". As Attorney General, Ortega Diaz did negligible work to combat graft. What she did do, however, was to selectively use the power of her office to chase "enemies of the revolution". But who are these enemies?

A quick search for wanted persons by Venezuela (enemies), on INTERPOL's database, returns no results. Not even one. Ortega Diaz's replacement (Tarek William Saab), talks a big game about his office's "fight against corruption", but the reality is pretty much like that during Ortega Diaz's days. Ramirez does not appear as a wanted man in INTERPOL's wanted persons database. In fact, he travels in total freedom, and has threatened the Maduro regime with revealing highly compromising corruption evidence, which he obviously has by the truckload considering previous roles. Ortega Diaz is monetising her information as well.

None of the Venezuelan criminals recently indicted and charged by The Justice Department, some of whom still on the run (Francisco Convit, Raul Gorrin, Nervis Villalobos, Javier Alvarado, Alejandro Isturiz), appear as wanted. None have been arrested in Venezuela.

The fact that INTERPOL is not accepting Red Notices from Venezuela anymore was caused by Ortega Diaz herself, who abused her office's powers filing such requests. A few years ago (2009-2011) Venezuela's financial / banking system went through a crisis. Chavismo decided one day that there were friendly banks / bankers, and there were corrupt ones. The truth is hardly any would pass a proper audit, then and now (remember Blue Bank International N.V.?), however Ortega Diaz was tasked to chase these foes. Nelson Mezerhane, Pedro Torres Ciliberto and son Pedro Torres Picon, Eligio Cedeño, Gonzalo Tirado, Ricardo Fernandez Barrueco, Jose Zambrano, and others were made "enemies". Their banks were shown for what they were. Most of them made away with hundreds of millions of dollars, literally taking depositors' money from their banks. Others were arrested before being able to flee. None could provide believable information as to legitimacy of stolen wealth, or legality of their operations.

Some of these "bankers" fought back, their lawyers succesfully challenged Ortega Diaz's requests to INTERPOL, on the spurious argument that they were being prosecuted on political grounds. Never mind what they stole, these thugs pitched themselves -which they continue doing to this day- as victims of chavismo's abusive use of Venezuela's judiciary. And the problem is that stolen loot has allowed them to rebrand and restablish themselves in the U.S., Spain, the Dominican Republic and elsewhere as "legitimate" entrepreneurs.

Consequences for Venezuela have been dire. Most of these thugs got away with their crimes, and most of the stolen loot will never be recovered. Mezerhane, Cedeño and both Torres Sr and Jr live very comfortably indeed in the U.S. where money has been laundered through philantropism, art patronage, investments... They maintain relations with Venezuela's opposition, and provide funds to it. As Gustavo Tovar Arroyo put it to this site once, when discussing Pedro Torres Picon and the hundreds of millions misappropriated by him and his father: some corrupt are better than others, and the ones that help (fund) the opposition should be spared from any criticism / exposure (#conmiscorruptosnotemetas).

Ortega Diaz is, of course, part of the "better" ones now. So are Ramirez, Derwick Associates, Raul Gorrin, Mezerhane, and Cedeño. They all "help" the opposition, somewhat. The problem is that apart from a handful exceptions, Venezuela's corrupt will get away. Ortega is now under Colombia's protection. Ramirez, this site has been told, lives quite well in Italy. Venezuelan "bankers and entrepreneurs" are laundering massive amounts in Madrid, Miami, New York... But worse still, these thugs are making the rounds touting themselves as part of the solution to Venezuela's problems. Some of these people are actually being heard, they're being given platforms as if they're innocent, as if what they did never took place.

Their problem is being abroad. Outside of Venezuela these people are nothing, utterly irrelevant. Better than having money, is having power, and these thugs had it back in Venezuela. Abroad, they only have money, and that doesn't make them special. All these self-made crooks want to go back to that stage in time when they had it all, and the only place where they can realise that dream is Venezuela. When Mezerhane spent over half a million dollars in U.S. lobbying, it wasn't because he wanted to become powerful in the U.S., but because he wanted to ensure that his version of events was accepted at the highest levels. Same formula has been applied by Cedeño, Derwick Associates, Raul Gorrin, David Osio, Danilo Diazgranados and so many others

The only way to get some kind of transition is to force the hand of those who actually control power in Venezuela today. Corrupt hasbeens should be the last folk allowed to participate in discussions about the country's future. That applies to all of the above, and to the ones that were "friendly", to the ones that are yet to be indicted, to the ones that were protected by the likes of Ortega and Ramirez, and to the ones that took over the "politically prosecuted". Venezuela's "government" is a criminal organization. It's hard enough to deal with that as it is, to have to put up also with its facilitators and cronies. 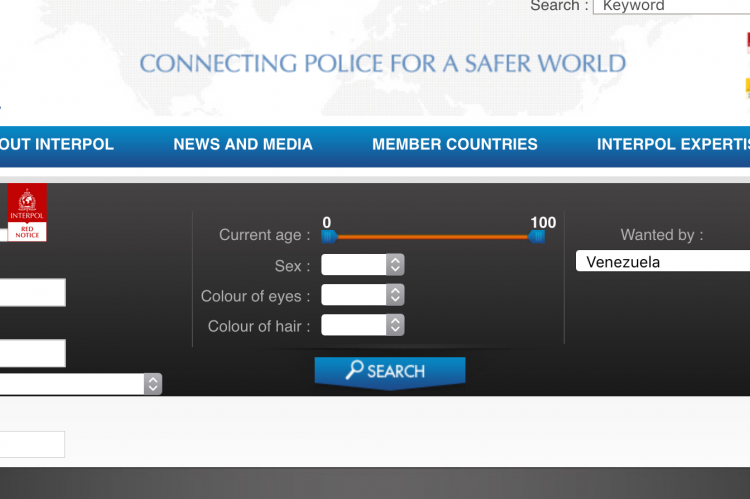