AP reported the other day that Harvest Natural Resources had dropped its lawsuit against former PDVSA CEO and Minister of Energy Rafael Ramirez. No information about settlements was published. Then Harvest filed a form 8-K with the SEC, which reads:

"In its Current Report on Form 8-K filed with the United States Securities and Exchange Commission (the “SEC”) on June 11, 2020, Harvest Natural Resources, Inc. (the “Company”) reported that the U.S. District Court for the Southern District of Texas had set aside the Company’s $1.4 billion default judgment against Rafael Dario Ramirez Carreno in a lawsuit that alleged damages incurred by the Company as a result of its inability to sell its Venezuelan assets in two failed transactions due to requests that the Company pay bribes to complete the sale. On August 26, 2020, the Company dismissed the litigation against Mr. Ramirez, after carefully assessing the business risks and benefits of the litigation."

In early June, Houston's Judge Lee Rosenthal had set aside a $1.4 billion judgement against Ramirez and said Harvest's case should proceed to the merits.

Considering the amount of evidence this site alone has managed to compile on Ramirez's decade of unfettered corruption at PDVSA, we thought it would be a walk in the park for Harvest to demonstrate Ramirez's rampant criminality. Alas it wasn't to be. Announcement on 26 August puts this civil matter to rest.

Ramirez is already crowing about his victory. In no time we shall see interviews in Reuters or other places, where his "reputation" is going to be "vindicated".

This site knows better than giving that thug the benefit of the doubt. And as we keep saying: civil lawsuits are easy, criminal prosecutions in different jurisdictions, that's an entirely different matter.

Many close associates of Ramirez, and we know they are close associates because we have the evidence, are either in the crosshairs or have already been indicted, charged, jailed, or are wanted by the U.S. Department of Justice. Francisco Convit, Matthias Krull, Carmelo Urdaneta Aqui, Javier Alvarado Ochoa, Nervis Villalobos, Roberto Rincon, Diego Salazar, Nelson Martinez, Jesus Enrique Luongo... are just but a handful that are dealing with the consequences of having participated in Ramirez's corruption ring.

The Andorra case has over 70,000 pages of evidence directly pointing to Ramirez. The Banco Espirito Santo case in Portugal? Same thing. DoJ's criminal probe against the Oberto brothers? Same. Money laundering by EFG and CBH banks in Switzerland? Ramirez signed for it, literally.

So it is a question of time, really. Life in that Roman olive grove, or close to the Vatican may have all the freedom trappings, but sooner or later justice will catch up with Ramirez, as it has with his brethren. 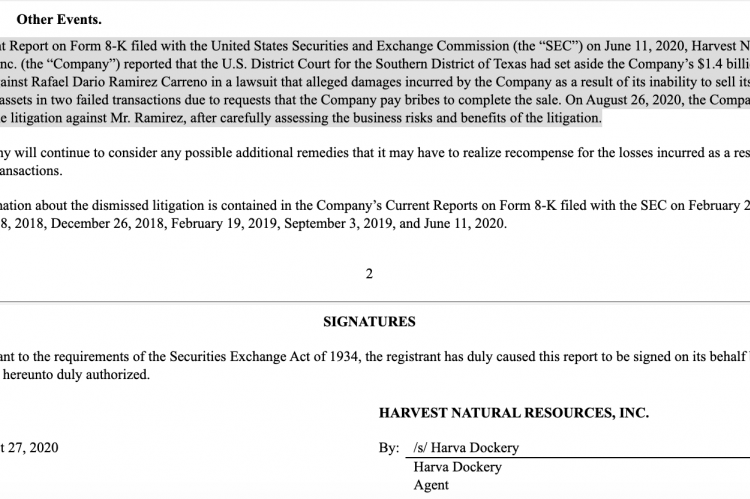