This is, yet another, "I told you so" moment that vindicates our work. This site broke the news about association between Betancourt / Convit and Gazprombank back in March 2016. We showed how Rafael Ramirez had signed agreements with Boris Ivanov, approving creation of a joint venture (Petrozamora) between PDVSA and Gazprom (in actual fact, deal was between Corporación Venezolana de Petróleo and Amsterdam-registered Gazprombank Latin America Ventures B.V.).

We exposed connection between Betancourt / Convit and Derwick's CFO Orlando Alvarado and Boris Ivanov and Christophe Gerard in the Amsterdam shell. In June 2017 we published information about a $35 million "loan" (bribe) that Betancourt and Convit (Derwick Oil & Gas) had given to Gazprombank Latin America Ventures B.V. This loan caused a sanction against Gazprombank in Switzerland by the financial watchdog in early 2018.

This site also remains, as of this writing, the only one on the internet to have exposed connection between Betancourt / Convit / Alvarado and former Deputy Head of FSB Vladimir Anisimov, in business relations between Petrozamora, PDVSA and Nynas.

The Oberto brothers, Betancourt, Convit, and de Beaumont are at the core of a DoJ probe into massive money laundering centered at PDVSA. Betancourt and Convit are also part of a separate probe, in association with Raul Gorrin and others. This site broke Betancourt's involvement in Operation Money Flight ($1.2 billion) in October 2018.

Pedro Binaggia, the confidential source that collaborated with DoJ in Operation Money Flight, got power of attorney from the Obertos on Violet Advisors' account, the EFG Bank account used for laundering the initial $1 billion.

Swiss authorities and DoJ would be well advised in following also the trail of Danilo Diazgranados, ultimately the one responsible for introducing de Beaumont as well as CBH's CEO Joseph Benhamou into the Obertos / Betancourt / Convit deal. Sources familiar with the operation informed this site that CBH laundered $3.5 billion, of the $4.5 billion deal.

This site reported in August 2014 about de Beaumont's real estate purchase in Miami. We can also reveal that Benhamou and Diazgranados got $22 million each for their involvement. The Derwick boys got $196 million worth of "commissions" through Calandra, Banstead, IPC Investments and Vencon Holdings, according to Gotham City report. Separately, $100 million were sent from EFG Bank by the Obertos to shells Minenven, Delphi, Julotti, Zoletto, Imminvest, IPC Investments, Vencon, and Sinfin (also controlled by Betancourt and Convit) as part of $1 billion tranche of PDVSA deposits into Violet Advisors. Other Swiss banks involved were Bank Frey, HSBC, and Julius Baer.

Francisco Convit is a DoJ wanted fugitive for his involvement in Operation Money Flight. Sources report that he had been arrested in Caracas over the past weekend. Alejandro Betancourt is an unindicted co-conspirator in Operation Money Flight. Sources report DoJ has a sealed indictment ready. Betancourt hired Rudy Giuliani to lobby U.S. AG William Barr. The Oberto brothers' passports were confiscated and they remain in Miami at prosecutor's Michael Nadler beck and call. Sources report they've split strategies: one brother wants to settle while the other wants to take his defence as far as possible. Charles Henry de Beaumont's status is similar to that of the Obertos, as per sources familiar with proceedings. 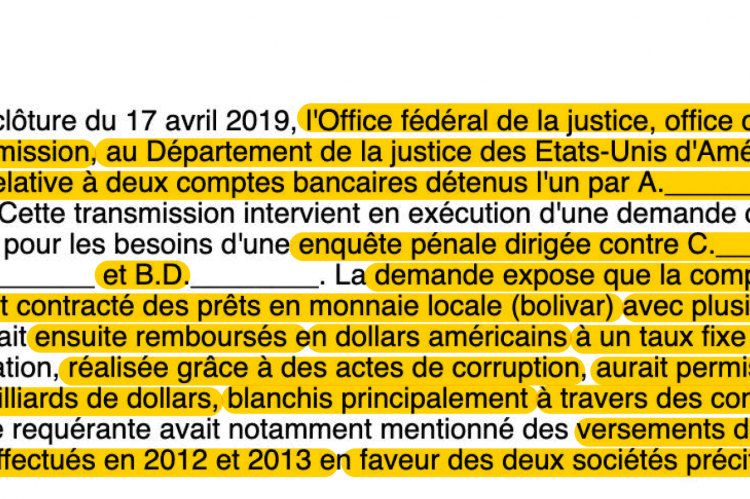