Any journalist, blogger, commentator that has ever been victimised by very powerful thugs and their detestable counsel ought to be following -with great interest- various class actions brought against Catherine Belton in London. The issue at hand is Belton's book, Putin's People, which gives a detailed account of how a bunch of thugs looted Russia -thanks to thug-in-chief Putin and his KGB, becoming oligarchs in the process. With stolen proceeds, thugs in question purchase football clubs, newspapers, spin doctors, human rights lawyers, and use courts in the Western world to stifle perfectly truthful, accurate, and valid criticism. Collective action against Belton has already proven the gist of her book: Roman Abramovich, Pyotr Aven, Mikhail Fridman and Rosneft, read Putin's People, are suing for libel.

The UK has a piece of legislation called the Criminal Finances Act 2017. Said Act allows for representations to be made by competent authorities before British Courts regarding suspect acquisition of assets in the UK. On successful applications the courts can issue Unexplained Wealth Orders, which are meant to establish legitimacy of funds used by individuals or companies. In short, its intended purpose is to prevent money laundering.

When it comes to combating launder of wealth illegally obtained in Russia, UK authorities have been napping -purposely- for decades. Exhibit 1 is the very Abramovich, who purchased Chelsea F.C. in 2003. No UK authority then bothered asking how this street trader with a criminal record became one of Russia's richest oligarchs. The other two, Aven and Fridman, are cut from similar cloth. The latter went from window cleaner to controlling one of Russia's largest banks, helped by the former, once Minister of Foreign Economic Relations for the Russian Federation. Then there's the fourth plaintiff: Putin-controlled Rosneft.

The plaintiffs are in an impossible situation. Every last cent spent on Hugh Tomlinson-type of abhorrent talking heads is corrupt in origin. Saying so, which is basically what Belton stands accused of, is not libel but a statement of fact. Moreover, Abramovich is on the record admitting as much, claiming that he paid "...billions of dollars for political favours and protection fees to get his hands on the former Soviet Union's mineral wealth." Fridman did the same, and Aven, and all other Russian thugs referred to nowadays as billionaires.

Not a single one of them made their wealth legitimately. Contrary to what was reported about Abramovich bribe paying practices, it is not a puzzle how a "penniless street trader rose to amass a €14.4bn fortune". There is no mystery here. Contacts at the highest levels made this class of penniless window cleaners into Russia's new oligarchy. Even one of the world’s most corrupt jurisdictions refused a resident visa application from Abramovich, claiming he "was known to the government in connection with alleged money laundering and alleged contacts to criminal organizations."

There is no question, argument, nor doubt as to how Putin runs his criminal empire. UK authorities know very well the kind of treatment regularly meted out to Putin's critics. It remains to be seen how Justice Tipples is going to deal with these entirely frivolous claims. Legally, the test that must be established by Putin's minions is that they suffered "serious harm" by Belton's book, and one might ask: where, in Putin's Palace? Are we going to pretend now that these thugs have reputations, other than criminal, to protect?

Then there's the side of the publisher, Harper Collins, owned by none other than Rupert Murdoch. Is he looking for leverage with Putin, is it to establish a precedent with Russian thugs, or is this a genuine attempt to defend journalism and a free press? 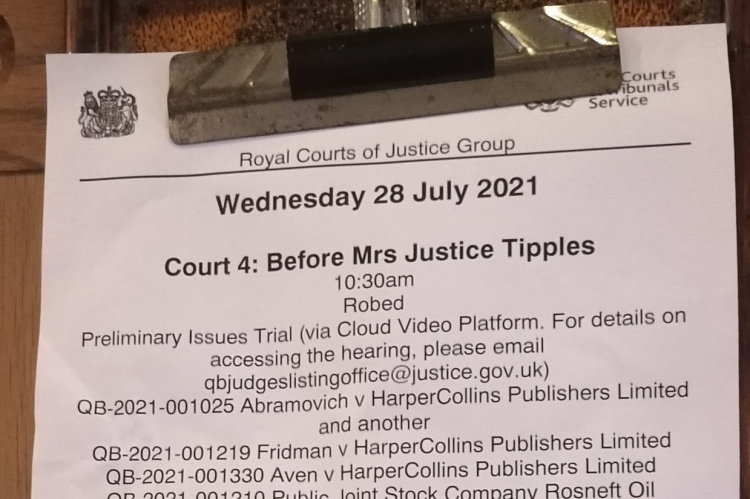