Social sciences scholars will look at Venezuela in the future as a sui generis case. A self-described socialist revolution, led by an idealistic military putschist, that managed to annihilate one of the best managed State-owned energy conglomerates the world has seen, producing along the way the largest humanitarian crisis to affect the Western Hemisphere. Out of nowhere, a fresh face (Congress Chair Juan Guaidó) emerged, gaining wide international support that moved from symbolic to real implications -for the existing regime- in a matter of hours. Every imaginable superlative applies. A transition is sought, alas no road map exists, how then will it be executed?

Getting a constellation of cartel-like criminal organizations (Nicolas Maduro's kleptocratic regime) to peacefully relinquish power is not a viable feat. Bids have to exceed what's already in hand. Take gasoline smuggling, for example, one of the rackets controlled by Venezuelan army factions: it is said to produce profits in excess of $4 billion / year to those involved. What offer could incoming Guaidó make to these people? Take multi billion dollar drug trafficking: what incentive could be offered to Andean region cartels, operating in Venezuela with absolute impunity and State protection, to vacate the one space from where shipments can be launched to international markets uninterrupted?

There is nothing Guaidó could realistically offer to such elements. No sanctions regime aimed at a debt-hungry and diminished oil exporting enterprise could affect these criminals. In addition, two of the world's three superpowers are heavily invested with Maduro for financial reasons: about $80 billion dollars are at stake. The other superpower has primary and secondary debt holders that could have a similar amount outstanding. They also have a legitimate claim for principal and interests. Guaidó's Congress never approved any of it, and yet it must deal with these stake holders regardless.

Carlos Vecchio, Guaidó's Chargé d'Affaires in the U.S., stated that any and all deals not approved by Congress -assuming 2015 onwards Congress- will be recognised. Thus even before getting a grip, formidably powerful foes are alienated. Asked on how control over CITGO, and its revenue, could be regained, Vecchio candidly admitted that he'd been in the role for just two days and did not have a clear answer.

Julio Borges, another representative of Guaidó's interim administration, insists Cuba keeps chavismo in power. Cuba was at some point in the past a key ally of chavismo, but that is no longer the case. Colombian terrorist group ELN represents today a much bigger problem, exercising control over vast gold-producing regions in Venezuela. What negotiation, other than warfare, could force such people out? This site asked Borges about Guaidó's amnesty offer. While drug trafficking and human rights violations will not be forgiven, corruption does not seem to have been given any consideration. No wonder Luisa Ortega and Rafael Ramirez are vying to become presidential candidates in coming elections.

The biggest danger, however, could prove to be Guaidó's very own source of legitimacy (Venezuela's Congress), where chavismo has 55 representatives and is the single largest block. Should uttterly corrupt opposition-aligned leaders, like Henry Ramos Allup, Manuel Rosales, Omar Barboza, Henrique Capriles and Timoteo Zambrano, agree to a cohabitation / co-governing compromise with Maduro, who's to say then that he lacks standing?

Elections are seen as the solution, however the electoral arbiter is but an appendix of the regime. Current electoral authorities are fully supportive of Maduro, as is the case with the judiciary. How can Guaidó then call for fresh elections? Who will run the process when appointment of new electoral authorities will almost certainly be blocked by a Supreme Court controlled by the likes of Raul Gorrin and Cilia Flores? If manual vote, as done in Venezuelan universities, is implemented, chavismo will get such a trouncing it will take at least a generation to recover. Is this in the cards?

ConocoPhillips' legal actions against PDVSA provides perhaps the best set of guidelines as to how to push Venezuela into a negotiating position. The Trump administration ought to take cues and replicate / expand actions, so that Maduro's position becomes untenable and he's forced into accepting transitions' conditions. That however won't do away with ELN, drug cartels, army mafias, China and Russia, etc.

Everyone seems to agree that Maduro's time is up, alas nobody knows how will that come about, if or when. Since recent bombing in Bogotá, Ivan Duque has a legitimate claim to chase perpetrators, wherever they are. Will he pounce, as Uribe / Santos did in Ecuador with Raul Reyes? Will Guaidó's current level of international support survive such an event? Is there a situation room somewhere where scenarios such as these are being analysed? In typical Venezuelan fashion, this transition seems a "como vaya viniendo, vamos viendo" kind of haphazard process lacking any vestige of clarity. 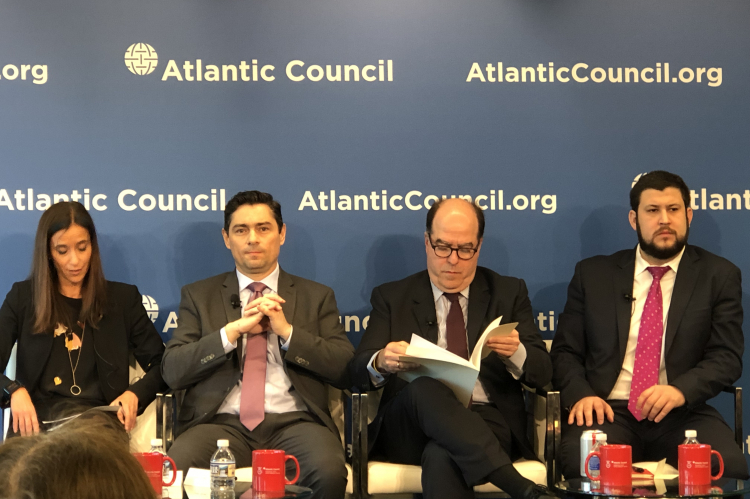