Oh the glee of Antonio Mugica -founder / CEO of Smartmatic and very first specimen of the bolichico class- must be stratospheric right now. Donald Trump's entirely baseless electoral fraud claims will legitimise Mugica's e-voting company forevermore. The best voting company chavista money could buy has an unblemished track record. Till Trump appeared, Smartmatic had a legitimately earned average of 100% on elections in which it had participated marred by genuine fraud allegations. In Venezuela, which is where Mugica got made, the two bit outfit came out of nowhere, had no track record, got contracted without bid, got funded with chavista money, and it ran elections between 2004 and 2017. Smartmatic consolidated chavismo in power in absolute and permanent fashion. Like former electoral chief Jorge Rodriguez once told me: "Venezuela's electoral board is building an e-voting system which is going to be independent." Who, pray tell, helped Rodriguez and chavismo achieve that "independence"? None other than Mr Smartmatic, Antonio Mugica. As a matter of fact, for its first ever electoral process (Venezuela's recall referendum of 2004), Smartmatic had neither the required hardware nor the software. The issue was solved by purchasing, and adapting, lottery-playing machines from Italy's Olivetti. And who made that seminal purchase, Mugica? Nah, it was Jorge Rodriguez, but no one will ever hear any explanations about that in Smartmatic's 'fact-checker' page.

With the hundreds of millions obtained from no-bid contracts with chavismo, Mugica took flight. The U.S. was his first stopover. There, he acquired Sequoia in March 2005, from De La Rue, and so he entered U.S. elections. A little while after, Mugica and Smartmatic were the subject of intense Committee on Foreign Investment in the United States' (CFIUS) attention. Reason? A fiasco in Chicago. Mugica thought it was a good idea to fly a bunch of Venezuelan e-voting 'technicians' on tourist visas to 'oversee' elections in Chicago. When the news broke, Rep. Carolyn Maloney asked CFIUS the only relevant question: who vetted Sequoia's acquisition by Smartmatic?

Nobody. News about a Chavez' regime 28% stake in Smartmatic was out. A cocky Mugica said at the time Smartmatic was ready to submit to whatever scrutiny into its ownership CFIUS wanted. Before any scrutinising could take place however, Mugica 'sold' Sequoia. It was a 'management-led buy out' if memory serves well. That is: Mugica's employees ran Sequoia in his stead for a little while until Dominion acquired Sequoia.

Having been burned in the U.S. Mugica amended his global expansion plans to target truly democratic and transparent nations: Mexico, Bolivia, Colombia, African countries, the Philippines... In every place Smartmatic turned up, controversy followed shortly after. Allegations were from padding electoral rolls in Bolivia -a method perfected in Venezuela, to real-time access to servers during elections in Philippines, which, again, is standard operating procedure in Venezuelan elections, as General Raul Baduel told me in 2008.

Smartmatic's actitivites in the Philippines are interesting for one reason: Dominion licensed some of its technology to Smartmatic in that market.

Mugica / Smartmatic were a Dutch concern in Mexico, a U.S. concern in Argentina, a UK concern in Italy... Venezuela just isn't an appropriate origin for 'Miami-based', London-residing Mugica. With all the cash 'earned' running elections in Venezuela and other equally corrupt countries, Mugica got a few 'honourable' names into Smartmatic's board. That's the easy part.

What's not so easy is to establish a reputation, when every last deal is corrupt in origin. Mugica has never provided convicing, incontrovertible evidence, for instance, that the Venezuelan regime no longer holds 28% on Smartmatic. For all the BS about being the world's leading / best e-voting company, Smartmatic's software has never been independently audited.

In Venezuela, in November 2005, in front of European and American electoral observers, a mock election took place. It had been organised by Mugica's partner, Jorge Rodriguez, real boss of the electoral board. During that exercise, a technician connected a laptop to a Smartmatic machine and started saying how every voter had voted in the mock election. Everyone was dismissed, immediately, by an enraged Rodriguez who could not explain how the technician had been able to rebuild the sequence of the vote, and determine exactly how every vote was cast.

The 2005 final report by the European Mission of Electoral Observers reads:

"The Venezuelan electronic voting system was developed by Smartmatic who was in charge of all programming of the VMs and the development of the Results Aggregation Center software. The CNE, however, owns the source code of all Smartmatic software they use. An IT team at the CNE fully audited the source code, both to verify functionality and to identify areas that need improvement or redesign. Requests for redesign by the CNE included improved randomization methods to hide the sequence of the stored votes and the need for confirmation when casting blank ballots. In the future, the CNE plans to take over all the software development work from Smartmatic. After that Smartmatic will only be in charge for logistics and hardware service and assembly. While the source codes are owned by the CNE they are for commercial reasons not made available for public scrutiny and no independent third party audits have been conducted on any part of the electronic voting system."

There. In black and white: "...no independent third party audits have been conducted on any part of the electronic voting system." Don't take my word. Go read the report.

Donald Trump and his deranged legal team started spewing all kinds of fabrications against Smartmatic and Dominion. Even Hugo Chavez, deceased in 2013, and Indra (Spanish voting co that was replaced in Venezuela by Smartmatic), were added to Trump's lunacies. Every legitimate claim against Smartmatic, of which there are many, are going to be lumped with Sidney Powell and Rudy Giuliani's deranged and completely baseless allegations. What Trump is doing, ultimately, is trivialising Smartmatic's perfect score of "inadequate performance". From now on, Mugica / Smartmatic will brush off genuine concerns about its lack of transparency, inauditability, with a "yeah, like the Trump claims..."

As noted the other day, Donald Trump is a god send to Smartmatic. It is just such a shame that a megalomaniacal clown is going to forever whitewash Smartmatic, which is now suing and demanding retractions. Lou Dobbs should have known better. After all he did do some segments on Smartmatic when the Chicago fiasco took place in 2006. American media reporting on the issue have done a disservice to democracy. For one could very easily point to inaccuracies and falsehoods in Smartmatic's PR offensive without conflating issues. Not having taken part in a non-existent fraud in recent presidential elections in America does not mean that elsewhere Smartmatic's claims of innocence have basis in fact.

Not one free, fair and transparent election in which Smartmatic has participated has taken place in Venezuela, which is the jurisdiction where Smartmatic has gotten the largest share of its income over the years. In fact, Mugica's attempt to 'blow the whistle' on the 2017 election results that saw Nicolas Maduro 'defeat' his opponent are unsupported, and therefore unbelievable. Mugica never presented any evidence about the fraud he claimed -from London- that Maduro had perpetrated. Nothing.

In a press conference where no questions were allowed, he just read his script and left, without showing even a made up bit of data. Ergo, the man who claims that his company's process are completely transparent, and auditable, told the world he had discovered a one million vote discrepancy in electoral results in Venezuela and didn't even bother to produce the evidence to back it up. Further attempts by this site to get to the bottom of that claim in particular were dismissed by Mugica.

It is simply impossible to take Mugica at face value, in light of his track record in Venezuela. Nobody gets to do business with chavismo, between 2004 and 2017, and run an existential part of its structure (elections), without very deep and very solid connections to it. Chavistas were never going to leave that aspect to someone they could not control. So Mugica's claims that Smartmatic has no governments as partners is total and absolute bullshit. He took money from the Chavez government. He had a chavista representative in the board of one of his companies. Venezuela's electoral boss negotiated on his behalf purchase of first ever lot of hardware. For over a decade, Mugica ran many fraudulent elections for chavismo. These fact remain undisputed.

Trump was always going to claim fraud. His Twitter account TL is filled with such claims, much before Powell and Giuliani met reporters. Trump's has a credibility problem, no doubt. But Mugica and his dodgy company have another one. 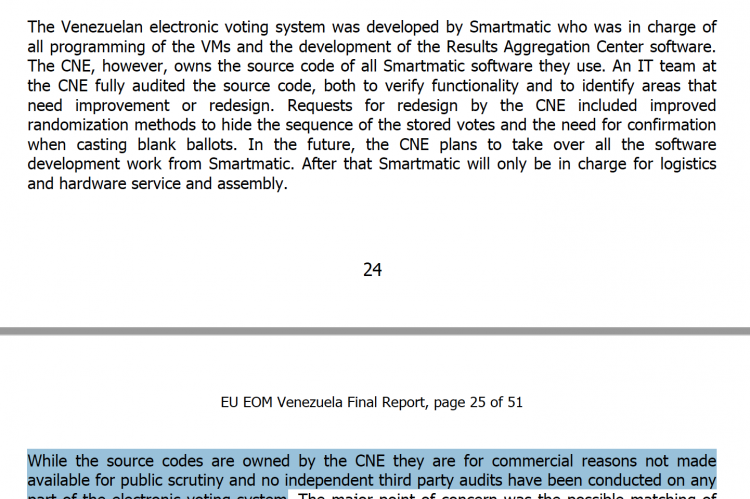