So on Tuesday this week, sources reported that a Geneva court issued a ruling against Francisco Morillo and Helsinge, in a fraud case brought by PDVSA. Geneva's prosecutors launched a penal probe upon information on a large fraud scheme perpetrated by Morillo and Helsinge, in which some of the largest energy trading houses of Switzerland are involved. On Friday, the WSJ published what amounts to little more than an advertorial, in which Boies' involvement with PDVSA US Litigation Trust -a vehicle under Boies' absolute control created with a convicted felon, a representative of an utterly corrupt Boligarch, and missing and / or incarcerated corrupt officials- is given a free pass. The litigation trust is the vehicle Boies used to launch a civil action against Morillo, Helsinge, Trafigura, Glencore, et al in Florida. Boies and his merry band of "Venezuela saviours" stand to get 66% of potential proceeds. Distribution of remaining 34%, PDVSA's share, is also under Boies absolute control.

The piece fails to address a number of crucial points, for instance, just how John Brennan (22% share of 66%) came to be in possession of the information that prompted the Florida lawsuit. No mention of Wilmer Ruperti (source of info) is made anywhere, neither of Ruperti's past, deals with the most corrupt PDVSA officials, etc. Alex Pencu, with rights to 35% share of Boies' 22%, is not mentioned. Pencu's professional relationship with Ruperti is not mentioned.

No mention of (illegal) formation of trust, identities of trustees, and their relationship to either Boies or Bill Duker (22%) is made. No mention of PDVSA waiving all rights to claim is made.

WSJ hacks also missed the bit about Boies' lies in court proceedings. Depositions of involved Venezuelan officials could not take place due to express and direct orders from Nicolas Maduro -as per Boies' arguments. This site however posted travel logs detailing foreign trips of said officials in the timeframe of Maduro "imposed" travel restrictions, which ended up being added to the case docket.

Boies said “I don’t think our government has or should ally itself on the side of corruption just to deprive the Venezuelan people of assets that they’re entitled to,” but Boies can forge alliances with the worse scum that's ever ruled and done business in Venezuela, on his way to deprive the Venezuelan people of 66% of what's theirs, and that's just fine according to some idiotic "legal ethics expert" consulted.

WSJ hacks didn't see fit to question how getting 66% of what belongs to the Venezuelan people is not depriving that nation of its assets. Boies alliance with an illegaly appointed Attorney General, an official jailed on corruption charges, an utterly corrupt Boligarch and his operatives, and a convicted felon, is presented in the WSJ as an "effort to battle corruption and help a struggling nation." Like that, unchallenged.

Boies' blindness to own hypocrisy is evident in case hearings, where the "great litigator" defends illegal actions of corrupt officials in formation of the trust, simultaneously arguing that laws that govern actions of very same officials are not a subject for adjudication in U.S. courts. Sadly the WSJ hacks never got to that part. 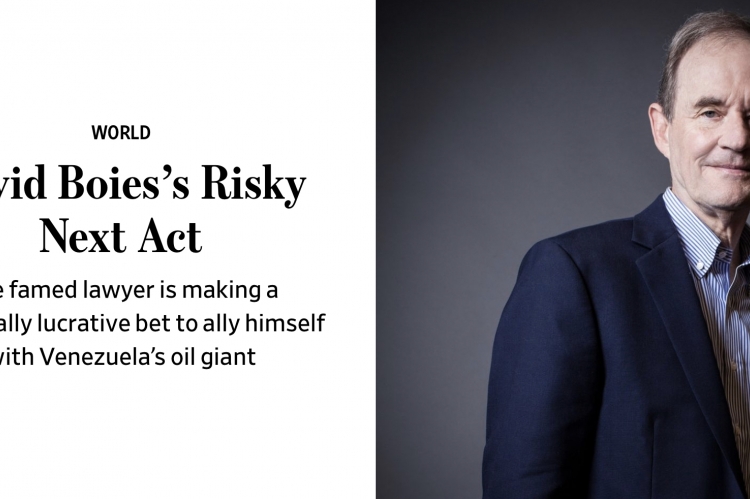