When will the Oberto Anselmi bros & Derwick Associates be indicted?

Notice mention to Paulo Nacif below:

The above is related to $106 million bribe payments that Banco Espirito Santo thug-in-chief Ricardo Salgado paid to Rafael Ramirez's associates / collaborators to manage PDVSA funds. Hold that thought for a moment, and read below instructions that Paulo Nacif emailed to Pablo Custer and Joao Alexandre Silva on 21 March 2012:

We would like to inform you that BES is providing today a wire transfer ordered by PDVSA of the amount of USD 230,000,000.00.

Who is Pablo Custer? Together with Dieter Staeubli, personal banker of Violet Advisors -recipient of wire- at EFG Bank. Who is Violet Advisors? Ignacio and Luis Oberto Anselmi, but also Francisco Convit, Pedro Trebbau, and Leopoldo Alejandro Betancourt Lopez (Derwick Associates) according to documents seen by this site.

In fact, an EFG Bank internal report of an "External visit to Caracas with Ignacio O., Francisco C., Leopoldo B." on 21 February 2013, refers to Oberto, Convit and Betancourt as members of a client group with whom discussion pertaining to evolution of portfolios and service satisfaction levels were had.

According to EFG Bank internal documents "during 1H2012 these clients conducted very profitable transactions (through EFG) in the amount of of approx USD 1.5 Billions. At least the same amount (probably more!) was transacted through other banks (i.e. CBH Geneva)."

Internal EFG Bank documents describe what Gorrin, Perdomo, the Obertos, Convit, Trebbau and Betancourt were doing with PDVSA. A "reputation risk" report claims "PDVSA has decided to provide USD liquidity to the FX market in the USD 5 Bln. neighborhood during 2012."

In "Other Comments" of same report, EFG claims "During 2009 we have processed FX swaps in excess of USD 1 Bln where PDVSA was the USD supplier and Banco Activo, C.A. (account 583252) the operator / intermediary." Legal justifications for these transactions was provided by the "Caracas office of Baker & McKenzie". The Obertos are described as "high quality counterparties". Pedro Binaggia is also mentioned as a constant source of "very profitable business since early 2009." Raul Gorrin and Gustavo Perdomo shells (Vineyard Ventures and Mahogany Commercial S.A.) are also mentioned throughout in connection to the Obertos.

Back to the Banco Espirito Santo email, Violet Advisors' EFG account 584684 received $1 billion worth of PDVSA transfers between 21 March and 11 April 2012:

The Obertos also seem to be associated to Derwick Associates' partnership with Gazprom at PDVSA / Gazprom joint venture Petrozamora. A presentation made by Santina Restifo -with Seguros Venezuela (Oberto's insurance company) and BBO Financial Services (Obertos' daddy's very own bank)- and seen by this site, suggests the Obertos might own 8% of Derwick's 49.44% stake in Gazprombank Latin America Ventures, the Amsterdam shell incorporated by Gazprom to partner with PDVSA in Petrozamora.

So the question is: why if Raul Gorrin and his crew have been sanctioned in connection to Matthias Krull (indicted / charged) and Francisco Convit (indicted / declared fugitive) money laundering scandal at PDVSA, Luis and Ignacio Oberto continue to live in Miami as if they did nothing? Remember the above refers to money laundering transactions in March / April 2012 at EFG Bank.

Then there's Meinl Bank, and through Compagnie Bancaire Helvetique, as per EFG Bank and confidential sources, the Obertos / Ramirez did another $2.75 billion worth of a $4.25 billion total. And yet, the architects of that other tranche of the scam (Obertos, Rafael Ramirez, Charles Henry de Beaumont, Joseph Benhamou and Danilo Diazgranados) are still to be indicted.

Is this a case of some criminals being more equal than others? This is just one exhibit of the sort of business that Rafael Ramirez conducted at PDVSA. 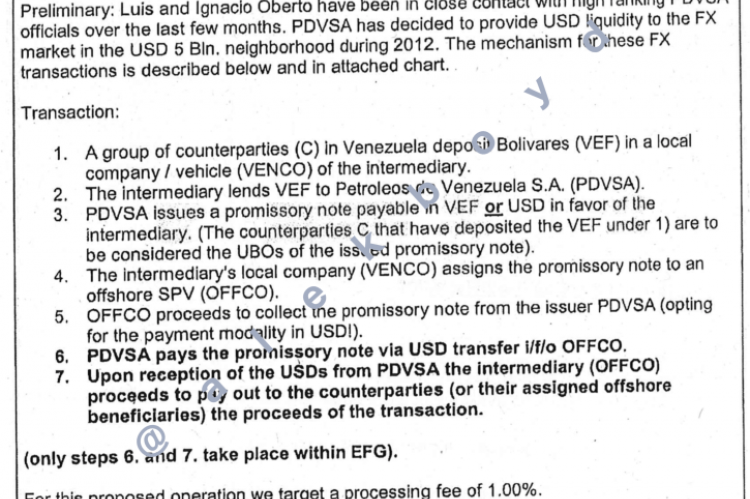