UPDATED* - The first major scandal involving humanitarian aid funds was exposed by Orlando Avendaño, at Panampost, in June 2019. Delegates of Juan Guaido in Colombia (Rossana Barrera and Kevin Rojas) were caught fiddling with expenses, inflating numbers of military defectors that had crossed the border to support Guaido, and having a jolly good time with money earmarked to humanitarian relief, while letting donated food go to waste. But before that, in February 2019, there was another episode, where Freddy Superlano and his assistant Carlos Salinas were partying with prostitutes in Cucuta, who not only poisoned Superlano and Salinas but made away with thousands of dollars in cash that Superlano had with him. Again, funds for humanitarian relief efforts.

An article by PanamPost, written by Orlando Avendaño, accused Juan Guaidó’s delegates of stealing money and resources that were supposedly destined to resolve the situation of abandonment of deserters of the Venezuelan Armed Forces in ​​Colombia.

USAID claims in its Venezuela page that some $472 million have been earmarked in fiscal years 2017 - 2019 as part of Humanitarian Funding for the "Venezuela Regional Crisis Response". However there's sheer opacity as to how exactly funds are being disbursed / spent since Juan Guaido claimed to be interim president in January 2019.

Consulted sources familiar with the ways of USAID told this site that, generally, approved funds are distributed to different institutions, such as National Democratic Institute (NDI), International Republican Institute (IRI), the Panamerican Development Foundation (PADF), and Freedom House. Projects must be submitted and, upon approval, funds are then sent to whichever organization requesting them.

A search for recent financial reports regarding Venezuela expenditure, however, returns no results. Avendaño stated in his June 2019 exposé that Miguel Sabal was Juan Guaido's point man for "everything related to USAID". Below, Sabal explains what his foundation Futuro Presente is about (organisation of grassroot youth movements).

Documents leaked to this site, related to a PADF program called Food for Progress, indicate efforts to "jumpstart the recovery of the Venezuelan Agricultural sector". The project goals are to "reduce hunger and improve food security" in a sustainable way in Venezuela's rural areas.

Sabal's Florida-registered foundation, Futuro Presente, appears as one of the recipients of PAFD program funds. Futuro Presente also appears to be related to Yon Goicoechea, another Voluntad Popular leader close to Guaido.

Neither Sabal nor Goicoechea had anything to do with agriculture, as far as this site could determine. While it is understandable that USAID channels funding for political programs through such unrelated matters, a source has informed this site that given the opaque and unaccountable way in which Guaido folk are using humanitarian aid funds, a formal complaint has been filed with William Steiger, USAID director.

According to a pdf document in this site, Food for Progress Venezuela program is to last 3 years and has a budget of $8 - $10 million. It goes on to describe its aim as "This project will require substantial coordination and cooperation with the Government of Venezuela (GoV), USDA, the U.S. Embassy in Caracas, and private sector stakeholders and tremendous flexibility on behalf of the Implementing Partner (IP) to effectively execute activities in an evolving context and challenging environment." It adds "The implementing partner will work with USDA/FAS and the U.S. Embassy in Caracas to identify key partners and stakeholders."

Requests for comments, as per amounts disbursed, recipients, vetting, aims, deliverables, etc., have been sent to PADF, USAID, NDI, IRI and Freedom House.

It is imperative to keep in mind the moral compass of some of the people involved here. Freddy Superlano was recently exposed for issuing exoneration letters to Alex Saab, the Colombian thug who became an overnight billionaire thanks to Nicolas Maduro. Juan Guaido and Freddy Guevara, two of the highest leaders of Voluntad Popular, were caught doing the exact same thing for Mauro Libi, another thug of Saab's ilk. Moreover, connection between Alejandro Betancourt and Guaido's closest relatives is now common knowledge.

Guaido's interim presidency recently announced its interest in taking over TELESUR, the chavista propaganda channel modelled on Russia Today that broadcasts across the Americas and is presented as some kind of trustworthy news service by The Intercept. Funding requests to that effect have allegedly been presented already, according to people familiar with the affair. 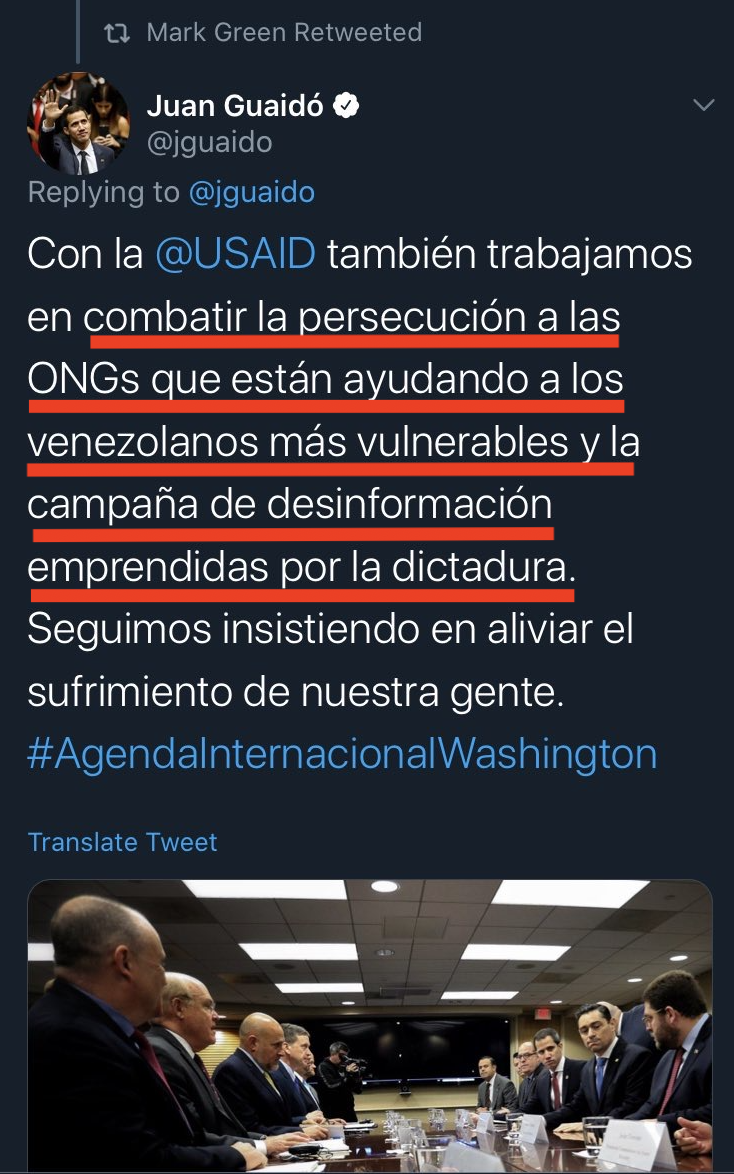 UPDATED 07/02/2020: part of Juan Guaido's charm offensive world tour was a stop over in Washington, where he met Trump, was the star of the State of the Union speech, and visited with USAID, State, etc. Upon publication of this article, sources in DC informed this site that Guaido, and his crew, were incensed and looking for ways -legal and illegal- to silence this site. We are proud here of having no fans, on either side of Venezuela's political spectrum, for that means that we're very good at what we do.

Guaido, however, continues showing his true colors. Venezuelans are yet to hear from him regarding misuse of humanitarian funds on booze, prostitutes, travel, etc. Guaido, in fact, has not said a word about his father's little meetings with Alejandro Betancourt in Madrid, did not say a word either on arrest of Betancourt's partner Francisco Convit, a DoJ-wanted fugitive, continues to be surrounded by the likes of Freddy Superlano... #ChavezdeNaiguatá

His latest effort to dismiss perfectly legitimate criticism in this topic, is a tweet saying what's reported above is basically chavismo's "disinformation campaign".

We are still to hear any explanation whatsoever, as to what political organizations run by some of his closest collaborators are doing in terms of agricultural programs...

Requests for comments, as mentioned above, have not been answered. One thing is absolutely certain: it won't be Guaido the one chasing the corrupt that have pushed Venezuela to its history's biggest humanitarian crisis. 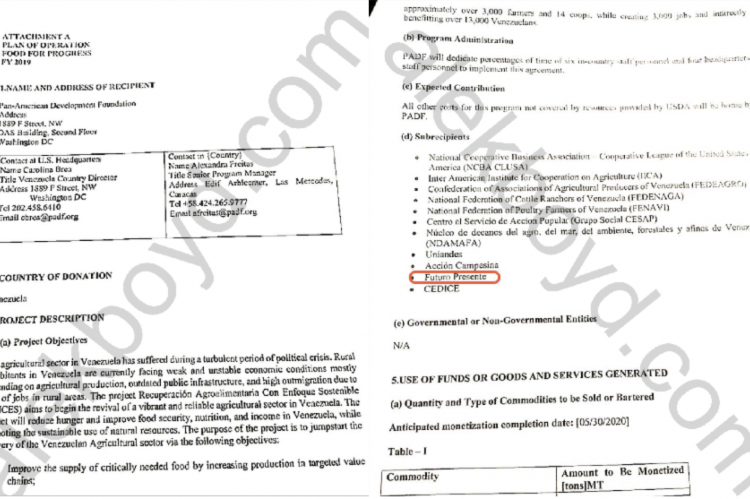