This site has been keeping tabs on Frank Holder and FTI Consulting ever since 16 October 2012, when I got a phone call from FTI Consulting's Maria Jose Tobar, trying to find my home address. This was the first ever Derwick Associates attempt to silence my work exposing their corruption. This morning I got a "Notice of DMCA removal from Google Search" in my inbox. It refers to an article entitled "Hey OFAC, want Diosdado Cabello? Get Frank Holder", published on this site 10 September 2017. The party "filing" the DMCA notice claimed the following according to Lumen Database: "I am writing this letter on behalf of nouvellesexpress. No one is authorized to perform, exhibit, reproduce, transmit, or otherwise distribute the above-mentioned work without the express written permission of the copyright owner, permission which has not been granted to www.infodio.com"

Let me revisit the chronology, to determine validity of that DMCA removal request.

On 14 September 2017, someone "called" Grant Robertson "posted" a copy of "Hey OFAC, want Diosdado Cabello? Get Frank Holder" in the blog nouvellesexpress.blogspot.com.

On 25 November 2019, Nouvelle Esexpress (sic) filed a complaint to Google.

On 29 November 2019, Nouvellesexpress.blogspot.com updated its version of my article.

That is, these thugs are using a word by word copy of my work for their copyright infringement claim.

Notice that Google does not have a cache of nouvellesexpress.blogspot.com post. It has, as of this writing however, a cache of the original article published here. A search in bing.com only shows original article published here. Google search, whose result get updated unquestionably faster than any other search engine, does not have a record of that post dated 14 September 2017 published in nouvellesexpress.blogspot.com.

Furthermore, as of this writing, Google images has no trace of images used in nouvellesexpress.blogspot.com post.

So what's happening here? Very simple. Venezuelan criminals, and their associates / employees up north, have learned how to game not only search results, but quite a lot more. Thus, a genuinely looking DMCA notice is nothing but a farce. They've been at this, complaining about investigations published here at infodio.com, since day one.

Frank Holder and FTI Consulting have been retained by a true who's who of Venezuela's criminality. Past clients include Derwick Associates, David Osio, Moris Beracha, Rafael Sarria, Diosdado Cabello, Ricardo Fernandez Barrueco, Danilo Diazgranados... and now, it appears that either Holder or FTI Consulting, just one day before the Washington Post broke the hugely embarrassing story about Rudy Giuliani's connection to Alejandro Betancourt, took (useless) measures to eliminate from Google search trace of its relationship with Venezuela's thuggery.

What pisses me off, well beyond comfort, is that when I file DMCA notices with Google, or Instagram, or Twitter, for genuine unlawful use of my copyrighted material, I get either crickets, or stupid template replies from Google, such as "we remain concerned that your copyright notification is not valid...", or Instagram's "Based on the information you’ve provided, it is not clear that the content you’ve reported infringes your copyright. It appears that the content you reported is being used for the purpose of commentary or criticism."

Chavistas, and their employees, CAN use my material, and infringe my copyrights, "for the purpose of commentary or criticism", but when I do it, well... Chavistas spend top dollar, I don't. That's the difference. 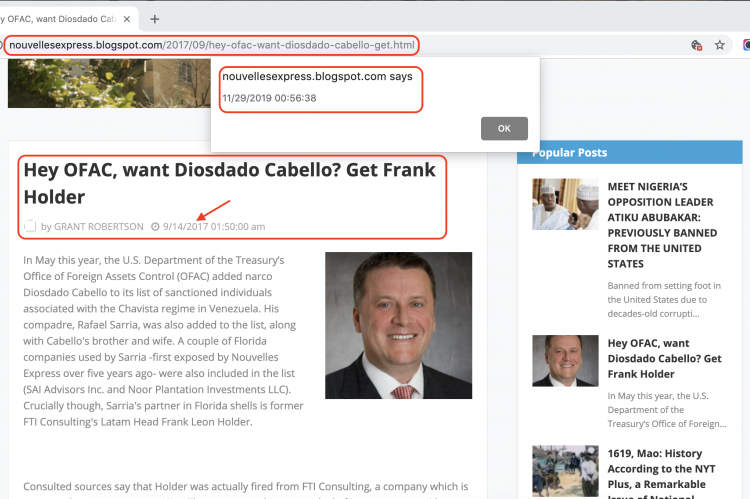