Local sources in Venezuela reported yesterday the assassination of Leonardo Santilli, a PDVSA contractor. Santilli was already in the crosshairs of U.S. Department of Justice (DoJ) for bribing PDVSA officials to obtain procurement contracts, which is PDVSA's standard operating procedure. The novelty here is that Santilli appears to have been hit by contract killers, allegedly due to his disposition to collaborate with DoJ.

This site keeps hearing about many Santilli-like Venezuelan thugs that are actively "collaborating" with DoJ and other U.S. federal agencies. In fact, questions put to people familiar with ongoing DoJ investigations are almost invariably replied by claims that such and such has not been indicted / arrested "because he's collaborating". Every Venezuelan thug worth his salt seems to be "volunteering intel" to the feds, therefore the looting that has pushed Venezuela into a humanitarian and political crisis that has rocked the region will be the largest financial crime ever to have no culprits.

Ask about Rafael Ramirez and someone will say he is collaborating. Ask about Derwick's Alejandro Betancourt and Rudy Giuliani will say his criminality is a "matter of national security". Ask about Raul Gorrin and someone will say "oh, but he's helping the administration with negotiations between Maduro and the opposition." Ask about Luis and Ignacio Oberto and someone will say "they're talking to DoJ." Ask about Danilo Diazgranados, Charles Henry de Beaumont, David Osio, Armando Capriles, the Gonzalez Oque brothers, Eduardo Travieso, Francisco D'Agostino, Oswaldo Cisneros, Alessandro Bazzoni, Gerardo Pantin Shortt, Wilmer Ruperti, the Gill brothers, etc., and same answer comes back: "they are talking."

Santilli was also "talking", or about to talk. However his killing is something this site has not seen before. Boligarchs and bolichicos do not get killed in Venezuela. Quite the contrary in fact. An accusation, or even the allegation of an existing criminal investigation into their activities by DoJ, seems to be the only currency accepted by chavismo to allow these thugs to live lives of excess in Venezuela. There are plenty examples, but Raul Gorrin and Francisco Convit come to mind, both DoJ fugitives, both living like absolute monarchs in Venezuela. And let's not even mention narcothug Alex Saab.

Santilli got almost half of his "business" ($70.3 million of $146.6 million total) from PetroCedeño, a JV formed by PDVSA, France's Total and Norway's Equinor. Equinor is interesting for various reasons. Being a Norwegian entity, it is to be expected that killing of Santilli, a former business partner, will be protested in the strongest terms, Norway being a bastion of human rights defence and being chavismo's go-to country to "help with negotiations" with the opposition. It would perhaps cause reappraisal of activities of other Norwegian businesses operating in Venezuela, like Handelsbanken, who made proposals to PDVSA to help circumvent Treasury sanctions. Alex Arick, perhaps, will get a warning after what happened to Santilli.

But then, Santilli's services were also contracted by Rosneft (whose parent is very adept at contract killing in the global stage), China's CNPC, and Chevron.

This site does not believe contract killings is something that will affect, particularly, chavismo's commercial partners, i.e. the Boliburgeoisie. There's got to be something more about Santilli's killing than what's being reported. As way of example, Carmelo Urdaneta Aqui was in Venezuela till recently, no one had put a contract killing on his head when he crossed the border to Colombia, to hand himself over to the feds, after the feds had arranged for his relatives to be extracted from Los Roques, which almost certainly had been greenlighted by some big chavista boss, to be flown to the U.S., to plead not guilty... So American law enforcement went through all the trouble to spirit people out of the country and negotiate with Urdaneta Aqui, for him to plead not guilty while on U.S. soil, and "contract killers" did not do anything to stop it? 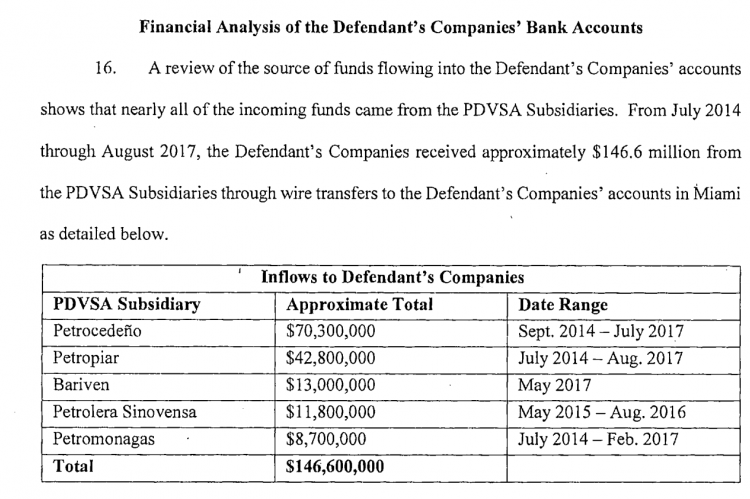