This has been a good week. Thanks to a ruling from an administrative tribunal in Switzerland, the local media is, finally, waking up to a reality we alerted authorities about in late March 2016: Alejandro Betancourt, main thug of Derwick Associates, not only uses Swiss banks like EFG, Julius Baer and Compagnie Bancaire Helvetique to launder what he's stolen in Venezuela, but IS a Swiss banker himself. Here's what we published then: "Derwick had previously done questionable deals with Gazprombank, while some of its American associates (Joe Bradford) had been Gazprom’s employees in the past. Sources report (unconfirmed) that Derwick and Gazprom have arranged some deals through a Swiss bank called Banca Credinvest (where Betancourt may be a shareholder), allegedly related to Antonio Pardo Andretta, brother of this other Pardo."

Little after that post, we got corroboration from a source of Betancourt's 4.997% stake in Credinvest. This source, familiar with Derwick's operations, told us "...some of the derwick guys are small shareholders in banca credinvest (all below the public notification level of 5%). they have a substantial amount of their assets there..." (sic)

This leak sent us into a research adventure. In September 2017 we posted a map of Betancourt's "business interests" at that time, where we show Banca Credinvest already as part of Betancourt's holdings. We knew Betancourt was involved for he appeared in a list of shareholders behind proposed formation of HBC Luxembourg S.à r.l. shared with us. We found, and exposed, almost exact corroboration of proposed shareholding in Luxembourg's register of companies.

Still, no Swiss media, or any other for that matter, was on Betancourt's case in this particular. Had it not been for Betancourt's supreme stupidity, of getting into lawsuits with Switzerland's financial watchdog FINMA, his shareholding of Credinvest would still probably be something limited to the confines of this site.

But what's truly remarkable, is that despite the fact that news is out, there's so much still unknown, and unreported in traditional media.

Francisco Convit who is a 50-50 partner of Betancourt in almost every scam done since 2009, and is currently a wanted fugitive of the U.S. Department of Justice (DoJ) for his involvement in a $1.2 billion money laundering scheme, is also a Banca Credinvest 4.997% shareholder.

Dieter Staubli, former EFG banker that assisted Luis and Ignacio Oberto in laundering, at the very least, $1.5 billion in yet another gigantic ($4.5 billion) graft scheme set up at PDVSA BY Betancourt and Convit, is also a Banca Credinvest 4.997% shareholder. It is very likely he is somebody's proxy.

Ricardo Lugo, someone who has gone almost unnoticed, but is equally involved in all manner of corruption with Alejandro Isturiz Chiesa (wanted by DoJ and on the run) and Luis Carlos de Leon (indicted, arrested in Spain, extradited to U.S.), was / is also a Banca Credinvest 4.997% shareholder.

Rupert Spillman is the father in law of Antonio Pardo, the clown who appeared in the Sochi winter games representing Venezuela. Pardo also comes from a distinct family of Caracas thugs, and is the brother of Guillermo Pardo, partner in turn of Luis Oberto. Well Spillmann is also a 4.997% shareholder of Banca Credinvest, another straw man probably.

Sources have told this site that as much as $300 million worth of deals between Derwick Oil & Gas (another Betancourt / Convit shell) and Gazprombank Latin America Ventures (read Derwick / Gazprom / Boris Ivanov / Russia's FSB), were structured through Credinvest.

But Credinvest not only has, or has had, hundreds of millions from Betancourt and Convit: Nervis Villalobos, one of Rafael Ramirez favourite operators and contractor of Derwick, is believed to have / have had hundreds of millions there too. Then there's the meteoric growth of Credinvest's assets under management since Venezuelan thugs became involved.

Credinvest has its own pedigree of course. Leodan Bank transferred to Credinvest operations and clients upon a scandal involving Florian Homm, a German criminal in the mold of Credinvest's latter shareholders.

Were FINMA probing authorities serious about conducting a forensic investigation into Credinvest's money laundering, it is almost certain the bank would be shut. It is a perfect target for one of FinCEN's money laundering concern advisories. 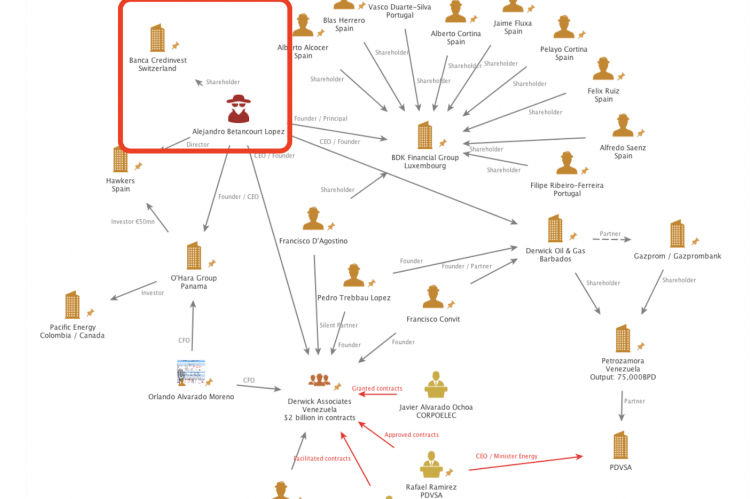