In May this year, the U.S. Department of the Treasury’s Office of Foreign Assets Control (OFAC) added narco Diosdado Cabello to its list of sanctioned individuals associated with the chavista regime in Venezuela. His compadre, Rafael Sarria, was also added to the list, along with Cabello's brother and wife. A couple of Florida companies used by Sarria -first exposed in this website over five years ago- were also included in the list (SAI Advisors Inc. and Noor Plantation Investments LLC). Crucially though, Sarria's partner in Florida shells is former FTI Consulting's Latam Head Frank Leon Holder.

Consulted sources say that Holder was actually fired from FTI Consulting, a company which is meant to have a great reputation. There seems to be a great deal of ignorance stateside pertaining the actions of FTI-associated swindlers like Holder, or Vicky Price. Holder is believed to be deeply embedded not only with Cabello, but with Rafael Ramirez. Sources claim Holder sold SAI Advisors & Noor Plantation-like shell structures to Cabello, and to Ramirez, for millions, with usual aim of hiding the proceeds of massive corruption rackets. If Holder's track record in Argentina, Brazil and Venezuela is anything to go by, it is highly likely that those two shells in Florida are just the tip of the iceberg.

The fact is, senior FTI Consulting execs, like Holder, like Price, have a moral compass so removed from true north that any mention of "good reputation" is laughable. America seems to be plagued with such "reputable" enterprises. Not long ago, Fusion GPS was, in the words of one apologist, "...seriously savvy at finding extremely hard-to-locate — and even more difficult to understand and contextualize — documents and other intelligence..." Not savvy enough, evidently, to get the unavoidable stench of its Venezuelan clients. And there are plenty others, so-called reputable fellows, deeply involved with the most obscene chavista graft: David Boies is another exhibit.

FTI Consulting, Fusion GPS, David Boies, Al Cardenas, Adam Kaufmann, the Mooch... no one will ever accuse them of being stupid, or naive. But when it comes to their deals with corrupt Venezuelans, it is as if U.S. media and U.S. law enforcement have blinkers that obstruct what can only be described as accesories in rampant corruption and criminal activity. FTI knew exactly what they were getting -a rather large list of phenomenally wealthy Boligarchs- when it bought Holder's joint. Ditto Fusion GPS when Derwick Associates knocked on their door, or Boies when he was cooking with Brennan and Ruperti the PDVSA US Litigation Trust deal. Dollar signs is what they see, and what they get, irrespective of dirty origin and the terrible consequences left in its wake.

The U.S. Department of the Treasury must be commended for its sterling efforts in bringing some kind of redress to the Venezuelan people. It is, along other Federal Agencies, the only law enforcement agency bringing to justice the thugs that have destroyed Venezuela, and have caused the largest man-made humanitarian crisis the American continent has seen. Though it could do so much more. It is unlikely that Cabello and Sarria will ever see the inside of a jail cell, but Holder is just down the road. Holder is an American citizen. Holder can be arrested very easily indeed. So the message to OFAC is: want to get Cabello, and his "wealth"? Get Holder. 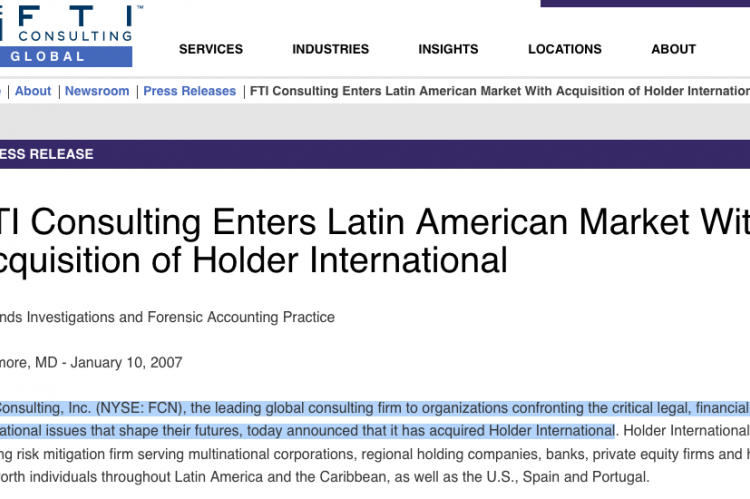