Readers of this site might remember the series of exposés published in the Spanish version of this site, about Rafael Ramirez's direct involvement in approving a $4.5 billion money laundering scheme set by Luis & Ignacio Oberto Anselmi. That deal have other parties involved: Nervis Villalobos, Alejandro Betancourt and Francisco Convit, Juan Andres Wallis Brandt, Danilo Diazgranados, and then, of course, Swiss banks EFG, Compagnie Bancaire Helvetique, Julius Baer, etc. This site has now obtained documentary evidence that shows that in the PDVSA - Sinohydro project agreement (Phase I: 772MW Planta Centro and 200MW La Cabrera), at a cost of some $1.35 billion, Ramirez forced his first cousin and trusted lieutenant Diego Salazar into the deal, for a cool 10%.

Ramirez is the darling of serious publications like Argus Media and EFE these days, which have no trouble locating his "secret" whereabouts in Italy to ask -very kindly- all sorts of nice questions about his time as concurrent PDVSA CEO and Minister of Energy in Venezuela. No one seems to be willing to grill Ramirez on the rampant corruption that he not only allowed but actively fomented, and that eventually obliterated PDVSA. Since this site is about exposing corruption, here it goes.

On 22-23 December 2009, Ramirez requested an emergency power plants proposal to Sinohydro, a fully owned Chinese State company. This was done within the framework of wide-scoped cooperation agreements between Venezuela and China, funded -mostly by China- to the tune of $50 billion.

On 3 February 2010, Ramirez -for and behalf of Petroleos de Venezuela S.A.- signed an MoU with Sinohydro's Liu Qitao. The scope of the contract was:

"WHEREAS PDVSA is desirous of having power plants on the emergency basis with installed capacity of 900MW in six (6) to nine (9) months, as Phase I, and subsequently increased up to 15OOMW within twerve (12) months after the contract is signed and downpayment is received by Sinohydro as Phase II. Eventually the capacity is to be increased up to 2,700MW within another one year as Phase III."

Contract then goes into platitudes about how eager and thankful Sinohydro is for the commission, etc.

On 21/22 March 2010, PDVSA and Sinohydro held contract negotiation meetings in El Palito refinery, to iron things out and to lay the groundwork for contract. Ricardo Coronado signs for PDVSA and Yuan Yang for Sinohydro.

But here comes the kicker: on 20 July 2010 Sinohydro signs a Consulting Service Agreement for "Projects to be executed in the Bolivarian Republic of Venezuela" with Highland Assets Corp., read Diego Salazar Carreno, read Ramirez's first cousin. Yang signs on behalf of Sinohydro and Luis Mariano Rodriguez Cabello (Salazar's proxy and right hand man) on Highland Assets' behalf. The contract comes with a Project Memorandum, which describes scope of business, and includes Planta Centro and La Cabrera: 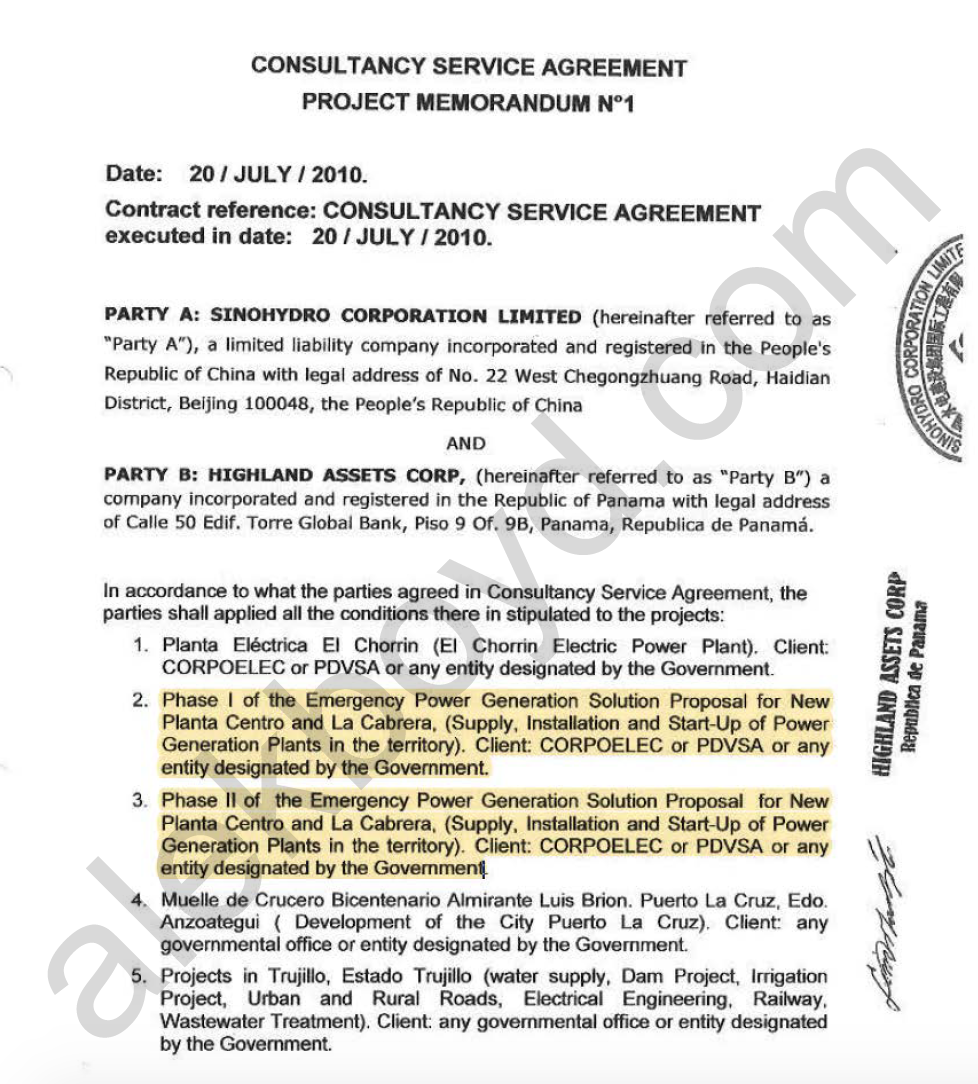 Let's pause here for a moment. By July 2010, Sinohydro had already signed a perfectly valid contract with PDVSA, and an MoU with Ramirez, for the same power plant projects. Salazar had no business whatsoever there. Why was Salazar allowed into the deal? Simple: article 5 of Sinohydro - Highland Assets consultancy services contract regarding "Consultancy services fee", reads "The total Consulting Service Fee is equivalent to 10% (in words ten percent) of total contract price less VAT. (hereinafter the "Contract Price")."

That is, having already signed an MoU with his Sinohydro counterpart, Rafael Ramirez brought his cousin Diego Salazar five months after the fact, so that he could get 10% of $1.35 billion.

A criminal probe in Andorra exposed Ramirez's side deals with PDVSA. It was not only with Salazar he was involved with: Villalobos, Javier Alvarado, Eudomario Carruyo, Ramirez' brothers, uncle, and other relatives, his PA, his secretary, his bodyguard... In all, some $1.3 billion worth of "commissions" were laundered just by the Cierco brothers at Banca Privada d'Andorra for Ramirez's clan.

Sinohydro is just one exhibit. The modus operandi of extracting commissions -by imposing his trusted lieutenants in every major deal- applied to all projects related to the $50+ billion Venezuela - China bilateral agreements. The Chinese were only too happy to find such corrupt comrades to advance their commercial interests. 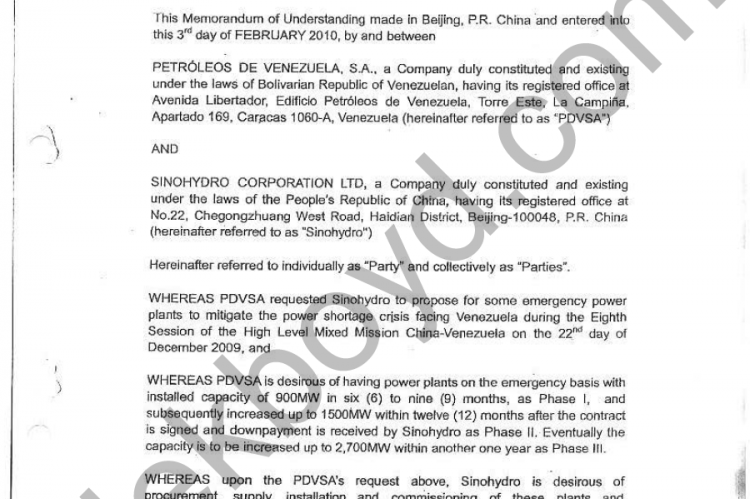