The sheer amount of #fakenews circulating is staggering. A clueless, ignorant adolescent, being "person of the year" provides just the explanation needed to grasp the sort of intellectual rigour in editorial rooms across the world. Reuters, a news agency that has plagiarised without attribution stuff published here, came yesterday with a totally unsubstantiated piece (based on "two people with knowledge of PDVSA data"), suggesting PDVSA's crude output had jumped 20%. Any person with a subscription to maritime data services can see how crude offtake has increased recently. But crude offtake does not equate to PDVSA output increase.

PDVSA's storage reached near-capacity levels owing to U.S. Treasury sanctions regime. Many of the suspects that were doing usual business with chavismo took pause, to appraise consequences of continued trade under imposed sanctions. Reliance, for instance, took a step back. It didn't want to imperil its U.S. operations because of Venezuela. That has changed. ENI and REPSOL were, for a while, cagey on PDVSA. REPSOL specially, after Elliott Abrams reminded them behind the scenes of the potential blowback. That has also changed. Chevron, which kept clear of Venezuelan docks, started lifting again in October.

Then, there are small players, like Dragoslav Ilic's MS Internacional, Francisco D'Agostino's and Oswaldo Cisneros' Elemento, and Procerium (a two bit outfit controlled by Rosneft), picking on all kinds of deals that others consider too risky.

There is shipping data, to corroborate an increase of crude offtake. What neither Reuters, nor anybody else reiterating its BS, have is data to back up "Venezuela’s crude output in November jumped more than 20% from the prior month". Come January, when storage levels decrease due to increased offtake, we shall see whether that jump in output is real, or not.

There's an equally miraculous "economic recovery" being touted about. We assume the "two people with knowledge" have also been to El Tolon, in Las Mercedes, to buy Christmas trees for the first time in many years. That, right there, is best indication that Venezuela's economy is "getting traction". What these "experts" fail to inform, is that the two phenomena were caused by the same measures.

While sanctions caused a momentary freeze in oil exports, it also made increasingly difficult for Venezuelan thugs to spend their ill gotten money abroad. It has also made international travel, to that lot, that more complicated. The resulting consequence is that wanted fugitives, like for instance Raul Gorrin or Francisco Convit who are flush with cash, are having to do staycations and are "betting" on Venezuela's privatisation plans.

Add remittances. Millions of Venezuelans have joined the diaspora, and most are sending whatever they can to relatives back home. That huge amount of out-of-budget income enters the economy. Maduro's decision to dollarise was a clever move, and nowadays Venezuelan folk are transacting almost everything in USD. That didn't cost chavismo a penny, and in that dollar-fest narco money joins the flow completely undetected. It is the perfect recipe: a totally corrupt regime that has the measure of every single banker and entrepreneur, allows the economy to be flooded with remittances, and then opens the floodgates to all black money held by its criminal associates.

In almost every scenario this would be described as money laundering, but given this is Venezuela, it is called "economic recovery". It would be impossible to produce datasets showing increased industrial productivity, employment jumps, but that's irrelevant.

The sanctions regime has benefited a few operators. Russia is the big winner here. What JP Morgan and co lost VTB, Gazprom and Evrofinance won. It is quite difficult to understand how the Trump administration concluded that a haphazardly implemented sanctions regime would knock Maduro out. I often see this is as a medieval siege, on a citadel with 17 access points where, alas, only a couple of drawbridges are under threat. Secondary sanctions have got to be part of the arsenal. Gazprom and Gazprombank, for instance, were sanctioned under Ukraine-related measures, yet no word on its Venezuelan activities. No word on its Evrofinance stake. No word on its association with wanted-by-DoJ fugitives (Francisco Convit). No word on its current deals with Nynas. Quite inexplicable, but very profitable to a few, like Rudy Giuliani... 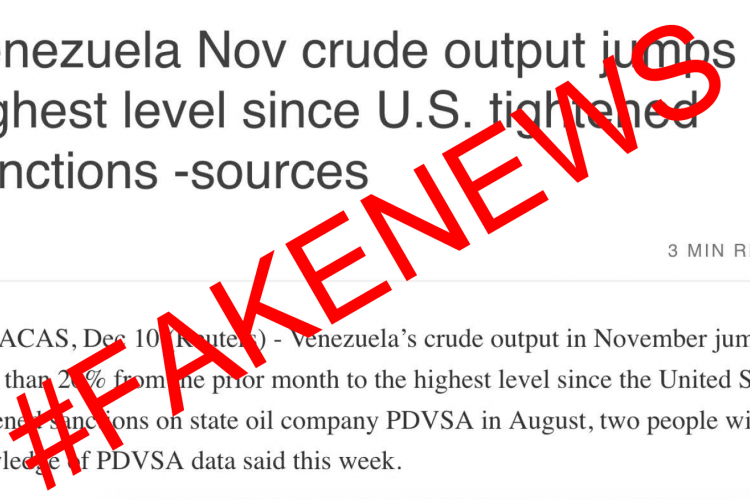