UPDATED 26/07/2021 - A few days ago a source informed this site that Bitumina Industries Limited had filed for bankruptcy in London. We tweeted about it and put the question to the London Gazette, which kindly came back today with corroboration. What this means is that Nynas largest shareholder (Bitumina's 49.9%) is out of the game. The latest from Bitumina follows a "reorganisation" process over there in Sweden that was dodgy from all angles.

Nynas had two main stakeholders: PDVSA with 50.1% and Finland's Neste with 49.9%. Treasury sanctions forced Nynas into near bankruptcy. Banks stopped servicing Nynas once sanctions on PDVSA and its subsidiaries were announced. Nynas used to get all of its feedstock from Petrozamora, the JV formed between Corporación Venezolana de Petróleo and Gazprombank Latin America Ventures, the Dutch nondescript shell formed by Derwick's Alejandro Betancourt, Orlando Alvarado and Francisco Convit (as minority partners) and Boris Ivanov in the majority representing FSB interests.

Bear in mind that Petrozamora was the main provider of crude to Nynas. Notice also the composition of Petrozamora, and this is key: there is no official mention, anywhere as far as this site's research goes, of GPB Energy Services B.V. When Treasury sanctions kicked in, creditors obviously had to be paid. There were a few billion Swedish kronor scattered around, and so the Derwick thugs got in early, managed to appoint legal counsel, and assumed -along Russian partners- PDVSA's representation in Nynas' reorganisation process. Those responsible for Nynas' reorganisation / debt restructuring process accepted GPB Energy Services B.V. -and not Corporación Venezolana de Petróleo or Gazprombank Latin America Ventures- as legitimate party to debt claims (over $100 million). How exactly the Derwick thugs manage that is down to their forte: some folks must have gotten bribed somewhere.

A syndicate of bank creditors was also formed (Skandinaviska Enskilda Banken AB, Deutsche Bank, Burlington Loan Management DAC, Foxford Capital L5 DAC). They are owed, collectively, some $234 million. Sources familiar with proceedings told this site that Davidson Kempner got the lion share of those $234 million on cents on the dollar. Deutsche Bank is meant to have acted as conduit.

Therefore, there are creditors in one corner with valid and recognised debt claims against Nynas. In another corner there's PDVSA, which had to dispose of its majority stake due to Treasury sanctions: 35% of its 50.1% was parked in a Swedish foundation controlled by the management team appointed at Nynas upon reorganisation process conclusion. In theory, nothing can be done with that stake until Treasury lifts fully its sanctions on PDVSA. And then there's Bitumina, which acquired the other 49.9% that was owned by Neste. Neste had written off the interest it kept at Nynas (booked at €34 million), as explicitly laid out in its 2019 report.

Neste's 2020 annual report, however, has the following about Bitumina:

"Neste AB has sold its 49.99% shares in Nynas AB to Bitumina Industries Ltd on September 2020. Total consideration is subject to provisional adjustments which could change the final consideration. Loss on sales is presented as share of profit (loss) of joint ventures in the consolidated statement of income." [bold added]

Questions have been put to Neste as exact amount of consideration -if any- disboursed by Bitumina to date. Sources familiar with proceedings have told this site that Neste never got what was due.

Then Bitumina has a rather interesting list of shareholders. First one is Bernd Schmidt (wealth origin?). Second largest is one Uladzislau Punko. Go ahead, Google the name. This Punk(o) is all over investigations into use of Scottish Limited Partnership (narrow search to Vectorex Inc and Geotrans Inc) as preferred money laundering vehicles used by usual thugs in the usual dodgy jurisdictions. The only pertinent question here is: who is Punko fronting for?

How does Bitumina bankrupcy proceedings leave Nynas then? Nynas claims that it has refitted sufficiently its refineries to no longer depend on Venezuelan feedstock. However frantic efforts have been made by both Derwick thugs and others to keep that supply source and associated contracts running. Fascinatingly, U.S. Treasury missed all of it, to the point of lifting all sanctions on Nynas.

As customary, this isn't the last of it, and we shall update this developing story.

UPDATE 26/07/2021: through a press release, Nynas makes official acquisition of Bitumina's 49.9% stake by Davidson Kempner. No information on price of acquisition, ergo opaque as usual. This site repeatedly requested comments from Bernd Schmidt (head of Bitumina), which never came. It has been claimed Derwick's Alejandro Betancourt's hand was behind Bitumina's bankruptcy. 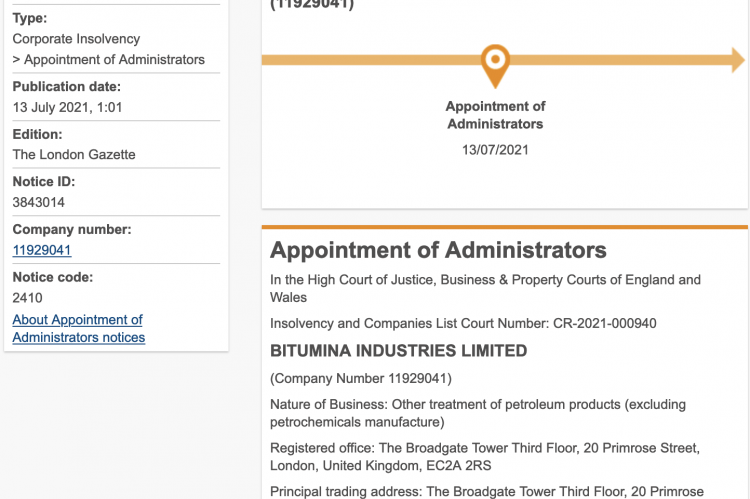