UPDATED - Further to Rosneft's recent "sale" of its Venezuela assets to new Roszarubezhneft venture, we've been trying to pierce the veil of fakenews about the move. Given that Petromonagas, Petroperija, Boqueron, Petromiranda, and Petrovictoria are joint ventures between Rosneft and PDVSA governed by Venezuela's Hydrocarbon's Law, we can confidently say that divestment of such assets, by announcement to the press, is completely illegal. Venezuela's National Assembly, controlled by opposition to Nicolas Maduro parties, has not discussed, let alone approved, any of it. Legal requirements of existing legislation governing such ventures have not been met. It is fairly reasonable to expect, from two parvenu thugs like Putin and Maduro, a transfer of little over $4 billion worth of State assets without much ado. Nonetheless, some proper reporting about the affair is in order.

On 28 March, Rosneft announced it was exiting Venezuela and selling its assets. News came after earlier announcement, in February, about transfer of Venezuela exports from Rosneft to TNK Trading International. It took Treasury folks about two weeks to add TNK to its SND list. In this cat and mouse game, between Putin / Sechin and Donald Trump's anti-Maduro policy executed by the Treasury Department, Rosneft must have thought, after protestation, that transfer of assets among its subsidiaries was going to cut it.

After imposition of Venezuela-related sanctions, Rosneft basically became the only party willing to show the finger to Uncle Sam. Reliance retreated. Repsol (for a while) and ENI retreated. Even CNPC retreated, leaving the field to Rosneft, its alter egos, and little dodgy operators that lacked wherewithal to efficiently and consistently dodge Treasury, whose sanctions, has to be said, forced Maduro into a greater dependence on Rosneft, which profited handsomely and turned trading Venezuela-crude and gasoline / heavy naphta imports into a debt-clearing exercise. In its 2018 report, Rosneft claimed to have $2.3 billion outstanding. Then, in November 2019, it said only $800 million were still owed. Its 2019 report, however, does not contain any indication as to exact amount. In any case, every single announcement from either Russia or Venezuela has to be questioned.

Recent divestment took place through a transfer of 9.6% of Rosneft shares to newly created Roszarubezhneft shell, which valued Venezuela assets at some 310 billion Rubles (~$4.2bn). It is not clear how Rosneft apportioned such value to its Venezuela assets, though it is sufficiently evident that Putin continues to do whatever he pleases with his Venezuela interests.

Official word on the deal, whether from Maduro or "interim president" Juan Guaido, is absent. Treasury is also silent, thus far. We've grown accustomed to see Russia making a mockery of any attempt to curtail its international activities. Underpinning all this, however, is the recent "deal" announced by Trump, whereby Saudi Arabia, Russia, Mexico and the U.S. agreed to cut up to 20 million barrels worth of output. Before the deal was reached, sources reported that Caracas agreed with it. In such context, parking shares of five producing ventures in some dodgy shell that could be reverted at the snap of a finger seems almost a stroke of genius. But then, there's the Chinese virus and its still to be determined economic impact. So what chance is there for Roszarubezhneft of recouping that "investment", or for chavistas to keep / increase output?

An article by Konstantin Sonin, criticising Sechin's antics was posted to Vedemosti, allegedly Russia's most important and serious financial publication. Sonin questioned Rosneft activities in Venezuela and specifically recent divestment, adding that Russia's public funds ("several billion") invested in that country will probably never be recovered. Difficult to imagine that one Russian entity is going to fork out billions of dollars to another, for some assets in a country shut from the rest of world, where investing in or associating with ruling regime is basically verbotten. Especially, if such transfer is illegal as per current governing laws, so we agree with Sonin's view. However the siloviki didn't, and ordered immediate deletion of Sonin's article.

Venezuela's gravitas in the world of oil -once a very influential OPEC member-  has disappeared, its future is bound to decisions way beyond its control. While it is exempt from announced production cuts and could pretty much do whatever it decides, it is impossible to expect any challenge to Rosneft's decision to "exit". Worse still from a Venezuelan viewpoint, there is no indication whatsoever as to who will Roszarubezhneft designate to carry on with activities in the five producing joint ventures that Rosneft allegedly abandoned. Are we to believe then, that Rosneft's Venezuela stake has just been written off?

UPDATE: later in May, Interfax reported the following:

"MOSCOW. May 14 (Interfax) - Russian state-owned oil company Roszarubezhneft has received control over 80% of the National Oil Consortium (NOC), via which Rosneft owned a major producing asset in Venezuela. According to data of the Uniform State Register of Legal Entities, LLC Private Security Company RN-Okhrana-Ryazan, which passed into the ownership of Roszarubezhneft at the end of April, became the owner of 80% of the NOC this week." 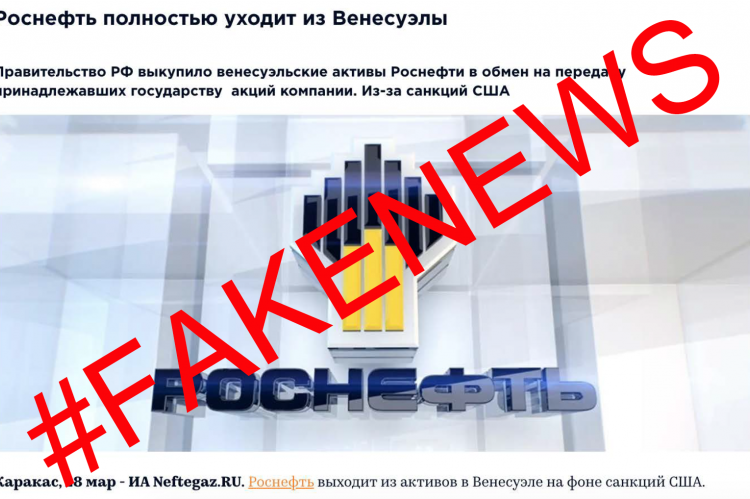