The latest regarding novel ways for PDVSA to continue laughing at U.S. Treasury sanctions involves an offshore jurisdiction that was never featured among usual suspects: Labuan International Business and Financial Centre. Companies registered in Labuan are a bit like the old bearer shares structures of other jurisdictions: UBO records related to any given company are only to be made available to enquiring parties if the UBO allows it. Labuan claims to observe FATF recommendations regarding obtention / hold of accurate UBO records.

Sources report that Jorge Andrés Gimenez Ochoa, current president of Venezuela’s Federation of Football, is the brains behind the move. Gimenez Ochoa claim to fame is to have been part of Delcy Rodriguez's detail, when she met in Madrid's airport with Spanish Minister José Luis Ábalos in clear violation of EU sanctions. In addition, Gimenez Ochoa has a rather colourful background, with stints in all sorts of things. But what made him specially attractive, to Delcy Rodriguez, to her brother Jorge, to Tareck el Aisami, and ultimately to Nicolás Maduro, is his alleged ability to move large amounts through Ensa Energia A.G., a shell registered in Labuan.

People familiar with Gimenez Ochoa's operations claim his MO is to get heavily discounted PDVSA crude, dispatched to Asia in tankers operated with AIS-transponders almost permanently off, where they float, sometimes months at at time, waiting to be offloaded at some point to Chinese clients. Once goods exchange hands, Gimenez Ochoa gets paid through Ensa Energia's accounts (for which he charges a nice commission), and remaining funds are then used to purchase and import foodstuff that a mate of his (Alejandro Arroyo* another thug of similar ilk / connections) packs into CLAP boxes (LOGISTICA Y ALIMENTOS EL MAZO, C.A.) that chavismo, in turn, deliver to "the people". The mechanism allows Gimenez Ochoa and Arroyo to profit on all sides of the trade. It's AlexSaab 2.0.

One of the people associated to El Mazo is Gilber Renee Mejias, yet another chap with a rather colourful past (drugs possession).

Gimenez Ochoa and Arroyo aren't the typical uneducated thugs that pullulate in chavismo. Both went to private schools / universities. Both belonged to a segment of society stridently opposed to chavismo. As the old saying goes, however, money talks and bullshit walks. Gimenez Ochoa's father was involved in all manner of corruption and had to go into the shadows for a while. Gimenez Ochoa appeared in the shrimp export business, jumped from there to construction and procurement with State institutions. A little later, the man's only 34, he became involved in football and ended up bagging the top job. All very revolutionary chic I must say.

Venezuelan football has been plagued with scandals in the past. It is worth remembering that when the FIFA scandal emerged one of the arrested in Switzerland was, of course, the Venezuelan chief of football. Gimenez Ochoa's tenure is unlikely to be any different, if his hanging with Delcy Rodriguez is any guide. His official work records show an association to Turismo Real C.A., nothing on construction, oil trading, football, imports / exports...

Discounting rampant corruption and his connections to Delcy Rodriguez and Tareck el Aisami, it is impossible to justify such a meteoric rise in such short time, specially in a country where millions of people are escaping a humanitarian crisis. Gimenez Ochoa's partner in Constructora 2GM C.A. is Antonio Luis Gonzalez Morales, in turn first cousin of Gilberto Morales, an associate of Armando "Coco" Capriles.

In its "IMPROVING GLOBAL AML/CFT COMPLIANCE: ON-GOING PROCESS - 22 February 2013" FATF welcomed "Venezuela’s significant progress in improving its AML/CFT regime and notes that Venezuela has established the legal and regulatory framework to meet its commitments in its Action Plan regarding the strategic deficiencies that the FATF had identified in October 2010." FATF further established that "Venezuela is therefore no longer subject to FATF’s monitoring process under its on-going global AML/CFT compliance process." It is quite inexplicable how Venezuela has not been kept by FATF as one of the world's preeminent jurisdictions where AML compliance is simply non existent.

In any case, the Labuan playbook shows the sophistication these new players have acquired. The fact that Gimenez Ochoa is not far removed from someone like Coco Capriles explains financial expertise. Trades happen in currencies, banks and jurisdictions unaffected by U.S. Treasury sanctions. The tragedy is that by the time Treasury gets wind of any of it (if ever), new structures / players are already in place. The truism that with the extradition of Alex Saab to Miami Maduro's operations and logistics were going to suffer just couldn’t be further removed from realities in Caracas. For Gimenez Ochoa is just head of one of many similar groups, of young turks that can rapidly put stuff in place so Maduro, the Rodriguez siblings et al can stay miles ahead and continue laughing at Treasury's measures.

This site sent a request to Sumarni Matnin, Corporate Relations & Information with Labuan International Business and Financial Centre. She said that aside from the public information that could be obtained by searching https://www.lfsacoral.gov.my/reefs/ "no other information available for viewing by third parties..." This site ran a search a few days ago and found that Theon Ali** (likely a proxy) was listed as the contact person, however current searches return no results.

*This site was able to establish identity of Arroyo: Alejandro Jose Arroyo Perez, DoB 12/04/1989, Venezuelan ID 18245167, Venezuelan passports 150922249, 134569332,  principal of a UK shell called Kronos Commodities Ltd, which deals in crude and other commodities and claims to have offices in London, Nevis, Dubai and Cyprus.

** Theon Ali is allegedly behind shells in Dubai (Emergio DMCC), Qatar (TFA and Company LLC) and Singapore (Greenberg Pte Ltd) that are being used in the scheme along Ensa Energia. Ali, however, is not the UBO. 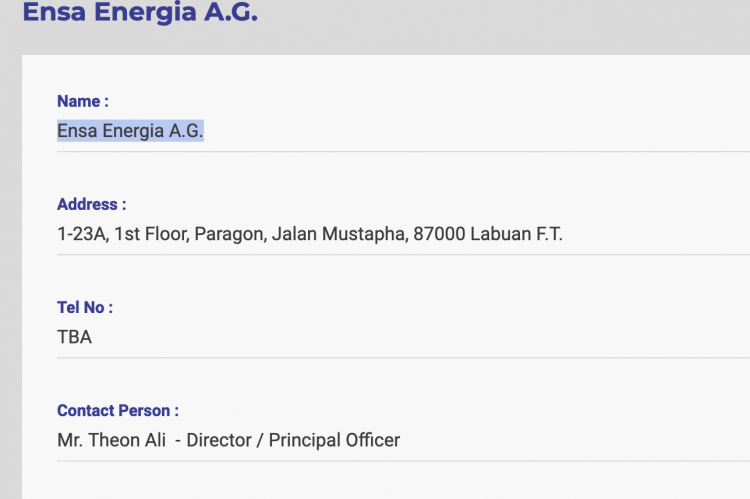